The art world has many lines of demarcation, and boundaries as if it were a real kingdom. It did once have royalty but those days are gone. However, it is still a world of battling warlords trying to carve out their little serfdoms, write their manifestos or burn the manifestos of others. Each is positive what they do is right and all else is weak. Nobody knows who rules or who makes up the rules only that there are rules. For the past 100 years or so they are still battling on whether or not photography is art. When does craft cross the line into art? Who gave the guy at the Times the authority to decide what great art is and what is not but more importantly why does anyone listen? It is like Chesterton’s description of the medieval period, “It was not a war of nations; but it was a rather widespread family quarrel.”
Everyone who picks up a brush, pencil or chisel and stands alone before a blank paper or hunk of rock is in the same sibling band. Or it is as in the metaphysical question GKC posed, “Are things so different that they can never be classified; or so unified that they can never be classified?” In aesthetics the answer is; Composition: make exist all together as one. Although Chesterton was not one to talk much about aesthesis I co-opted this GKC quote, “The wedding of Man with God and therefore with nature.” as a better definition of composition.

Elie Faure, a most respected art historian, was trained in medicine. He brought his scientific knowledge to bear in his study of the history of art, (best known is his History of Art (5 vol., 1909–21; tr. by Walter Pach, 1937)). As a scientist he could not help but to put things in classifications and sub categories. And as a scientist his writing definitely lacks soul. And most of his work is clueless as to how an artist thinks and works. He had nothing good to say about either Chesterton’s art or Gilbert’s opinion of modern art, (Time magazine March 1923).

“Once men sang together round a table in chorus; now one man sings alone, for the absurd reason that he can sing better. If scientific civilization goes on . . . only one man will laugh, because he can laugh better than the rest.” (GKC) a quote taken from The Humble Artist a review of Thomas Peters The Christian Imagination:G. K. Chesterton on the Arts By Eric J. Scheske

Faure and other “respected” art historians are like visitors reporting back from a strange planet, since they are unable to speak the language they can only comment on the appearance of things as if that were it’s most important aspect. Chesterton lives on that strange planet. The art historian will talk on and on about the process of seeing where Chesterton would talk about the joy of sight.

Chesterton was first trained as an artist, an illustrator in particular and thus that has been his classification. Illustrators have never been given their rightful place at the table. They are always looking in from the street like N.C. Wyeth and Norman Rockwell to mention a few of the famous examples. The higher up self proclaimed Grand Puba’s in the art world look down on illustrators for two reasons: the first is that their work is a visualization of someone else’s thought and the second is that they can make a living at doing it. This line of thought when carried through makes Michelangelo’s Sistine Chapel trite because it is after all just an illustration of the Bible and one in which he was well paid.

In 1892, at the age of eighteen, Chesterton left St. Paul's School. His drawings showed so much talent that it was decided that he should go, not to Oxford, but to the Slade School of Art. It was here that he was asked to write an art criticism paper. The rest as they say is history. It soon became clear that writing, not drawing, was Chesterton's primary talent and unique style. Style can neither be predicted nor imposed it grows organically out of any given epoch reflecting the needs, wants and desires of that epoch. And when the thin core of truth is tapped for all to drink from it transcends that epoch, this is what a genius does.

Elie Faure says: "Picasso was undoubtedly a great criminal, in the sense that he is largely responsible for the muddle which painting has got into latterly. It is from him chiefly that the younger artists have taken the notion of looking within themselves to interpret the outer world, instead of, like their elders, looking at the outside world to realize themselves. Because oftentimes they are unable to distinguish much of anything within themselves, you know what happens (They get themselves called crazy). That is Picasso's crime."

This is not the space to get into the merits of Picasso but I will say this about him that he became aware of his crime. He saw that young artists were abandoning the pursuit of truth to bow to novelty. Picasso stopped giving sound bites to the media because how they were twisted to the fit the mess others were making. Primarily among them is the notion that if you know what end of the pencil makes a mark you are an artist. This mess, this loss of the reality of absolute universal truth, has led to our current Dark Age of art.

Chesterton prophesized this new Dark Age of art when he discussed the artists of the "newer schools," for whom he sees little hope—“unless the rest of the world goes mad as well. The rest of the world has gone mad.” No, not a new Dark Age but a real Dark Age for the first was not dark at all it was filled with lightness and buoyancy of spirit, (as Chesterton explains in his books on Saints Francis and Aquinas). Why they call it the Dark Age is because it did not have gadgets. Now we have buckets full of gadgets but the world now is very dark and heavy in spirit. We have hardened our hearts. “The swiftest things are the softest things. A bird is active because a bird is soft. A stone is helpless because a stone is hard. The stone by its own nature go downwards, because hardness is weakness. The bird can of its nature go upwards, because fragility is force.” (GKC) Art today has definitely lost its force.

Chesterton’s art is soft and fragile in force. His line is simple and direct. Not unlike the early work of Aubrey Beardsley, like this one: 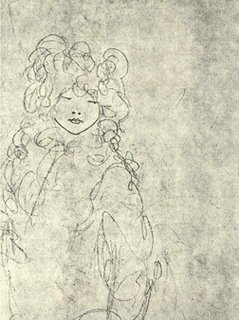 Chesterton refused to go there. He did not have to. And he wrote much on the debasement of spirit. "The new school of art and thought does indeed wear an air of audacity, and breaks out everywhere into blasphemies, as if it required any courage to say a blasphemy. There is only one thing that it requires real courage to say, and that is a truism."

Another polite stab critics make of Chesterton’s art is they call them “sketches” as if his renderings were not a complete thought. Here is a Picasso quote that I think Chesterton would agree with. “I need long idle hours of meditation. It is then that I work most. I let my mind float like a boat on a current until it gets caught on something. It gets precise.”
Picasso’s Femme et enfant: 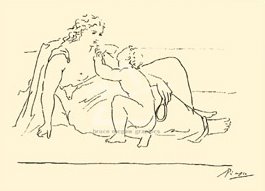 This process is well laid out in Orthodoxy. Chesterton’s writing and his art has precision.

The art he did for Belloc’s writings, The Postmaster General in particular, are enjoyable on several levels, first because they are works done for a friend so there is love in them but they are also works of simple and direct line. Line done with strength, power with out doubt, but mostly they contain a sense of mirth and joy that can not easily be found in the work of his contemporaries. 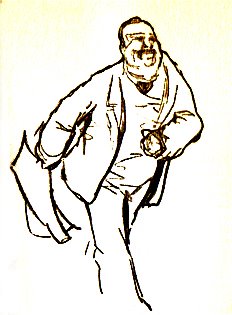 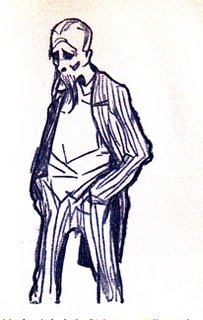 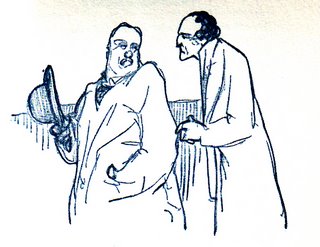 I wonder sometimes what would have happened if Chesterton was introduced to sculpture before writing? I think he would have pursued it because Gilbert was one of those rare individuals that had the ability to think in three dimensions. Then again I’m glad he was asked to write that paper and not to pick up a chisel.

On my sandwich board I wrote ‘Art never hurt anybody” on the other hand words have been know to start revolutions. Chesterton’s words are the fuel for the Christian revolution that will lead us out of this Dark Age.

This is really great, Alan. Thank you very much. It has often seemed to me that Gilbert's artwork doesn't get the attention that his other output does, despite being similiarly varied and vast. Of course, his prose and poetry don't get enough attention either, so I guess that's just the way it goes.

Incidentally, with regard to sculpture, it is worth noting that Gilbert first met George Bernard Shaw in the studio of Auguste Rodin, where the latter was engaged in crafting a bust of the former. Said Rodin's secretary, of Shaw, to Shaw himself: "The Master says you have not much French, but you impose yourself."

Furor,
It is great to here Gilbert met Rodin. As I mentioned in my piece artists are family. Rodin had a student named Ivan Mestrovic, Mestrovic's student was Michael Skop, and I studied with Skop for 10 years. So in a way (I know it's a stretch) Gilbert met my Great Grandfather, artistically speaking.
Alan

Little has changed in the art world since Chesterton wrote about it. It is still groping, lurching in blindness, though there are now signs of genuine recovery. People have grown tired, maybe, of giving praise to ugliness.

The emperor has no clothes.

GKC's statement on Whistler and Picasso is worthy of framing in itself. He struck the nail squarely with that one.

Tim,
The signs of recovery I’ve seen are in a few small obscure studios, artist that are pursuing phenomenology, nothing in the main Galleries at all. Then again I have not traveled since my loss of steady income so you could be right.
What I have seen in the Galleries is somewhere in between Whistler and photorealism. True many are rediscovering what paint can do but it is all in the effect. Keep in mind that, aside from a few notable exceptions, Michelangelo cast a huge artistic shadow that we did emerge from until the early 1900’s. If you look at his latter sculptures – the slave series- they look as if the could have been completed during the Impressionistic period. He was truly someone who transcended his epoch. Then came Rodin, Picasso and Matisse, Bonnard, Degas, Cézanne to mention a few.
And they of course were reacting to photography as well as the fact that Church was no longer a major sponsor of the arts so image making changed.
Picasso cast a similar shadow as Michelangelo. Again this is not the space to demonstrate Picasso’ genius but he was the first to use time form and to project beyond the canvas. These philosophical methods need to be recaptured in images that are accessible creating catalysts to truth.