Just don't step on his tail

Hearing so much about the Chesterton conference made me sorry I missed it, especially not seeing The Surprise performed. Theatre you see is one of my passions. So here is a story about a play from one of Gilbert’s friends (sort of) that I was evolved with.

One of my paying gigs is that of theatre director/designer at my local community college (small pay-big fun so it balances out). When I first took the job there was only person on campus in charge of the performing arts and she told me I could do any play I wanted, as long as it was not R rated and that I was not to exceed the $500.00 dollar budget and it had to be one that would help build a repeat audience. She handed me a catalog of plays. By the time I got home I knew it had to be a comedy. I opened to that section of the catalog, at random, and at the top of the page was SCREWTAPE a play by James Forsyth based on C. S. Lewis “The Screwtape Letters”. My search was done.

Forsyth had managed to transform the decidedly one way dialog of the SCREWTAPE LETTERS in to a well fleshed out theatrical presentation. Instead of letters, Screwtape ‘came up’ with Wormwood to act as a personal coach. These guys are portrayed as a classic two person comedy act in the Laurel & Hardy mold. When Slumtrimpet enters they become more like the Marx Brothers. These three interact, unseen, by the “patients” providing two plays at the same time or rather being able to see the supernatural influence the natural all working to get Mike to ‘hell’s dinning table’.

Word of warning here: as one reviewer said "purest fans of C.S. Lewis' brilliant, witty "The Screwtape Letters" - 31 epistles of seductive advice from an avuncular old-timer to his naive relative - will likely be disappointed. James Forsyth's 1972 play departs from the original, failing to capture the subtleties of the Lewis satire, a masterpiece of reverse theology." (Aside from that Mrs. Lincoln, how did you like the play?) But hey, if it followed the book exactly the show would run over 15 hours. Remember it had to fit the dramatic format and it does that very well combining the satire and slap-stick of the original while not losing the point and providing the trials of the patient as something we can care about. Some of the English idioms had to be Americanized and Forsyth did make a few errors in theology at the end but that was easily fixed.

Warning number 2: The devil can not stand to be mocked and he started trying to stop this play shortly after it was cast. Several professors started that church/state nonsense. I had to speak to the Dean and simply asked him, “Would it be alright if I were to do “Joseph and his Amazing Technicolor Dream Coat or Godspell (yuck)? He said “Yes”, and I said “Then why are we talking?” “Good point” he said, (he was on my side anyway because he loves C. S. Lewis. He just needed a talking point).Things also started happening to my cast. The leading Lady bowed out after the first rehearsal saying that she was sorry but she had fought the devil before and lost and was not strong enough to do it again on purpose. I kissed her on the head and bid her farewell. She was replaced. Next, the cast started getting flat tires on the way to rehearsals, and there were two minor fender benders. I taught the cast St. Michael’s prayer (don’t tell the Dean) and that nonsense stopped. A week before we were to open a cast member quit. I replaced that one with a friend that I knew could memorize the part and pull it off in time. I have never gone through that many cast changes and “accidents” with any other play I have done.

It made me understand why Lewis did not write a sequel. Being that close to the devil is a sticky ugly place to be. The distance between the rehearsal hall and my home is exactly the time it takes to say one Rosary. I did that every night just to feel clean again. I taught two other actors that prayer as well.

For those of you that have been involved with theatre you might recall that sort of thing happens with another play all the time, Shakespeare’s tale of the Scottish King. Theatre people don’t even say the name especially backstage. It has the same effect as saying Voldemort, because the dark arts are in that play too.

All said and done, the play came off as a success. We tripled the previous attendance record. A local convent came – all seven of them and they gave us praise. They even liked pre-curtain song, Bob Dylan's Gotta Serve Somebody.

I have noticed that there are now several theatrical versions of Screwtape out there along with Forsyth’s and his show is getting mounted more now than when it first came out. Keep an eye peeled at the theatres in your area or suggest it to one of them. 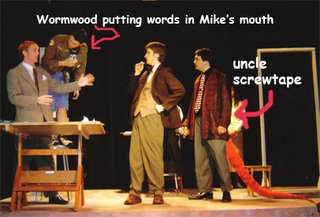 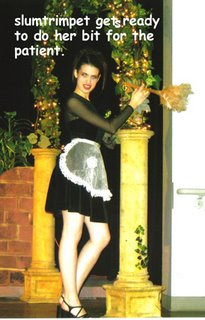 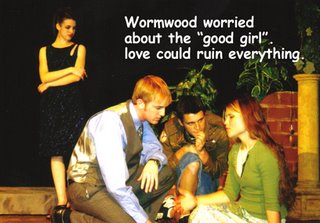 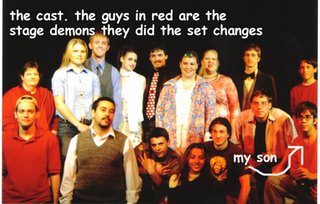 Chesterton told us “Nothing succeeds like failure” and Gerald Nachman tells us “Nothing fails like success.” In my case the latter is true. The other production I did last year was The Diviners by Jim Leonard. Not as successful as Screwtape but we hit another box office record. I began looking at the Chesterton plays for this year but that is now on hold. With those successes the performing arts department was taken over by the English Lit dept. a committee will pick the plays with no input from me, “Thank you very much”. A committee is a group of people who know nothing and get together to decide nothing can be done. But I'm not bitter.

Here is my number one pet peeve with English Literature programs: Play scripts are not literature. It’s like teaching about sculpture in a music class because if you hit a sculpture with a mallet it makes a sound. The only similarity between a book and a script is that they both have words on a page. They can not be read as literature. They can not be analyzed, critiqued, enjoyed nor appreciated as literature. A script was written to be preformed not read. A script is at best one third of a completed work - you need actors and a director to fully bring it to life. This is why so many kids hate Shakespeare; they are forced to read it in English class, and rarely, if ever, seeing a production.
A good piece of literature you reread and enjoy the visit but it will give no new surprises on the second reading for the characters are locked into your brain as you have painted them like visiting a very old and dear friend. A play on the other hand can be seen several different times by different troops, the words will remain the same, but nothing else will. Some of the versions you will not like others will astound you. I read a script six times before the first rehearsal in order to figure out how it will look and play out. And yet every time one of the actors will do a certain reading or bit of business I had not thought of and it will be perfect. Theatre is a collaborative art but not a democracy.

On those occasions I have allowed my scripts to be mounted by other directors I am always surprised at the interpretation (as I’m sure Forsyth would have been with mine) sometimes positive sometimes not. That is the beauty of the beast.

Speaking as someone who is writing a play at the moment, as well as reading a great deal of 'em too, I can say that I have enjoyed this post immensely.

My favourite play to date is Tom Stoppard's Arcadia, which I have been fortunate enough to read, study, and see performed by a wonderfully talented cast. It is perhaps single-handedly responsible for "turning me onto" drama as a form, whereas before I encountered Arcadia I barely cared about the genre at all.

So, thank you, Tom Stoppard.

Stoppard is one of my favorites too! The “what it's like to be dead” scene in Rosencrantz & Guildenstern Are Dead made me laugh so hard I it was difficult to breathe.
Good luck with your script.

One point - I'm not sure kids and teens would really gain interest in Shakespeare (not already being interested) merely by seeing a production of his plays. Honestly, most just don't care. I was part of a program (as a participant) which went up to Ashland to see several plays - most of the kids just slept through them.

Annon,
Granted. The problem with most Shakespeare productions is that many directors treat him as sacrosanct and present it as window to the past, “it’s historical ya know”. That’s when I snooze. Shakespeare almost died out in the early part of 20th century then came the director Peter Brook who gave us A Midsummer’s Night Dream on traipses, (http://www.amrep.org/articles/2_3a/enduring.html)
He pumped new life into the old standard because he knew that the story was just as true today as it was then so he had to hit that for new audience sensibilities. There was a great surge in Shakespeare’s productions for awhile until they just started getting silly, remember the Richard III scene in The Goodbye Girl? Now we are back to historical presentations where the words are more important than the meaning. Like the orchestras that only use instruments of the 1700s to play Mozart are not as well received because our ears are not accustomed to those sounds.

As for Shakespeare and young audience, I was involved with a local Shakespeare troup that did a children's version of The Tempest called Tempest in a Teapot. (I was Prospero!)

We shortened and simplified the play, but did not cut the basic plot.

Among the changes we made were adding a narrator to help explain things, and Ariel was played by three actresses at the same time(thus helping to creat the effect of a swirling spirit).

The kids loved it.

Furor - a fellow palywright? We just did my version of "Robin Hood" at my school. Last year we did my version of Stone Soup, and a variety show I wrote. One of my plays was read by of our local professional theater (as part of a regional playwright's festival).

The play I'm working on is about the making of Carl Dreyer's The Passion of Joan of Arc, and has certain mystical elements to it with which I am fairly pleased. I had intended to make it a "silent play," like the movie it's about, but the idea proved too difficult to carry out, at least for now. The idea is still in the back of my mind, anyway.

It's for a contest sponsored by the Samuel French publishing company, and the prize is a contract. I have to have it done and submitted by the end of August. We'll see how that goes.

I am not sure if you still use this blog, but if you do, could you please contact me at
centerstage077@yahoo.com? I recently directed a production of "Screwtape" and would like to discuss some issues that came up with it.
Thanks
Brittany

I am in a similar position to "Brittany" (above). I am planning to direct this play this spring, and I'm having some trouble locating the scripts I need. Are there two different versions of this play, both by James Forsyth? The preview on Googlebooks doesn't seem to match the one on my desk. Any help would be appreciated. Thanks.