The Battle For Joy

For those who have, by their own free will, decided to follow Christ and the fullness of truth know that they are promised three things, Courage, Joy and Suffering. The courage is needed to bear the suffering, the joy creates the courage, and suffering makes the joy all that sweeter. Courage without joy is rash action. Suffering without joy is empty pain. Above and under all is joy. “…but the greatest of these is love.” (1 Corinthians 13:13). You can not discover love with out joy in your heart and once in love, joy abounds all the more. It is easy to see that the words Grace and Joy are sometimes used interchangeably. This sense of joy and wonder is the main thing that hooked me on Chesterton’s writings. It is the joy that underpins his philosophy and theology. Joy is the stone upon which he has built his house. It is the joy in the courage that allowed Chesterton (or any one) to fight the wrongs, straighten out the crooked thought of others and to have the courage to share the joy. Joy simply can not be contained. Joy gives LIFE “A dead thing can go with the stream, but only a living thing can go against it.” (GKC) Love always leads to Life.

“What? Joy and Suffering together?” Many have decided that is to absurd to be real, “It just can’t be. I’ll take the pleasure sandwich but hold the suffering.” It is the main paradox of living a life that has both a horizontal and vertical element. Life is in balance only when both are embraced. It is as Chesterton put it ‘the balance of the Cross’. My Grandmother, a small word theologian, used to say, “It feels so good to feel so bad.” The big word theologians call it 'mortification' or ‘redemptive suffering’.

In talking about the beatification of Padre Pio, Andrea Monda said, (paraphrased), ‘It has been a paradoxical century, marked at once by a flight from and a yearning for sanctity - joy. Existentialist philosopher Camus seems to have sensed this paradox, if only partially, when he wrote: "The problem of the 20th century is how to live without grace... Is it possible to be a saint without God? That is the only real problem I recognize today." Camus was speaking in the context of the "war on sanctity" which, beginning with 18th century rationalism (the "Enlightenment") and continuing with the 19th century's positivism, set God and his action in the world ("grace") aside. The result? A thorough-going hedonistic relativism which gives fragile support indeed for acts of joy, moral courage, and brotherly love. In a world without God and grace, can there be saints? Or will sin triumph? That, Camus is saying, is the great question facing modernity. And the answer — Padre Pio, John Paul II, St. Francis, St. Thomas Aquinas, Lewis, Chesterton and even cranky Belloc are telling us — is NO, there cannot be saints without God just as “If there were no God, there would be no atheists”(GKC), for God is the source and inspiration of all holiness of all courage and joy. Chesterton’s writings (and the lives of the Saints), as it were, are a "sign of the times," a sign that there is another way, that the problem is not how to live well without God, but how to draw near to Him once again and remain faithful to Him to abide in his joy and He in yours.’

We are now and always engaged in a spiritual battle a battle based on that paradox of courage, joy and suffering. C.S. Lewis dealt in depth with this paradox in his book The Problem of Pain (interesting that this is the first of a series of popular works on Christian doctrine) The book starts on a personal note: "Not many years ago when I was an atheist … ". There follows a compelling picture of a universe filled with futility and chance, darkness and cold, misery and suffering; a spectacle of civilizations passing away, of human race scientifically condemned to a final doom and of a universe bound to die. Thus, "either there is no spirit behind the universe, or else a spirit indifferent to good and evil, or else an evil spirit". On the other hand, "if the universe is so bad, or even half so bad, how on earth did human beings ever come to attribute it to the activity of a wise and good Creator?” In The Problem of Pain, published in 1940, Lewis offered the reader this overly humble confession: "You would like to know how I behave when I am experiencing pain, not writing books about it. You need not guess for I will tell you; I am a great coward."

The Problem of Pain was followed twenty years later by A Grief Observed. “In A Grief Observed he satisfied, albeit inadvertently, the alleged curiosity of his readers. But he did not come across as a coward; nor did his firm grasp of "a theory of suffering" prove altogether irrelevant. True, his faith in God was challenged; he uttered blasphemies; he doubted God's existence; worst of all, he went through the very objections to God's goodness which he had refuted in The Problem of Pain: they all seemed valid to a disabled mind, under the sway of unbearable pain. But then, reason (joy) returned: "Why do I make room in my mind for such filth and nonsense? Do I hope that if feeling disguises itself as thought I shall feel less?"

In between these two books he wrote Surprised by Joy. Joy, as described by Lewis, is a sudden stab of intense consciousness, very different from mere pleasure. And there is something better than joy — as much better than joy as joy is better than pleasure: Christian faith. Joy comes to Lewis as often and as sharply since his conversion as before. "But I now know that the experience, considered as a state of my own mind, had never the kind of importance I once gave it. It was valuable only as a pointer to something other and outer." (emphasis added)

When feeling disguises itself as thought, all nonsense is possible. Nowhere is it truer than in the problem of pain. Yet, from the Christian perspective, anything that can reasonably be said about suffering is only a preamble to the Mystery of the Cross. Lewis's solution to "the problem of pain" prepares the intellect for a dive into the Mystery. The Mystery is Joy.

The Moslem god says, “Submit”. The Christian God says, “Decide”. The choice is between the blessing and the curse (Deuteronomy 11:26). The Curse leads to despair - The Blessing leads to Joy. When you submit to something/one you become a slave. A slave has neither courage nor joy. When you choose something/one you become a friend or a spouse. A friend or spouse will lay down their life with joy for the other. The Bible uses the phrase “Be not afraid” 365 times; John Paul the Great used that phrase to define his Pontificate exemplified in his last years where he showed us how to suffer. Courage, Joy and Suffering are things worth knowing. Chesterton knows these things. “And Chesterton knows that what he knows is indeed worth knowing. He knows God. …Chesterton is not afraid to cry out for justice, no matter what the cost. He hopes to reach an audience of the men who know too little.” (Lecture XXXIX, The Man Who Knew Too Much, By Dale Ahlquist)
We can read how this battle played out in the lives of Chesterton and Lewis. Both of these men began as disbelievers and then took the Truth train through that round trip between the Twin cites - Intellect and Heart. It is a trip they took continually and one they invite many to come along.
--------------------------------------------------- 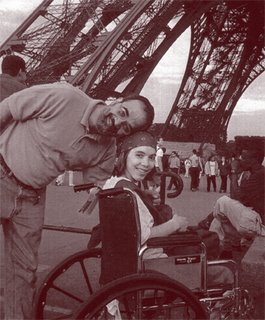 This little girl taught me about Courage, Joy and Suffering. Well actually, we taught each other - that's what family does.

In part two we will discuss this battle and how it played out with Ortega y Gasset as compared to Chesterton and between Hilaire Belloc and Franz Kafka.