Francis Still on the March

This past weekend I had the honor and privilege to accompany 43 teenagers to Franciscan University’s annual youth conference in Steubenville Ohio. (side note: Franciscan U is where I had a major conversion experience and where I first discovered Chesterton). We had three days of rocking Praise and Worship, fellowship with other young adults and the powerful times of Eucharistic adoration. OK maybe spending three days chaperoning 43 teenagers amongst 2,500 other teenagers is not your thing. That’s too bad. When they let their faith loose it is something to behold. The young Church is powerful beyond measure, but often lacks the necessary support to unleash this power. We as adults need to support and encourage that power and then step back and let them fly. The Saints, the Chesterton’s, the Lewis’s and the Belloc’s of this early millennium will come from these fired up youth. They are hungry for the truth; it is our job to give it to them.

This year’s theme was the UNCHANGING nature of God – His love for us, the truth as revealed through Scripture and Tradition, and the indelible mark He put on our souls through Baptism and Confirmation. UNCHANGING! It can rub us the wrong way. After all, we live in world where if something can’t be upgraded, if it can’t be modified, if it doesn’t adapt, it is seen as obsolete and outdated. Yet Hebrews 13:8 clearly states, “Jesus Christ is the same yesterday, today, and forever.” He is UNCHANGING! Thank God that He is the fixed point, the foundation, the beginning and the end.

We find God most unchanging in His love for us. The Catechism states in paragraph 221, “God's very being is love… God has revealed his innermost secret: God himself is an eternal exchange of love, Father, Son and Holy Spirit, and he has destined us to share in that exchange.” That’s a major “Wow!” statement. We were created to be a part of an everlasting and unchanging love relationship.

The access points for this eternal love are the Sacraments. “By the Eucharistic celebration we already unite ourselves with the heavenly liturgy and anticipate eternal life, when God will be all in all.” (CCC 1326) Through our participation in the Eucharist, we experience a foreshadowing of the joy that will be ours forever. This is true of all the Sacraments! Once again, “Wow!”

Eric posted (below) a quote of Chesterton’s from St. Francis that reminded me of this weekend and apropos of coming from Franciscan University, “The servants of God who had been a besieged garrison became a marching army; the ways of the world were filled as with thunder with the trampling of their feet and far ahead of that ever swelling host went a man singing; as simply he had sung that morning in the winter woods, where he walked alone.” Francis is still sending out the armies from places like Steubenville and he is still singing.

The weekend was truly Orthodox from its speakers to the daily Mass, to Eucharist adoration and as Chesterton tells us, “There never was anything so perilous or so exciting as orthodoxy.” And, “The Orthodox Church never took the tame course or accepted the conventions; the Orthodox Church was never respectable. It would have been easier to have accepted the earthly power of the Arians. It would have been easy, in the Calvinistic seventeenth century, to fall into the bottomless pit of predestination. It is easy to be a madman: it is easy to be a heretic. It is always easy to let the age have its head; the difficult thing is to keep one's own. It is always easy to be a modernist; as it is easy to be a snob. To have fallen into any of those open traps of error and exaggeration which fashion after fashion and sect after sect set along the historic path of Christendom--that would indeed have been simple. It is always simple to fall; there are an infinity of angles at which one falls, only one at which one stands. To have fallen into any one of the fads from Gnosticism to Christian Science would indeed have been obvious and tame. But to have avoided them all has been one whirling adventure; and in my vision the heavenly chariot flies thundering through the ages, the dull heresies sprawling and prostrate, the wild truth reeling but erect.”

These kids left reeling but erect. Please keep them in your prayers. 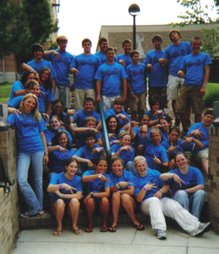