In my post of June 27 (just don't step on his tail) I mentioned that I will be directing a play for my local Community College. Realizing that imposing a script on me would not bring the best results they asked me to submit some suggestions. First on my list was Chesterton’s one act The Surprise. To round off the evening I suggested pairing it with John Paul Sartre’s No Exit.
You know, a battle for Joy done on stage sort of thing.

They accepted No Exit but nixed The Surprise; they felt we had done enough Christian theme plays. I asked if they read it but they had not they just Googled Chesterton and saw that he was a Catholic apologist. And they wanted a show that was more in line with the offering of their English department’s list of reading so the students would go and see it (read: forced to go and then write a paper).

I first let them know that, true The Surprise has a Friar in it, but that it was not an apologetics piece. It is more like an adult version of Pinocchio. And that Chesterton is on the reading list of the Universities in the area so thier students might come and that would bring recognition to this institution. As well as the fact that both plays have to do with the issue of free will so their students would have plenty on which to write a paper. After some hemming and hawing I reminded them that they wanted shows that appealed to their audience base and build upon it. By the size and make up of our recent audiences that base was not the student body but the Screwtape crowd. And with Sartre on the same night we will bring a whole different sort of crowd. There are a lot of people who still think Sartre’s existentialist thinking is correct.

They agreed and are letting me do The Surprise along with No Exit.

So I may have put my foot in it again cause now I gotsta prove my stand to a group that would be happy with my bombing. But as Gilbert was so fond of saying "I believe in getting into hot water; it keeps you clean."

This should be fun.

Here are some photos Dale Ahlquist sent me from his production of The Surprise done at the 25th GK Chesterton Conference. (I'm doing so without anyones permission - in for a penny in for a pound) 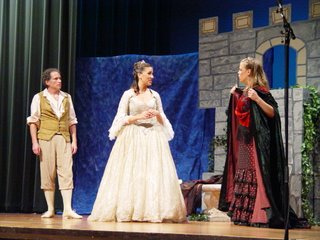 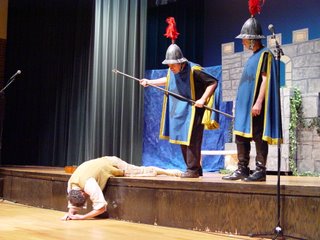 I’ll keep you updated as to how it all goes and I’ll post my photos after the show in November.
Posted by Alan at 11:24 PM

this blog is absolutely amazing!!! i really liked, i think all the information contained in this blog are very useful and very interesting. i really enjoyed reading. i am very curious for everything, usually i want to know new things. this is the reason why i like to know