I spent the past week helping a family member rehab their house, it was hot, sticky, and a lot of laughs. I like doing destruction/construction work. You can see the work, it’s tangible. God has a special place in his heart for those who build stuff from Moses building a nation, to asking Francis to rebuild His Church. And let’s not forget He did not choose a segment market analyst to be Mary’s husband. That’s why I feel closer to Jesus whenever I have a hammer in my hand.

One of the up sides of this project was getting some alone time at night where I could read. I was able to read C.S. Lewis’s The Great Divorce. Several stories on the battle for Joy were played out. Where in Screwtape Lewis gave us the strategy and tactics of the demonic in this book we see the Angelic approach battling to undo the spiritually devastating affects of a Screwtape victory. "There is always something they prefer to joy - that is, to reality" The book definitely has a Kafkaesque quality to it as well.

One story dealt with an artist. Where the artist was first enthralled with a glimpse of heaven as he looked at the light playing on a field and he was moved to capture that feeling and tell others about it through his work. This work brought him fame. Then the work became not about light but about paint then it became about him and what was said about him and his movement. Similar to the Robert Ryman piece Furor talked about.

Another book worthy of note if you want to understand the morass the art world is in today is The Painted Word by Tom Wolfe. Lewis with his artist character captures, thirty years prior, to what Tom Wolfe expounds upon.

It would be easy to outline the battle for joy in the art world because there are so many characters that went the other way. They are the stuff of pulp fiction, we all know them, the critic’s love them, and they are the bohemian heroes and role models. They are the lustful predators, the drunks, the decadent, the insane, the deviants, and the suicides.

As I mentioned in my last post, when an artist does not fit within that outline, the historians and art critics haven’t a clue how to deal with him and usually try to deconstruct his life to somehow shoehorn him into what they think an artist should be. For them it has to be someone who does more than just create beautiful things. They must stand for something or more importantly stand against something.

It’s not his work they have a problem with (ok some do) but his life. And some say he doesn’t even look like and artist, “He was a pinched, unsmiling man who looked like a stereotypical accountant”, (Peter Schjeldahl art critic for the Village Voice). What they miss is he was deeply, passionately, faithfully in love with Marthe, his wife and she with him.

Historians refer to her as a shrew or at best a nag. They got it wrong - mostly. Hey, no one’s perfect. She was known to lie about her age. Marthe was savagely protecting their relationship. They called her a shrew because she would not allow her husband to hang out with the Moulin Rouge gang, she took care of the money (Bonnard was useless there) she would be his only model (what sane women wants another naked woman around the house), and she eventually got them to move out of Paris and away from it’s bad influences.

Also a shrew is not likely to pose nude when everyone would she those paintings. And living with a shrew-nag would eventually deflate the spirit of any man to the point his work would become less and less where as Bonnard’s work continued to get better, more vibrant and more alive.

The thing that confounds critics the most is although Bonnard painted Marthe (at least 384 times) well into her early 70’s she is always seen as a girl in her twenties. I’ve read “amazingly she never aged”, and “interestingly she always appears as a young girl”.

Obviously from people who do not know Love. He simply always saw her as the girl he first fell in love with. His work was to capture that moment, that glimpse of Heaven and tell us about it. 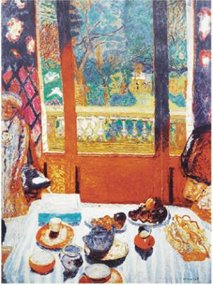 Very nice story. My wife (who is the artist in the family) will appreciate also.