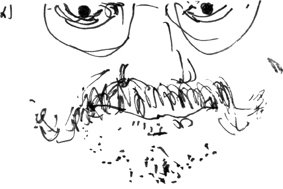 The first thing he does as he enters his studio is light a cigar. The quick snap of the match ignites his first thoughts; the light of its flame fills an intimate space. Its heat rises to his face as the energy lands at the tip of his cigar. Inhaling and exhaling, he creates a mini blast furnace softening the day’s mettle. Blue-white smoke engulfs his head and swirls around him like a lazy tornado. A flick of the wrist and the match is gone, its job done its former usefulness not even worth a memory.

With the dark, burning weed held firmly between his teeth, he opens the bourbon and pours three seconds worth into a rarely-washed coffee mug. Removing the cigar he stares into the cup, its smell dances with that of varnish, turpentine, linseed oil and they merge together. He flares his nostrils to accept them all. The cup now to his lips he takes it all, letting it rest for a moment in his mouth to burn away any lingering sentimentality. He closes his eyes and swallows. He mates with his cigar again and inhales a handful of cheap gaseous tar and says, 'Ahhh.' He screws up the bottle, puts it away. "Let there be light,” he says, as he slams on his two 500-watt bulbs.

This ritual complete, he turns as someone called and faces the canvas. He walks up to it, touches it, straightens it, and steps back. The first hints of the new work are already in place. He has reduced its height and breadth down to a postage stamp in his mind. No longer intimidated by size, he adds a few quick lines to its surface, fulfilling a form abstracted within him. He sees lightning, and hands held in a dance, glaze of paint upon glaze of paint soon to be fired-rock hard into something dimensional. This is his favorite part; he is no longer concerned with thoughts of "Can I do this?" It is easy. Anybody can do it. There is no magic. Like Bartimaeus, he cannot hold himself back from shouting. A narrow gate is before him. He walks through it and connects with the universal. He is. The smell of the place disappears.

The cigar is in the way, no longer needed to dissolve the outside world; he puts it down.

New pigments squeezed on to his large glass palette, he cleaves them together to become something new. Not two but one. Not color but blood, bone, anguish, joy. With every touch of the canvas he and it changes 100%. His arm is an umbilical cord from his mind, his truth, to pump life into a being self-conceived. His brush a hammer, smashing the imaginary boundary between space and volume till there is no difference between the two. It is here that he lacks a sense of linear time, a minute and hour they are the same. Past and the potential of a future are nestled in the envelope of the present. He stops only when the paint becomes color again or when he begins to force his image into 'I want' instead of 'I need', when he takes and doesn’t give. The relationship broken by the snake selflessness, he backs away and re-lights his cigar. The silence becomes deafening, and the separation frightening, yet he is only mildly upset at the break of the spiritual. In a confidence born from having stumbled a thousand times before, he steps forward again. He listens, letting the painting speak to him, telling him what is next, what is needed. Then he lets go of himself and he is once more part of the intimacy. The silence is replaced by his internal symphony. His imagination becomes tangible.

The cogs have fallen in place. Nothing has been by chance. The terrain was well studied. All the various paths were worked out, mapped. He knew what to take with him on the journey. He knows what his goal is, and how to get to the top of the mountain. Nothing extra, nothing forgotten, no doubts. He will dwell in the tent of light. His touch is the consummation of thought, not its process.

With each pass of the brush he is closer to himself, to what he is supposed to be. The piece becomes like a window, and he paints the world beyond the glass, projecting beyond its boundaries to grasp himself within its mystery. The image moves and shifts as he himself moves and shifts. He becomes fixed to it, nailed to it, for a time. His arms and back ache. He could escape the work he has undertaken, but chooses to remain with it. It is his. He will not abandon what was given to him. The work will return to what it was, a catalyst, as he continues forward through the on going conversion of heart.

The last touches of alchemy are applied as he walks back and forth in front of it, tying it together as one; making it move as the viewer moves - strong from every angle. Life like a flower struggles to be alive in its composition.

Although the clock recorded a few hours it took years to complete. It would live, but never age. It is a long time there and yet, it is right in front of you. It changes nothing as a sentient being would, it just allows the viewer to open his own doors and move the stone from his own screen of logic. “Forget the past, the things of long ago remember not. See I am something new”.

The cord cut, the separation complete, he wipes the brush on to his jeans and dips it into its solvent bath. He reaches for his cigar, now just a stub. He sucks the last of it away. Then there is a remembrance of gravity. He stares at his creation and says to himself: 'Did I do that?' Putting the lights to rest he walks away praising the One who guides. 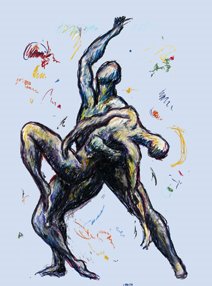