Chesterton calls Jerusalem, "the shoulder of the world," a place that demonstrates the truth of "the hardest of all the hard sayings of supernaturalism: that there is such a thing as holy and unholy ground." Because three different religions see it as holy ground, Jerusalem remains to this day a place of great conflict. However, if you follow that conflict in the news, you might get the impression that the conflict is merely political, or viciously racial. The news analysis never seems to mention the hard saying about holy ground and admit that there are religious questions at the heart of the conflict. Moreover, the news seems to leave out one of the religions: Christianity, the religion that founded western civilization, the religion that thought Jerusalem so important that thousands of people from kings to peasants died to protect that place though it was not their home, and spent hundreds of years trying to conquer and keep that town, and that when it lost that town, the thing known as Christendom began its long decline. That religion believed something that the other two did not: that the holiest spot in Jerusalem and in all the world was an empty grave. (Lecture XXXV The New Jerusalem By Dale Ahlquist)
-----------------------------------------
"In many respects, the radical Islamic response to modernity is like the Hieronymus Bosch painting The Garden of Earthly Delights, which depicts a hell of obscurity and insanity, a world without reason or hope. Either the world submits to Islam or the world is turned into the hell of destruction. In radical Islam, religion is “flesh and blood,” and unless one submits, death is the only recourse,..." Herbert London 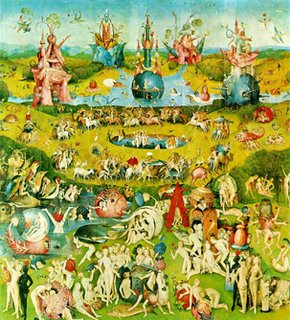 "IT IS THE test of a good religion whether you can joke about it." ~ G.K. Chesterton

Ned Lamont wants to sit down with Hezbollah and Israel and say, “Come on boys let’s be Christian about this.”

Advocates of 'proportion' are just unbalanced
"Disproportion" is the concept of the moment. Do you know how to play? Let's say 150 missiles are lobbed at northern Israel from the Lebanese village of Qana and the Israelis respond with missiles of their own that kill 28 people. Whoa, man, that's way "disproportionate."
But let's say you're a northwestern American municipality -- Seattle, for example -- and you haven't lobbed missiles at anybody, but a Muslim male shows up anyway and shoots six Jewish women, one of whom tries to flee up the stairs, but he spots her, leans over the railing, fires again and kills her. He describes himself as "an American Muslim angry at Israel" and tells 911 dispatchers: ''These are Jews. I want these Jews to get out. I'm tired of getting pushed around, and our people getting pushed around by the situation in the Middle East.'' Well, that's apparently entirely "proportionate," so "proportionate" that the event is barely reported in the American media, or (if it is) it's portrayed as some kind of random convenience-store drive-by shooting...On the other hand, when a drunk movie star gets pulled over and starts unburdening himself of various theories about "f---ing Jews," hold the front page!

Until I read the caption I thought “End of Line” was a political and/or religious statement. It just felt very Chesterton to me. I mean wasn't it when Gilbert came to the end of the line in his dead-end secular thinking that he knew conversion was the only way and Catholicism the only answer?
This photo was taken by Elaine Thompson who also took the photo used for the news story about the “proportionate event” mentioned in Steyn’s op-ed piece.

It's always a tough day for the tavelers on this earthly pilgragim, but as St. Catherine of Siena said: "Nothing great is ever achieved without much enduring."
Posted by Alan at 8:05 PM