When one is a child of a Great parent (and I mean Great as in famous and/or deed) it is very difficult to get out from under that shadow and become your own person. Aside from a few notable exceptions (the Wyeth’s, the Boyd’s and the Barrymore's) these children deal with an imagined imposed inferiority complex that usually leads to destructive behavior. There are famous cases of this, as with Brando’s kids, and others that become tabloid fodder. I’m sure psychologists have a syndrome name for this. Now multiply that syndrome by a several million.

My Father’s generation, that WW2 crowd, is called the Greatest Generation followed by the Baby Boomers, of which I belong to the tail end. Baby Boomers!?, talk about being in the shadows, it’s the first generation that did not earn its name but came to embody it, as in Baby. The battle cry was “Don’t trust anyone over thirty!” We have tried to stay perpetual teenagers, action without consequence, little responsibilities, invisible and invulnerable. And then came the one we spawned, it is even worse, Generation X -no name at all - and their battle cry is “I want my MTV.” (see Joe’s post A Softened State is the Infantilization of the Population)

"In China, the birth ratio of boys to girls is now 12% above normal levels,"… "In India, it is 6%. . . . The demographic implications of all this are immense because of the size of populations involved. The first results will be felt around 2015, when huge numbers of men reaching marriageable age will be unable to find a wife. The imbalance in the Chinese marriage market will worsen after 2010, and by 2030 there will be a 20% surplus of men--every year 1.6 million will be unable to find wives."

Historically, large numbers of unmarried men in a society has meant destabilization and war. With so many potent powder kegs in Asia—Taiwan and Kashmir are just the best-known--are massive wars in the continent's near future?” (Joseph A. D'Agostino)

Or, “The extinguishing of a people does not have to be done with troops or death camps. Isn't it genocide to indoctrinate into the contraceptive mentality the youth of a small nation with a low birthrate? (Kinder, Gentler Genocide in Mongolia)”

A popular song for the Greatest Generation was Don’t Sit Under The Apple Tree With Anyone Else But Me for the Baby Boomers it was If Your Not With The One You Love, Love The One You’re With, Gen Xers it is Let’s Do It Like They Do On The Discovery Channel. All this abandon is leading us away from Adam and Eve to Adam and Steve to Adam, Eve, Lori, Joan and Shaniqua. The kind of progression that Chesterton means when he talks about the myth of progress.

Stanley Kurtz tells us, “Democratic culture depends on monogamous marriage (one man one woman). The alternatives are either too authoritarian to be adapted to our society or so hyper-individualist that they cannot perform the work of families. And recognition of either alternative would undermine the monogamy on which the stability of American marriage depends.
The new wave of Big Love-inspired talk about polygamy is directly attributable to the campaign for same-sex marriage. Big Love was created by a pair of gay-marriage advocates, who use the show to highlight the analogy between same-sex unions and polygamy. And Big Love is merely a hint of things to come. Radicals have long seen same-sex marriage as a lever with which to break the grip of monogamy. Should gay marriage be safely legalized, the radicals will emerge in force. Mainstream liberals like Sanford Levinson (who has a soft spot for experiments in multipartner marriage) openly advise the gay marriage movement to distance itself from marriage radicalism until after gay marriage is legalized. Big Love notwithstanding, that advice is largely heeded. (Read all of Stanley Kurtz’s essay here. It will be well worth your time.)

We are headed for a time when certain Gospel passages will be labeled “Hate Speech” and preachers will be required to use inclusive language. Yes, if you mention Jesus in a sermon and someone in the church doesn’t particularly like to be reminded of that name or is offended by it because Gumby is their spiritual guide you could lose your job. Because we know Jesus never offended anybody. As the Roman solider nailed Him to the cross he said, “It’s nothing personal, just business.” This all inclusive approach is now being tested out in the U.S. Navy.

Yes our God is a patient God but history tells that sooner or later enough is enough and he chastises his children.
“The LORD is slow to anger and abundant in loving kindness, forgiving iniquity and transgression; but He will by no means clear the guilty, visiting the iniquity of the fathers on the children to the third and the fourth generations.”
Humpty Dumpty will have a great fall on this slippery slope. Our secular kings men and horses first said, “what harm could come”. But then they will say, “if only I had known.” But The Kings men and women will rise up and rebuild. 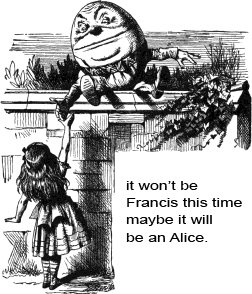 Good essay - although I don't see how increasing gender-based abortion of females (bad though it may be) relates to any generational qualities in the (primarily, I think) American populations you talk about elsewhere.

Although America is what I know best, the Baby Boomers are a world wide group. No other generation has had such a massive disregard for life or rather such a massive selfish regard for it. The abortion business and mindset is a business USA exported. The social upheaval in Southeast Asia with the gender imbalance will affect us like a brick cutting hammer. How will the Baby’s and Xers deal with it was the question I was trying to allude to. I do not think we will do very well. Sorry for the vagueness, I should not write so soon after reading those kinds of reports.
I should have mentioned my hope in this new crop of kids coming up who are showing a dynamic orthodoxy that is thrilling to watch develop.