we are in it deep now

And now even among the cries of those rational peace loving Muslim bomb throwers the Pope should not apologize for speaking the truth – ever. The Vatican is not the day spa massage office of God. It is the base camp for the Church Militant. Yesterday the Pope did apologize for the response to his remarks but not the truth of it. In the Pope's first public address since his trip to Bavaria, he said, "I am deeply sorry for the reactions in some countries to a few passages of my address at the University of Regensburg, which were considered offensive to the sensibility of Muslims."

Enraged Muslims Missed the Pope's Point Entirely
If he was mistaken as many Muslim believe the “moderate” Salih Kapusuz, deputy leader of Turkish Prime Minister Recep Tayyip Erdogan's Islamic-rooted party, said, "He is going down in history in the same category as leaders such as Hitler and Mussolini." If what he said was wrong then (from an obscure medieval text) or a more modern source (Belloc) the Muslim world should send in a phalanx of apologists to explain what their position really is, but then again how they dealt with the Danish cartoons is much quicker and more effective. And in that approach Al Qaeda Declares War on "Worshippers of the Cross". 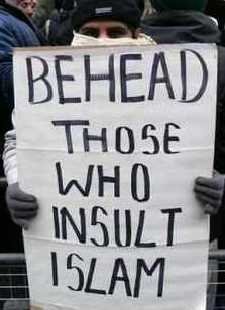