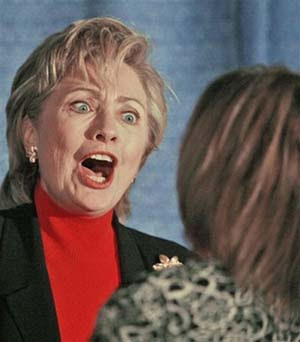 An interesting thing happened at work the other night that might explain Hillary’s “surprise” fall for inevitability. I say interesting because I was surely not expecting the comments I heard. It was a great example of the cheat the prophet game.

As a reminder my primary source of income is as a third shift factory worker in Ohio. The gender mix on my shift is 75% female of which 80% is over 35. They are fork lift driving, power tool using, tough, independent working woman. This is Hillary country or should be.

March 4th is our primary so election talk is now running through the lunch room along with domestic issues. The guy I was sitting with said he was going to vote for Hillary and before I could talk about the expensive and dangerous socialist policies Hillary is purposing, the woman next to him said, “What are you nuts! You don’t really want a menopausal woman as president. Do you?”
Another woman chimed in, “Yea, she’s all dried up.”
Another, “Even if she is not in menopause you can’t have someone PMSing with access to nuclear weapons.”
Another, “She can’t even keep her own house in line.”
This went on for little while till a 20 something female said, “Hillary, she’s a democrat right?”
Like I said, I was surprised and I think Hillary will also be surprised here in Ohio
Posted by Alan Capasso at 4:13 PM