Physics Can Be Phun 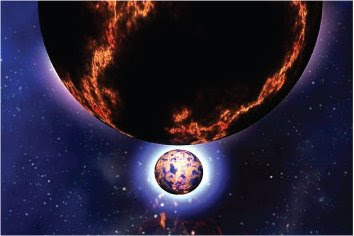 "The obvious truth is that the moment any matter has passed through the human mind it is finally and for ever spoilt for all purposes of science. It has become a thing incurably mysterious and infinite; this mortal has put on immortality. Even what we call our material desires are spiritual, because they are human. Science can analyse a pork-chop, and say how much of it is phosphorus and how much is protein; but science cannot analyse any man's wish for a pork-chop, and say how much of it is hunger, how much custom, how much nervous fancy, how much a haunting love of the beautiful. The man's desire for the pork-chop remains literally as mystical and ethereal as his desire for heaven. All attempts, therefore, at a science of any human things, at a science of history, a science of folk-lore, a science of sociology, are by their nature not merely hopeless, but crazy. You can no more be certain in economic history that a man's desire for money was merely a desire for money than you can be certain in hagiology that a saint's desire for God was merely a desire for God. And this kind of vagueness in the primary phenomena of the study is an absolutely final blow to anything in the nature of a science. Men can construct a science with very few instruments, or with very plain instruments; but no one on earth could construct a science with unreliable instruments. A man might work out the whole of mathematics with a handful of pebbles, but not with a handful of clay which was always falling apart into new fragments, and falling together into new combinations. A man might measure heaven and earth with a reed, but not with a growing reed. " GKC
I do not know for sure if the The Institute for Advanced Physics intended to follow Chesterton’s thoughts on the nature of science, that is basically, one can not separate the physical from the metaphysical and remain sane but they understand it.

Too many scientists believe we live in a Godless accidently made universe where everything is knowable and they always get twisted up in their shorts and many people along with them.

Now along comes a breath of fresh air and sanity - this is the mission statement of the IAP:
The Institute for Advanced Physics is established to advance modern science in a balanced fashion that does not leave behind the correct philosophical foundations, nor the proper moral and spiritual components.

They go on with this:

Anywhere physical science is done, one finds a ready defense of certain basic truths. Scientists hold that the world is rational and understandable by us. Science is one of the few arenas in modern culture where objectivity is respected. As Nietzsche, albeit from a hostile perspective, pointed out, those who study the world and hold to the reality of objective understanding witness to the God of Truth.

Still, scientists have inadvertently allowed the poison of subjectivism to enter through various port holes. Leading scientists hold, for example, using facts of quantum mechanics, that the world is not there when you're not looking at it. Of course, this entails a kind of split thinking, for while they're actually doing their science, they obviously think that they are learning something about a real world whose existence is not merely an aspect of themselves. The root causes of such a schizophrenic state must be addressed or science itself will be undermined by its unintended subjectivist fruit.
See the complete mission statement here
For you home schoolers you can get their text books here
In case you have forgotten: get your daily fix of wonder here
Posted by Alan Capasso at 4:40 PM

Trig, in principle and astro-applications