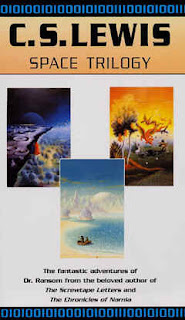 Have a great weekend.
Posted by Kyro at 5:32 PM

Love the Space Trilogy. A friend told me that they are a myth of the past (creation), one of the present and one of the future. So of course I had to re-read them (third or fourth time) to see what he meant. I think it is an apt description. And by the time you pull together the past, present and future, it is a pretty well all encompassing trillogy!

Agreed. It is a triumph.

I haven't read the Space Trilogy. I've read just about all of Lewis' apologetic work, plus "Surprised by Joy", Narnia and other things. "Till We Have Faces" is a favorite, also.

Lewis was the gateway to my eventual discovery of Chesterton and is in large part responsible for the direction of my spiritual life toward orthodoxy and then Catholicism.

I keep hearing the Perelandra books are great, but just haven't picked them up yet.

I've started reading the books I'm about half way through with Perelandra. I think the books are great and I agree that so far they "breath Christian Oxygen". Very nicely put.

whoa - if you haven't read this yet, leave all the modern day science fiction and/or modern day Christian fiction crap on the shelves and try something of actual quality for once

These three books still amaze me.