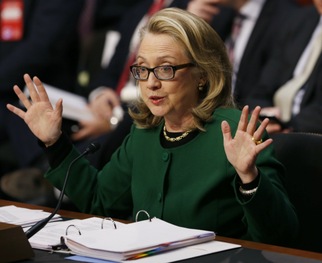 “Men are ruled, at this minute by the clock, by liars who refuse them news, and by fools who cannot govern.” - GKC

I have been thinking about this week's Benghazi testimony. People died. Requests for help were not honored.

Meanwhile, Obama administration officials testified and gave speeches that were false. It's going to be hard to prove that people deliberately lied, but it's clear that the "truth" was shaped by the administration to suit its political ends.

Will anyone face charges? I seriously doubt it.

Will someone lose his or her job? Maybe - though some folks who have already left their jobs may serve as handy scapegoats.

Will political futures be affected? Perhaps. I think the odds of Hillary Clinton running for President in 2016 just grew longer. Of course, the average American voters - people of severely shallow thought and limited memory - may not even recall hearing about Benghazi by the time the 2016 primaries roll around. Heck, many will likely have forgotten whatchamacallit by the All Star break.

I'm not a supporter of the death penalty, but I'm tempted to think Chesterton may have had it right: “It is terrible to contemplate how few politicians are hanged. ”
Posted by A Secular Franciscan at 8:08 PM