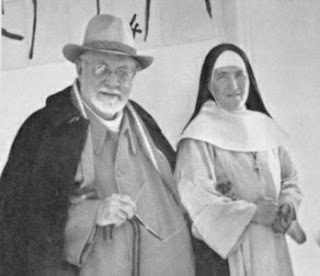 I saw a very delightfuldocumentary, "A Model for Matisse: The Story of the Vence Chapel"the other night and recommended it to any one you likes art, nuns, monks, architecture, intrigue and agape love.
(now on Netflix)

Yes, I am a big fan of Matisse and have always loved the Chapelle du Rosaire. If I believed in a bucket list visiting that chapel would be high on that list.

As an artist, that work is a true inspiration to me being that Matisse began that work when he was 77 (it is his master piece) showing that is never too late and great work does not always happen in the fire of youth.

I knew of  Sister Jacques-Marie as an art history footnote until seeing this film. Simply put without her this Chapel would never have happened and her continued input was not a small one.

Of course she plays down her role in true humility. She is a beautiful soul.
I loved her quote "I was sickly and I decided that if I am only going to live half a life I will live it to the fullest." For her living it to the fullest was to become a nun.

I left the film with a new appreciation of how God works in the lives of people to bring about the new kingdom and to build up the body of Christ. I think that through Sister Jacques-Marie Matisse died a good death. Sister also shows us what humility looks like.

In her obituary it ends with "When Sister Jacques Marie's role in the creation of one of the most important works of art in the 20th century was revealed by Barbara Freed in this documentary, A Model for Matisse: The Story of the Vence Chapel (2003), there were mischievous suggestions in the press that her relations with the artist had been more than merely platonic. "I never really noticed whether he was in love with me," she told an interviewer in 1992. "I was a little like his granddaughter or his muse, but he was always a perfect gentleman.""

Why I include that note is that a movie is now in the works, staring Al Pacino about Matisse and his relationship with  Monique Bourgeois (Sister Jacques-Marie). Maybe it's me but Hollywood does not do facts well and not since The Bells of Saint Mary's they certainly don't do agape love. I think they will go with the rumor and not the facts which will certainly be a shame. 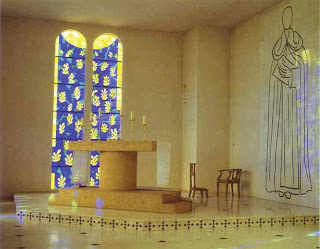