We'll start this one off with an aesthetic, philosophical and plainly historical atrocity! The act is barbarous in countless ways, and the crudely anonymous nature of it destroys whatever message it may have been intended to convey. Words can not express my displeasure at this act, and I find myself turning to Gilbert for a description of a similar situation. From the Autiobiography: 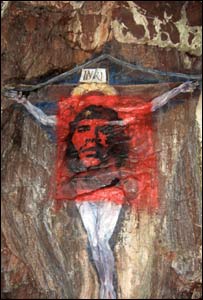 One other memory I will add here. I made the acquaintance of a young Count whose huge and costly palace of a country house, upon the old model (for he had quite different notions himself), had been burned and wrecked and left in ruins by the retreat of the Red Army after the Battle of Warsaw. Looking at such a mountain of shattered marbles and black and blasted tapestries, one of our party said, "It must be a terrible thing for you to see your old family home destroyed like this." But the young man, who was very young in all his gestures, shrugged his shoulders and laughed, at the same time looking a little sad. "Oh, I do not blame them for that," he said. "I have been a soldier myself, and in the same campaign; and I know the temptations. I know what a fellow feels, dropping with fatigue and freezing with cold, when he asks himself what some other fellow's armchairs and curtains can matter, if he can only have fuel for the night. On the one side or the other, we were all soldiers; and it is a hard and horrible life. I don't resent at all what they did here. There is only one thing that I really resent. I will show it to you."

And he led us out into a long avenue lined with poplars; and at the end of it was a statue of the Blessed Virgin; with the head and the hands shot off. But the hands had been lifted; and it is a strange thing that the very mutilation seemed to give more meaning to the attitude of intercession; asking mercy for the merciless race of men.

The race needs that mercy, and a certain member of it perhaps more than others. Wors still, it's a sad state of affairs indeed when one can find one's self unconsciously thanking God that at least the culprit cared enough about Christ to deface His image.

Here's another dose of infamy from the British Isles, wherein the blessed state has made great progress in refuting the conviction of Dr. Bull in The Man Who Was Thursday that the common man could be relied upon to tell right from wrong, whatever the upper crust might think. It is now the state education system's goal to eliminate the concept of "right and wrong" from the national consciousness altogether, and where better to start than the nation's children? Community? To hell with it. National identity? It's an outmoded and patriarchal concept. Simply being able to relate to people? It's too gauche to be modern. No, we have to encourage children to "develop secure values and beliefs," as if their feelings and opinions are the arbiters of reality. Even more appallingly, if such a superlative is possible:

The draft also purges [from the curriculum] references to promoting leadership skills and deletes the requirement to teach children about Britain’s cultural heritage.

The existing aims state that the curriculum should develop children’s “ability to relate to others and work for the common good”. The proposed changes would remove all references to “the common good”.

Gilbert must be spinning in his prodigious grave. In fact, if you'll indulge me, so great is his violent, lathe-like spinning that the imbalance created thereby threatens to disrupt the Earth's rotation upon its delicate axis and catapult us, screaming, into the Sun. Thanks, education committee!

That's all I have the energy for at the moment, I'm afraid. I'll close by simply directing you to a good analysis of the Ratzinger-authored Dominus Iesus, about which too little has been said.
Posted by Nick Milne at 12:07 AM