In what may very well be the best article of the month, rising star H.W. Crocker III lays down the law in a pithy and engaging manner, pulling no punches on topics concerning, Islam, Medievalism, and Reform. This piece pleased me greatly, and I think it's likely to please you too.

Does Islam need a Reformation? Not unless you think it would benefit from additional dollops of Puritanism; further encouragement to smash altars, stained glass, and other forms of “idolatry”; prodding to ban riotous celebrations like Christmas and Easter; and support for fundamentalist Islamic schools that insist on sola Korana and sola Sunnah . Indeed, it would seem that Islam has already had its reformers.

A colleague of mine has an extended look at the differences between man and woman. As well as being Catholic, she has a background in English and the family/educational sciences, so there is certainly much here for one to mull over. The linked post is just the introduction; she has produced several installments since. Give it a shot, people!

With the characteristic cool rationalism and objectivity of the truly dedicated scientist, a professor of psychology at the University of Washington has offered up a plea for the splicing together of human and chimpanzee DNA simply on the grounds that it would bother Christians. Prof. David P. Barash lays it out for us in one of the most elaborately fraudulent, belief-beggaring passages I have ever encountered:

In these dark days of know-nothing anti-evolutionism, with religious fundamentalists occupying the White House, controlling Congress and attempting to distort the teaching of science in our schools, a powerful dose of biological reality would be healthy indeed.

Words can not express the eye rolling that should meet this statement.

There is evil in this world, but it's all okay so long as you can use it to take potshots at President Bush. The contents of this link may make your blood boil as it is, but if you are yourself a mother or (somehow) a young child, it could be held up as legitimate provocation for all manner of blood-soak'd acts.

The higher they ride, the more sweepingly and alarmingly they fall. As Abraham Lincoln once said, 'tis better to remain silent and be thought a mean drunk, and an anti-Semite to boot, than to open one's mouth and remove all doubt. It is of course my hope that the whole affair is either a misunderstanding (albeit an intensely explicit and unlikely one) or a case of slander, but somehow it doesn't seem like it's going to end so sunnily. For shame.

A potent dichotomy. Gilbert couldn't have put it better in prose: 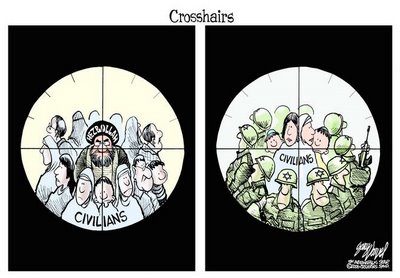 This war will end, one way or another, and nobody involved is simply going to be going back to the way things were. That's about as hopeful a thing as can be said at this moment.

The purpose of the Sacrament of Reconciliation is to acknowledge our sins, express sincere sorrow, and promise to amend our lives.

I suspect that Mr Gibson will be visiting a priest, soon.

I just wanted to thank you for this plug for my writing over on the blog.

I know it was written ages ago, but I was scanning technorati and found it. I hope to get back to this sort of blogging soon!

Visit www.btselem.org It is an Israeli human rights website that will give you accurate statistics on how many Palestinian children have been murdered by your "hero" IDF. Also, I would suggest traveling to the region--including the Occupied Territories before making such simplistic judgments.