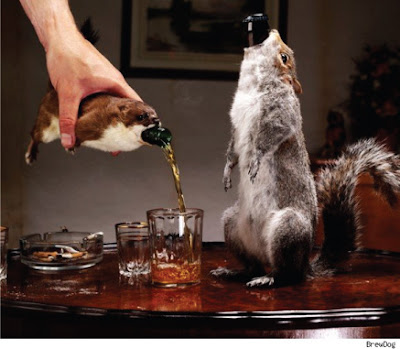 "All the human things are more dangerous than anything that affects the beasts - sex, poetry, property, religion. The real case against drunkenness is not that it calls up the beast, but that it calls up the Devil. It does not call up the beast, and if it did it would not matter much, as a rule; the beast is a harmless and rather amiable creature, as anybody can see by watching cattle. There is nothing bestial about intoxication; and certainly there is nothing intoxicating or even particularly lively about beasts. Man is always something worse or something better than an animal; and a mere argument from animal perfection never touches him at all. Thus, in sex no animal is either chivalrous or obscene. And thus no animal ever invented anything so bad as drunkenness - or so good as drink. " GKC


When I first heard of this I thought someone was talking about a scene from a Will Ferrell movie.
But it is true. The strongest beer in the world packaged inside stuffed woodland creatures.

Yes Grasshopper, they combined Chesterton's 'animal with drink' in a literal way.

This immediately brought three questions to my mind, How drunk do you have to be to think that:
1.) this is a good idea?
2.) that in the cold light of the next day it is still a good idea?
3.) people will pay $725.00 a bottle?

Of course, if I were rich, I have the personality that would buy a few for the drink and the laughs.
Posted by Alan Capasso at 9:09 AM