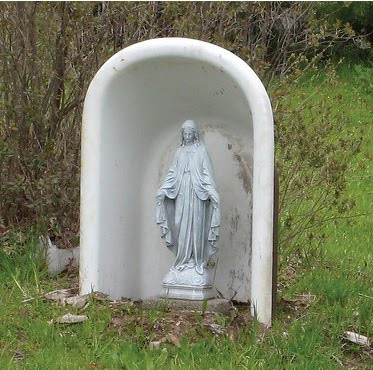 In John M. Grondelski article on Decorating Naked Public Squares he states, "The late Richard John Neuhaus described the banishment of religion from public life (and public view) as the phenomenon of the "naked public square." Advocates of this approach hold that religion has no place in public life. Public life should be hermetically sealed off from religion -- de facto agnostic. Secularists deem this arrangement "democratic" in a religiously pluralistic world. The corollary of that position, however, is that believers, even if they form a cultural majority, must strip themselves of their religious convictions when they enter public life. The good citizen is either irreligious or someone who doesn't take his religion too seriously. ...

There is also a shorter-range lesson. We as private citizens can go about reclothing the naked public squares of America, putting religion back in the public eye. How? Many Catholics in the United States have the resources to fund new religious art. Just as the Church hierarchy used to support Europe's artists, perhaps it is now time for lay Catholics in this country to take on the important work of patronage."
(emphasis mine)

An excellent idea. We should encourage those with the heart, spirit and funds to bring religious art back into the public square.

Oh yea, he is not talking about Bathtub Madonna or Lady of the Side Yard.


Chesterton on how public religious art can change our view of things:

Even when I thought, with most other well-informed, though unscholarly, people, that Buddhism and Christianity were alike, there was one thing about them that always perplexed me; I mean the startling difference in their type of religious art. I do not mean in its technical style of representation, but in the things that it was manifestly meant to represent. No two ideals could be more opposite than a Christian saint in a Gothic cathedral and a Buddhist saint in a Chinese temple. The opposition exists at every point; but perhaps the shortest statement of it is that the Buddhist saint always has his eyes shut, while the Christian saint always has them very wide open. The Buddhist saint has a sleek and harmonious body, but his eyes are heavy and sealed with sleep. The mediaeval saint's body is wasted to its crazy bones, but his eyes are frightfully alive. There cannot be any real community of spirit between forces that produced symbols so different as that. Granted that both images are extravagances, are perversions of the pure creed, it must be a real divergence which could produce such opposite extravagances. The Buddhist is looking with a peculiar intentness inwards. The Christian is staring with a frantic intentness outwards. If we follow that clue steadily we shall find some interesting things.
Posted by Alan Capasso at 12:33 PM