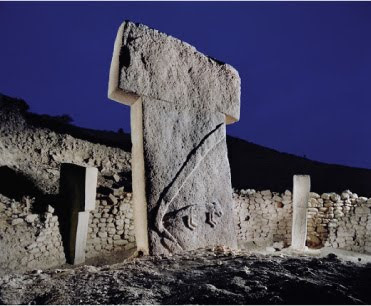 The word evolution seems to get attached to everything even things and ideas. Truth can not evolve nor change we can only discover what was always there or come to a better understanding. This is the work of the Church and should be the work of science. Both of those entities come together at Gobekle Tepe.

Klaus Schmidt, the archeologist credited with the discovery, says, "Many people think that this changes everything...It overturns the whole apple cart. All theories were wrong."
Maybe that's why so few people have heard of this or why the text books have not been changed - the "brights" have once again been proven wrong.

The temples thus offer proof that mankind emerged from the 140,000-year reign of hunter-gathers with a ready vocabulary of spiritual imagery, and capale of huge logistical, economic, and political efforts.

Schmidt's thesis is simple: it was the urge to worship that brought mankind together in the very first urban conglomerations. The need to build and maintain this temple, he says, drove the builders to seek stable food sources, like grains and animals that could be domesticated, and settle down to guard their new way of life. The temple begat the city.

Genetic mapping shows that the first domestication of wheat and pigs was in the immediate area.

Schmidt concludes that man's first house was a house of worship.

The other interesting thing of this site is that the people did not just abandon this site or die off. They took the time to bury it, a feat as great as the building of it. Why this happened we do not know. But they did discover at some point the worshipers here turned to human sacrifice.

Some are putting forward that is the site of Eden but as Scmidt says, 'Gobekli Tepe is not the Garden of Eden: it is a temple in Eden.'

"Maybe it was interred as a kind of penance: a sacrifice to the angry gods, who had cast the hunters out of paradise. Perhaps it was for shame at the violence and bloodshed that the stone-worship had helped provoke."


Chesterton tells us:
We have of course seen just lately the most dramatic exit of great material scientists from the camp of Materialism. It was Eddington I think, who used the phrase that the universe seems to be more like a great thought than a great machine: and Dr. Whitney as reported, has declared that there is no rational description of the ultimate cosmic motion except the Will of God. But it is the perishing of the other things, at least as much as the persistence of the one thing, that has left us at last face to face with the ancient religion of our fathers. The thing once called free thought has come finally to threaten everything that is free. It denies personal freedom in denying free will and the human power of choice. It threatens civic freedom with a plague of hygienic and psychological quackeries; spreading over the land such a network of pseudo-scientific nonsense as free citizens have never yet endured in history. It is quite likely to reverse religious freedom, in the name of some barbarous nostrum or other, such as constitutes the crude and ill-cultured creed of Russia. It is perfectly capable of imposing silence and impotence from without. But there is no doubt whatever that it imposes silence and impotence from within. The whole trend of it, which began as a drive and has ended in a drift, is towards some form of the theory that a man cannot help himself; that a man cannot mend himself; above all, that a man cannot free himself. In all its novels and most of its newspaper articles it takes for granted that men are stamped and fixed in certain types of abnormality of anarchical weakness; that they are pinned and labeled in a museum of morality or immorality; or of that sort of unmorality which is more priggish than the one and more hoggish than the other. We are practically told that we might as well ask a fossil to reform itself. We are told that we are asking a stuffed bird to repent. We are all dead, and the only comfort is that we are all classified. For by this philosophy, which is the same as that of the blackest of Puritan heresies, we all died before we were born. But as it is Kismet without Allah, so also it is Calvinism without God.
Posted by Alan Capasso at 8:33 AM

there is no evidence for "..a staggering 7,000 years before the great Pyramid" time of the great pyramids construction. There exists evidence that it is of similar antiquity to Gobekle Tepe. (It is also one of those theories that is wrong.)

Carbon dating may not be exact but it varies only in hundreds of years not thousands.Gobekle Tepe dates to 9,130 BC the Great Pyramid dates to 2,560 BC that is a 6,570 year difference. So i guess you are right it is not 7,000 years.

When Dr. Zahi Hawass, Minister of State for Antiquities in Egypt, was asked if it is possible that a great civiliazation existed before the great dynastic period he said, “Of course it is not possible for one reason. ... there is no evidence at all that has been found in any place, not only at Giza, but also in Egypt. People have been excavating in Egypt for the last 200 years. No single artifact, no single inscription, or pottery, or anything has been found, in any place to predate the Egyptian (dynastic period)....”

Atom, which theory is wrong?