The Man Who was Friday...

..Always makes it in during the weekend.

Oddly enough, still thinking about this same theme of Stoics, Philosophy in general, and GKC. As Ive been tossing around these ideas for the last couple weeks, its occured to me that I never have really given GKC his full due in this area.

In the Army, I was a 37F PSYOP NCO by MOS, and I spent my time in those information warfare circles. From this perspective, Chesterton is a true genius. He breaks open debates, makes thousand year old arguments seem alive and vital, and never allows his detractors to label him.

As Ive thought deeper, it amazes me how little we discuss Chesterton's inner life, and his spirituality. For all of his curmudgeonliness, (hehe, is that a word?) we know more about Belloc as a man of prayer, at least as a superficial image.

Some of the things that Chesterton says are not the products of a debater or a rhetoritician. Much of what he says have the flavor of the fruits of contemplation.

To quickly paraphrase those at the top of my head:
"Their pity is untruthful, and thier truth is pitiless" --regarding liberals vs. conservatives
"Hope is the virtue balanced between the sins of despair and presumption" --massacred paraphrase, but still sublime
"The Catholic Church is the only thing capable of saving a man from slavery to his age"

There is so much more out there than this, but I think the greater point to ponder is that these are not comebacks, or even apologetics, but an outer revelation of an inner experience.
Posted by Kyro at 5:47 PM No comments:

This is very good news! A new edition of The Coloured Lands

will be released this March by Dover Publications. The book by G.K. Chesterton was originally published posthumously in 1938, and I think it has been out of print since that time. So if you already have one, as I do, you probably keep it in that special bookcase that the younger members of your household are not allowed browse without permission; this in hope of keeping babies from tearing pages, and to keep chocolate milk from spoiling it. But these Fairy Stories, Comic Verse and Fantastic Pictures are a fun introduction to GKC for young readers. My 11 year old enjoyed reading his first Chesterton stories that Nancy C. Brown edited and republished two winters ago, The Father Brown Reader: Stories from Chesterton

. Since then he's searched for more Chesterton on his level and poked through a bit of Collected Works Vol 14: Short Stories, Fairy Tales and Mystery Stories. I think he'll be getting this new edition of The Coloured Lands for his 12th birthday.

I just got notice of this, thought I'd pass it on.

St. Sebastian's Church, Akron, will be hosting a performance of "Old Thunder: An afternoon with Hilaire Belloc", a one-man show featuring Kevin O'Brien, founder of Theater of the Word, on Sunday, March 15th at 1 p.m. in Zwisler Hall. The program is free and open to the public; a free-will offering will be taken.

Come and meet Catholic historian and poet Hilaire Belloc, who lived in England from 1870-1953. "Old Thunder" provides a stirring presentation, which includes Belloc's prophetic take on modern society and culture.

"Old Thunder: an Afternoon with Hilaire Belloc" is produced by Theater of the Word, a new company performing Christan drama throughout the United States. It is suitable for teen and adults and is approximately one hour long.
There will be books and other items available for sale after the program.
Posted by A Secular Franciscan at 10:50 AM No comments:

Ive been tossing ideas around in my head over the last week regarding Stoicism, Christianity, and the whole mileau of Athens vs. Jerusalem. Honestly, I think we most come to the conclusion that we live in the most hypocritical socieity of all human history. The early Christians, in the midst of persecutions, or in the era immediately thereafter absorbed immense portions of Greco-Roman thought. The later Church absorbed the warrior ethics of the Franks and some others and created chivalry. We preach openmindedness and inclusion politically but the tings we openmindedly include are a very, very narrow set up policy positions.

I think there is a negative on the side of conservatives to note as well. I think too often we, or at least I, tend to be archival in outlook. There is a tendency to look back for a pristine ideal which wasnt there. The energy carried by tradition is a living radience illuminating the path to the future. There is a temptation to get stuck in gaslight and torchlight quagmires. I think the traditionalist is openminded in the best way, and absorbs new knowledge in the proper means.
Posted by Kyro at 12:23 AM No comments:

Now available at Amazon for only $8.75
Posted by Alan Capasso at 4:21 PM No comments:

A Stoic view of Friday...

That was my attempt at a Stoic title. I just received my issue of Catholic Men's Quarterly, and I was quite interested in Eric Scheske's article about the Stoics.

Ive thought about these same issues as well. As Chestertoninas, we have the theme from The Everlasting Man, to paraphrase: Stoicism was the best that the pagan world had to offer, and it was supplanted by Christianity.

I would like to carry through this thought by looking at the Asian experience. Theravadin Buddhism, the oldest of all of the fragmented sects is basically saffron wearing Stoicism coupled with meditation techniques. Systems of Philosophy painted with the Stoic brush do seem to be end asking a subconcious question which might actually be an inner pleading and opening to grace. Christianity was the lock that the Stoic key opened......providing for the joy and fullness that it suspected, but could not reach by its own efforts. Likewise in Asia, the Theravadin schools of Buddhism became a numerical minority as its monks traveled Asia. Teachings of gods, heavens and hells were attached onto the teachings, providing more backdoor evidence that the human spirit has a natural yearning for a Messiah.

Eric did note that alot of the Greco- Roman philosophy of the Stoics was absorbed into Christian thought. This is a politically difficult thing now. Ive told people in arguments that even if a red telephone booth appeared in the room (all time travelers have one)and the bearded fellow who got out explained that he was the guy who had started Christianity as a joke, very few of my political ideas would change, that a great deal of what is publicly seen as matters of faith and revelation are actually secular, even atheist Greco Roman philosophy.
Posted by Kyro at 3:03 PM 3 comments:

The Press vs. Gossip

One night before slipping off to sleep I was reading Volume XXVIII of Ignatius Press’s collected works of Chesterton (don’t you keep a volume of that by YOUR bed?) when I came across the above essay. That particular passage jumped out at me.

During the recent Presidential campaign I read repeated criticism of the media and its coverage of the candidates. Studies confirmed that there was a clear bias toward Barack Obama by most networks and outlets. One network – NBC (especially MSNBC) – was blatantly in his camp.

As a result, we often did not get completely accurate coverage of Obama and his views if we relied on newspapers, television and radio.

Strangely enough, we often got more complete and accurate information from “gossip” in the form of the internet. Blogs, websites, etc. dug into his background and actions in ways that the mainstream media did not. Thus we discovered things about some of Obama’s questionable connections, his minister, his ties to the abortion industry, his attempts of conceal information, and so much more.

Yes, there was plenty of inaccurate information being distributed online – information that was not “within reason.” But if not for the “gossip,” there would be lots of true information we would not know.

Already I’m hearing people who got caught up in the hoopla surrounding his historic nomination and election beginning to wonder as he actually begins to act. They obviously relied on the Press. Those of us who kept our ears open to the “gossip,” are not surprised at all at much of what he is doing.

And there's more to come. Maybe some in the Press will even begin to pay attention. Eventually.
Until then, listen to the reasonable gossip. You might learn what's really going on.
Posted by A Secular Franciscan at 6:59 PM 1 comment: 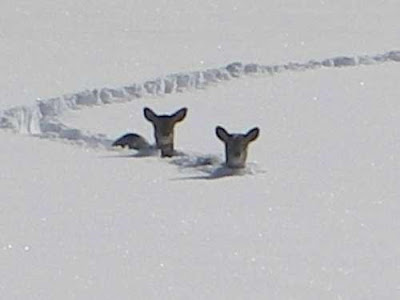 Summer's almost here in Ohio ...we can now see the deer moving around.

Reminds me of Chesterton’s words.


Posted by Alan Capasso at 9:27 PM No comments:

The folks over at Lifesitenews.com have up a column entitled "Why Pro-Lifers (and Everybody Else) Should Read G.K. Chesterton."

The author, John Jalsevac, notes that for a while Chesterton was not as much read as he used to be, although he is making a comeback.

But, he adds, "if everybody had kept on reading Chesterton, perhaps we’d never have found ourselves in the mess we’re in now, and LifeSiteNews wouldn’t have to exist. Instead of writing articles about how very progressive scientists are proposing that we kill our grandmothers, I’d be a travel writer, or a wine connoisseur. Life would be grand."

He admits that Dale Ahlquist is a friend (aha!), and notes that Chesterton's "writings remain one of the most potent cures for the madnesses that plague our age."

Read the whole column at Lifesitenews.com.

Then go read some Chesterton (instead, maybe, of watching the Super Bowl as NBC has rejected a positive but powerful pro-life ad even as it was willing to consider a provocative and suggestive PETA ad.)
Posted by A Secular Franciscan at 11:00 AM 2 comments: