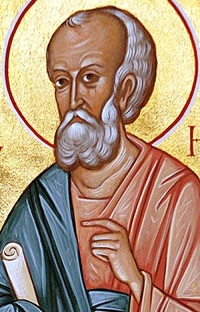 The prophet Amos
became justly famous
not for his cookie baking skill,
but for proclaiming God's will.
Posted by A Secular Franciscan at 8:42 AM No comments:

What's Wrong with the World

Chesterton Is Right About What’s Wrong With the World

Sophia Institute Press has just republished a book with a title that is as perennial as it is thought-provoking: What’s Wrong With the World by G.K. Chesterton.

Essentially a book of political philosophy, Chesterton lampoons, with forensic wit, what were then faddish ideas in Edwardian Britain. His four targets are: large corporations, even bigger governments, feminism and education. These and the then thinking underpinning them are the public “wrongs” he identifies, alongside an overarching one, namely, man’s fallen human nature.

First published in 1910, one may well ask: What does What’s Wrong With the World have to say to today’s world?

Depressingly, the same wrongs are with us still, if receiving fresh expression in the 21st century. Helpfully, Chesterton not only identifies “what’s wrong” with the world but also points out that what people, often erroneously, think is wrong, and then wherein lies the cure of the world’s ills. ...

You can read the rest of this fine review/essay from the National Catholic Register here - https://www.ncregister.com/features/chesterton-is-right-about-what-s-wrong-with-the-world

Posted by A Secular Franciscan at 8:49 AM No comments:


I got the online edition of the May/June issue of Gilbert - the print edition has het to arrive - and discovered one of my clerihews is in it.
Robert Burns
Hid behind some ferns.
He feared that he might be shot
By the husband of an auld acquaintance he forgot.
— Lee Strong, Rochester, New York
As always, I'm pleased when the good folks at Gilbert publish one of my clerihews. Over the years, they have published a number of them, for which I am grateful.
As I've been getting up in years, I've been thinking about compiling some of my poems and publishing them, possibly in individual books for different genres, one of which would be of my clerihews. I spoke with an illustrator about the clerihew book, then back in March I contacted Dale Ahlquist to see if it might be something the Chesterton Society would be interested in publishing. I also mentioned that I thought a large collection of clerihews published in Gilbert would be great.
Dale responded that someone had actually contacted him about doing that, and asked if I would be open to some of my clerihews being included.
I immediately said yes, and offered to help the person. I also wondered if this was something being done now, or if it might be a while before such a book could be put together. Dale said he had to dig up the email from the person, but given all the hats he is currently wearing  acknowledged that time was not something he did not have a lot of. So the book is down the road.
I haven't heard anything since, so I don't know the identity of the person who contacted Dale, and if/when the book will be pursued.
I'm still interested in helping. I'd love to be part of the process of compiling and editing it. There have certainly been many wonderful clerihews written by various poets and published in Gilbert over the years. The "Clerihew Corner"  is one of the first features I read when an issue arrives.
So if that person reads this blog, let's talk!
Posted by A Secular Franciscan at 9:29 AM No comments: