In attacking Pope Pius Rolf Hochhuth
penned a play full of untruth.
Sadly, many an ignorant dope
now believes the myth of "Hitler's pope."
Posted by A Secular Franciscan at 6:37 AM No comments: 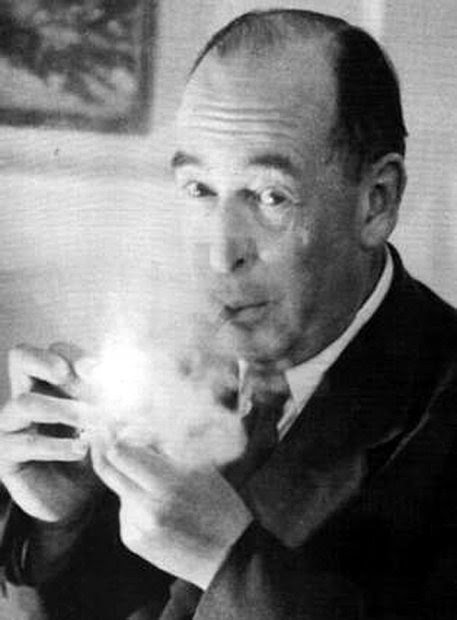 To mark the 50th anniversary of his death, C. S. Lewis has been honored with a memorial stone in the Poet's Corner at Westminster Abbey.

To be honest, I've never thought of Lewis as a poet. I love him for his theological works and his fiction. (Sort of like my thoughts about Chesterton.) I don't think I even own a collection of Lewis's poetry. (I own several volumes of Chesterton's - and have enjoyed them.)

I do remember one self-deprecating poem of Lewis's:

I am so coarse, the things the poets see
Are obstinately invisible to me.
For twenty years I’ve stared my level best
To see if evening–any evening–would suggest
A patient etherized upon a table;
In vain. I simply wasn’t able.
To me each evening looked far more
Like the departure from a silent, yet a crowded, shore
Of a ship whose freight was everything, leaving behind
Gracefully, finally, without farewells, marooned mankind.

Red dawn behind a hedgerow in the east
Never, for me, resembled in the least
A chilblain on a cocktail-shaker’s nose;
Waterfalls don’t remind me of torn underclothes,
Nor glaciers of tin-cans. I’ve never known
The moon look like a hump-backed crone–
Rather, a prodigy, even now
Not naturalized, a riddle glaring from the Cyclops’ brow
Of the cold world, reminding me on what a place
I crawl and cling, a planet with no bulwarks, out in space.

Never the white sun of the wintriest day
Struck me as un crachat d’estaminet.
I’m like that odd man Wordsworth knew, to whom
A primrose was a yellow primrose, one whose doom
Keeps him forever in the list of dunces,
Compelled to live on stock responses,
Making the poor best that I can
Of dull things . . . peacocks, honey, the Great Wall, Aldebaran,
Silver weirs, new-cut grass, wave on the beach, hard gem,
The shapes of horse and woman, Athens, Troy, Jerusalem.

I need to dig out more of his poems.

Today is also the anniversary of the death of John Kennedy, whose tragic death overshadowed that of Lewis.

While both men had an impact on the world, I think Lewis's influence will ultimately be greater.

Kennedy's legacy is based on his incomplete term as President. The record was mixed - but his assassination and the emotional impact of his death overwhelmed objectivity in assessing that record. He's a martyr, a romantic tragic figure. I suspect that when the dust of history settles he will be judged somewhere in the second tier of presidents (in the 14/15 range). One has to wonder  what he would have achieved had he finished out his term - and, as I suspect he would have - served out a second term.

But Lewis has only grown in stature since his death. His Mere Christianity is ranked as one of the spiritual classics of the 20th Century. His Chronicles of Narnia books and The Screwtape Letters also rank high. They -  and a number of his other books - continue to sell briskly and to influence people. Many people have discovered or rediscovered faith through his works, and, through the case of Narnia, the movies made from them.

I suspect years from now people will still be reading and cherishing Lewis's writings.

Long after Kennedy's achievements are relegated to the history books.

But I'm still not certain how Lewis's poetry will be remembered.
Posted by A Secular Franciscan at 4:02 PM 2 comments:


Ah, the great one keeps showing up in different places.

Up here in Western New York a local car company quotes Chesterton in an ad:

The ad begins with Chesterton saying "The greatest for of giving is Thanks-Giving."

The company says it will donate to a local charity during November, so maybe Chesterton would object to his name being linked to commercial venture.

Posted by A Secular Franciscan at 6:40 PM No comments: