The Rochester (NY) Chesterton Conference is tomorrow at St. John Fisher College. The usual gang will be there - including me. I'll take some pictures, keep some notes, and maybe write a clerihew or two.

As a side note, I'm teaching a writing class at my high school. I just introduced the students to clerihews. They have to write some of their own for next week. I hope to submit some of theirs to Gilbert - or at least post some here.
Posted by A Secular Franciscan at 8:30 PM No comments: 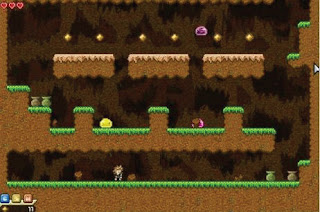 As one reviewer wrote, here's the thing about this game: "...it tricks you into playing it because it has the word 'diamond' in the title. You think it's going to be pretty and nice and kind of glamorous and ladylike and sweet smelling, like a gardenia. But then it's just like any game. You're supposed to kill stuff and collect points but the primitive animation makes it hard to tell the difference between the diamonds and the bad guys so you get confused and die many times over. Then you just give up.

Also, the diamonds in this game are the color brown."

Posted by Alan Capasso at 4:40 PM No comments:

Chesterton had alot to say about Margart Sanger and her club. He was one of the early voices to sing out against her type of progresive madness. “Progress,” G.K. Chesterton observed, “has discouraged anybody who had anything to say in favor of man, in his common relations to manhood and motherhood and the normal appetites of nature. Progress has been merely the persecution of the Common Man.”
He, of couse, was right. So why did hardly anyone listen. Sanger, long before Rules for Radicals was written, employed what Saul Alinsky wrote in the beginning of his book:
“What follows is for those who want to change the world from what it is to what they believe it should be.” Here is an excellant article of how she do the voodo she do so well.
Speaking of progress:
Mrs. H. Clinton, accepting Planned Parenthood’s highest honor, the Margaret Sanger Award, said “I want to assure you that reproductive rights. . .will be a key to the foreign policy of this administration.” For our little Hillary the taking of innocent life gets the same priority as issues of war and peace.
Secretary Clinton also told her adoring audience, “I admire Margaret Sanger enormously, her courage, her tenacity, her vision,” and “Margaret Sanger’s work is not yet done.”
Oh yes her work is not yet done because the one she worked for is not done the father of lies, the great accuser, that talking snake.
On this the feast day of the Arch Angels let us call them back to battle. Especially Michael
Posted by Alan Capasso at 9:12 PM No comments:

Planned Parenthood president Cecile Richards could not have been happy on September 15 when she was served with a letter from the U.S. House of Representatives Committee on Energy and Commerce announcing the opening of an official investigation and demanding financial and other documentation dating back 20 years in an effort to ascertain if the company is misusing federal funds and violating the law regarding the reporting of suspected sexual abuse and the aiding and abetting of sex traffickers.
My prayer now is that this is not just an other episode of political theatre.
This is a good beginning for 40 days of life.
Posted by Alan Capasso at 11:19 AM 1 comment:

JUST A HEADS UP

Father Barron's Catholicism TV series starts next week, (check your local PBS listings). I bought the book last week and although I am only a little way into it I would like to note two things:
The first is that Father Barron has so far quoted GK Chesterton and CS Lewis at least once per chapter.
The other is, if this TV series is only half as good as the book be prepared for bulging RCIA classes.
As Marc Barnes said, "The things we do should be fantastic. We’re not just anyone, we’re Catholics! What we do reflects our Church, and our Church is the only sane thing left in the world! Strive for excellence then, glorify God by using every drop of talent He’s given you, because I do believe that—now more than ever—our Church needs to reaffirm that we have brought the world the best literature, art, architecture, music and life it has. And that we still do."
Posted by Alan Capasso at 7:59 PM No comments:

doodlers of the world unite

I feel so much better now.
Posted by Alan Capasso at 3:59 PM No comments:

I am so glad the era of the "angry white chick" is over.
Posted by Alan Capasso at 3:10 PM No comments:

"What could it hurt?"

Brian Brown is the president and spokesman for National Organization for Marriage. NOM is working the front lines in the war on marriage. He is doing good work and I do not envy him. This video below shows you one of his skirmishes.
He lost this round not because he was wrong, (he was the only one in the room that was right), but he did not know how to state his point. He relied on common sense and obvious truths, stuff that was throw out decades ago.

“...the reason the government is involved in marriage is that taxpayers and society have a key interest in bringing together mothers and fathers to raise their children together”.

Brian, you need to articulate that interest.

“The government obligates third parties to respect and recognize your marriage, it does not merely enforce your private and personal agreements”.

Brian, why does it obligate any one to recognize that union?

Brian was out gunned and out maned. Some one needs to give him better sound bites. If I could think of any I would send them.

This just reminded me of the time before the roe v wade decision came down. No one thought it would happen the way it did - it just wrong and 'everyone' knew it. Surely the highest court in the land would see that, so no worries. Now 40 million babies later..........
I hope Brian succeeds I don't want anyone blogging 30 years from now saying. "How were we to know?!?".

The Ruth Institute is doing very good work as well.
Posted by Alan Capasso at 4:15 PM No comments: