Yuk It Up Folks

Two men considering a religious vocation were
having a conversation. "What is similar about the
Jesuit and Dominican Orders? " the one asked.

The second replied, "Well, they were both
founded by Spaniards -- St. Dominic for the
Dominicans, and St. Ignatius of Loyola for
the Jesuits. They were also both founded to
combat heresy -- the Dominicans to
fight the Albigensians, and the Jesuits to
fight the Protestants."

"What is different about the Jesuit and
Dominican Orders?"

When you look at the body of work on Catholic humor the Jesuits’ are the equvilent of blond or ethnic jokes in the secular world. Really, when was the last time you heard a joke begin, “ A Precious Blood Priest walked into a bar...” or “Two Carmelite Sisters of the Divine Heart of Jesus went to the beach...”

The odd thing for me is that some of the best and worst priests I’ve known or read were Jesuits. And their work in spreading the Devotion to the Sacred Heart of Jesus is truly driven by the Holy Spirit

It’s not that members of other religious orders don’t slip from the path it’s just that the Jesuits always do it with a monumentally arrogant flare. (two recent examples here and here).

There is a danger in fighting any opponent and it is not that you might lose the battle but lose the line that separates. The most effective way to fight a foe is to really understand him and the danger comes in understanding him so much you become like him.

And the problem with all religious, in fighting the secular world, is they begin to
embrace it’s ideals or think, “well it’s not really that bad.” like Father Jenkins at Notre Dame.

It is often the little slips that left unchecked turn into...well...big sin. For example, this past Sunday at my church, one of the petitions was “that government leaders work to solve the problem of climate change.”
There was no petition that they work to respect the dignity of life from conception to natural death.

Maybe it was joke.

I say Hello. I say Goodbye 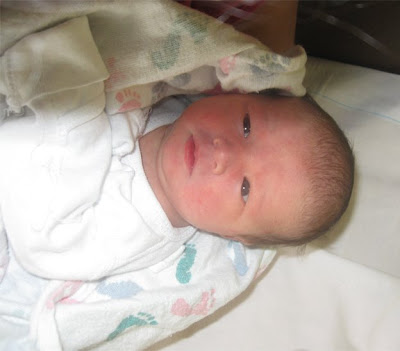 Please join me in welcoming to the planet my newest grandchild, Riley Ann. Yes, the world just got a little prettier.

Riley’s birth came few days after I helped bury my art professor and dear friend Mike Skop. Mike was “that person” who changed the trajectory of my life. He will be sorely missed.

I have reached an age where I know death and birth is not like changing five pennies for a nickel. Riley will never replace the hole left by Mike’s passing but someday I will tell her stories about him. Maybe, just maybe, there will come a time she will want to go into the studio and learn how to make pigment sing and clay dance. Then I will be there to show her the path Mike showed me.

Seek not to be like great men. Seek what they sought.


Posted by Alan Capasso at 4:01 PM No comments:

In Catholic tradition, a saint's feast day is the day he or she died.

Chesterton died June 14, 1936. If the cause for his canonization proceeds - as I expect it will - June 14 will in all likelihood be his Feast Day.

I can't wait until I see that Feast Day on my liturgical calendar.
Posted by A Secular Franciscan at 3:15 PM No comments:

After spending some time teaching kids which end of the pencil makes a mark I began reading, with interest, an essay by Tom Purcell entitled ‘A Pencil’s Point’ in which he summarizes
a 1958 essay by Leonard E. Read. I liked Tom’s essay so much I looked up Leonard’s and there in the opening he quotes “the wise” G. K. Chesterton. Which of course made me want to read more of Read’s work.

Although I have only just begun to read him it seems he does have a Chestertonian feel to his work.

As Jacob G. Hornberger says of Read’s work, “Leonard Read never permitted himself to fall victim to the malady which afflicts so many freedom devotees — depression and despair over freedom's prospects....Fighting for freedom was so enjoyable — so much fun — for this man that one cannot help but wonder whether he would have fallen into at least a temporary despondency had freedom been achieved in his lifetime!”

I will add a reading Leonard's essay to my next year's class.
Posted by Alan Capasso at 11:30 AM No comments:

"Greater love has no one than this, that he lay down his life for his friends."

Posted by Alan Capasso at 10:16 AM No comments:

MEDIA ADVISORY, May 29 /Christian Newswire/ -- G.K. Chesterton, the prolific and influential Christian writer, is the subject of a new book series for children, which has been announced on the 135th anniversary of his birthday.

Eternal Revolution is now taking preorders for the first book in the new Uncle Chestnut series: The Inconvenient Adventures of Uncle Chestnut.

Written for young readers, The Inconvenient Adventures of Uncle Chestnut contains 4 short stories told by Jack, whose Uncle Chestnut comes to take care of him while his parents are away. Whether traveling, chasing after hats, or embarking on everyday adventures, Uncle Chestnut teaches a unique perspective on life and the world to his nephew.

Based on the writings and actual events in the life of G.K. Chesterton, this work of fiction presents the wit and wisdom of the British writer in a considerably easier style for young people to read. It is a simple, fun approach to introducing G.K. Chesterton to readers of all ages.

Written at a 6th grade reading level for today’s students, The Inconvenient Adventures of Uncle Chestnut draws primarily from Chesterton's Tremendous Trifles and teaches the value of seeing everyday obstacles as exciting and unique adventures.

Eternal Revolution is offering two special offers for those who pre-order the book from Eternal Revolution at www.UncleChestnut.com before it is available. Pre-orders will receive a special discounted price and two free MP3 recordings of G.K. Chesterton presenting essays in his own voice.

The Inconvenient Adventures of Uncle Chestnut is expected to be available to the public on or about June 30, 2009, and will retail for $10.95. It will be available from Amazon.com, Barnes & Noble, and other booksellers. It is written by Paul Nowak, author of The Way of the Christian Samurai.

Wholesale and media inquiries can be directed to sales@dyinglight.com, or by calling 616-425-8873. For more information on the book visit Eternal-Revolution.com.

C.S. Lewis, author of The Chronicles of Narnia, credited Chesterton as a significant influence in his conversion to Christianity. Other famous persons influenced by Chesterton include Mahatma Gandhi, J.R.R. Tolkien, Alfred Hitchcock, Neil Gaiman, and Michael Crichton.