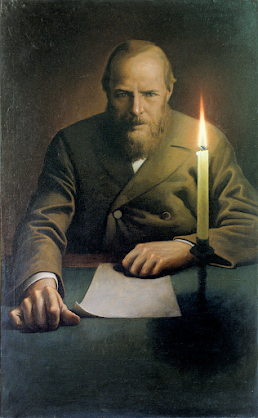 Should Fyodor Dostoevsky be counted as one of the "Friends"?
In reviewing a book about Dostoevsky, Chesterton once wrote:

"The one thing this Russian (Dostoevsky) loves is Liberty. The one place where he finds it is in … no, not Christianity… Christ. Compared with that, he cares nothing for anything. He was one of the two or three greatest novelists of the nineteenth century. And he cared for nothing but Christ who had made him free. It is worth thinking about."
As a fan of both Chesterton and Dostoevsky, I'm certainly willing to admit a Russian to the circel fo friends.

Posted by A Secular Franciscan at 12:45 PM No comments:

The Chronicles of Narnia Saved My Faith! 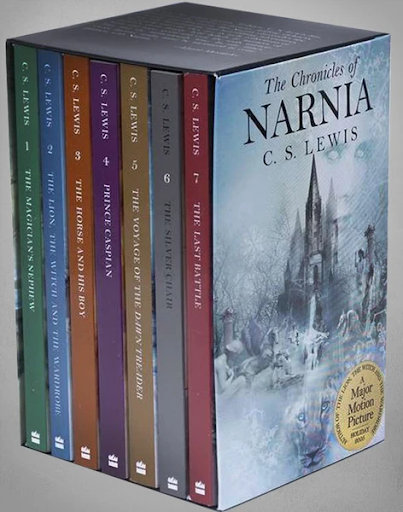 On November 22, 1963, President John F. Kennedy was assassinated. That tragedy naturally dominated the headlines, so it's no surprise that the death of C.S. Lewis the same day did not get as much attention.

I was alive then, though quite young. Still, I knew that Kennedy was our President. I remember the principal of my Catholic grade school coming on the P.A with the sad news and sending us home.

I had at that time never heard of Lewis.

I did not really encounter Lewis until 11 years later.

In the fall of 1974, I had taken a leave of absence from college as I dealt with various confusions in my life - including spiritual ones. Raised as Catholic, I had strayed from my faith - though it still played a role in my life. Indeed, that fall I somehow got hired as a "peer counselor" by a Catholic agency in New York City. My "salary" was a small stipend, and a rent-controlled apartment on the Lower East Side near the group home where I was to work.

The apartment had apparently been an office for the agency at some point. There were only a few items of furniture. But there were master keys to a number of other empty apartments in the building and the one next door that the agency controlled. Searching through those apartments I managed to scavenge  enough to furnish my apartment.

One item of furniture that was in the apartment when I moved in was a small bookcase with a few books in it. I didn't pay much attention to specific titles at first.

Shortly after I began working the group home I got involved with a small theater group developing a musical (that was later produced off-Broadway!). There I met a young lady, and soon we were dating. The young lady introduced me to her circle of friends, and I began to socialize with them

They were all big fans of Ayn Rand, and my girlfriend and her friends repeatedly recommended that I read Rand.

I read The Fountainhead and began Atlas Shrugged. The more I read, the more uneasy I felt. It was as if a sour, hollow place was growing in me.

One day as I headed off to work, I stuffed some dirty laundry into a bag; staff was allowed to do their laundry when the residents weren't using the washers. Thinking I might have a chance to read over lunch, I threw Atlas Shrugged into the back as well. When I got to the home, I hurriedly emptied bag into the washer forgetting the book was in there, turned on the machine, and went off to do some house duties.

When I returned later, Atlas Shrugged had become Atlas Pulped.

The pulp was mixed all through the clothes, and it took a long time to get all of it out. I interpreted it as a metaphor for what reading Rand was doing to my mind and my soul.

The Lord works in mysterious ways.

At Christmas, by careful scheduling, I managed to get more than a week off from work. I decided to spend Christmas with my parents, but, not having a car, I had to take the bus to where they lived in Western New York. I knew I needed something to read on the bus, and now free from Rand, I wondered what I should bring. It's then that I scanned that bookcase in the apartment and discovered the complete set of The Chronicles of Narnia.

I had heard of them - friends in youth groups had mentioned them - and looking for something lighter than the sludge that had been Rand, I figured some children's books would do just fine.

Over the next week - on the trip upstate, at my parents', and on the way back - I finished all seven of the books. I couldn't put them down.

Those books fanned the embers of my almost dead faith.

When I got back to New York. I quickly realized I had to stop seeing the girlfriend and her friends because of the negative influence they had on me. I also realized I needed to read works that nourished my soul.

That's when I read in quick succession The Seven Storey Mountain by Thomas Merton, The Confessions by St. Augustine, and Saint Francis of Assisi by G.K. Chesterton.

Those three books led me back to my Catholic faith. I even later entered the seminary, though I did not get ordained, and eventually became a Secular Franciscan.

Since then, I have also been an avid reader of both Lewis and Chesterton.

So today I remember and honor C.S. Lewis, whose little "children's books" saved my faith.

Posted by A Secular Franciscan at 4:23 PM No comments: 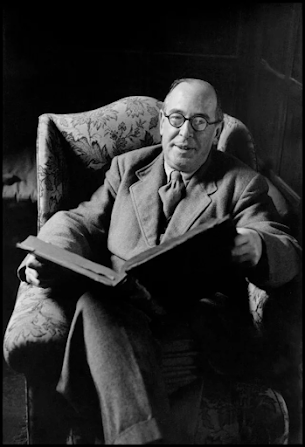 “Someday you will be old enough to start reading fairy tales again.” - C.S. Lewis
Posted by A Secular Franciscan at 8:05 AM No comments:

Belloc on Political and Economic Freedom 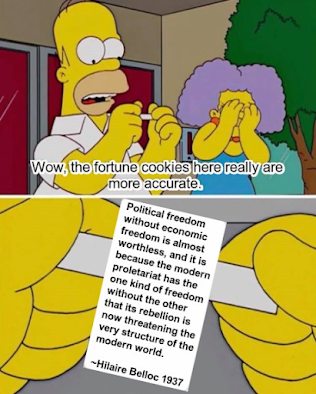 Posted by A Secular Franciscan at 6:52 AM No comments:

“Never perhaps since the beginning of the world has there been an age that had less right to use the word “progress” than we.”  - G. K. Chesterton

Posted by A Secular Franciscan at 6:28 AM No comments:

"One of the most important cultural figures in the last century was G.K. Chesterton; an astonishingly prolific writer, speaker and defender of Christianity. ..."

So begins "The courage, creativity and charm of GK Chesterton" in The Christian Post.

It's not an in-depth op-ed - just a general but positive overview by Canon J. John.

"We could certainly benefit from having men and women like Chesterton today, who can defend the Christian faith with courage, creativity, and charm."

Posted by A Secular Franciscan at 7:44 PM No comments: