Signs that the Apocalypse is upon us 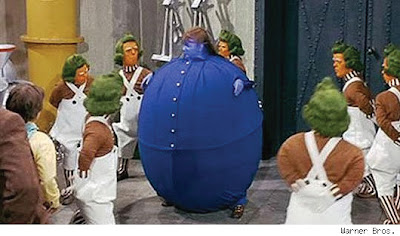 In a time when Taco Bell is being sued for not having meat in their meat taco we come up with meat water. For those vegetarians out there do not despair for you can still join the fun of drinking food with a grilled cheese and tomato soup martini.

I just hope they finally solved the problems Willy had with his Three-Course-Dinner gum.
Posted by Alan Capasso at 10:57 AM No comments:

And they want to regulate crisis pregnancy centers.

No one has been beaten, raped or killed in a crisis pregnancy center.

We are not hearing from the MSM about this because They Know It's True.
and
The Grand Jury has summed up this conspiracy of silence in a single damning paragraph. “Bureaucratic inertia is not exactly news. We understand that. But we think this was something more. We think the reason no one acted is because the women in question were poor and of color, because the victims were infants without identities, and because the subject was the political football of abortion.”
Posted by Alan Capasso at 12:03 PM No comments: 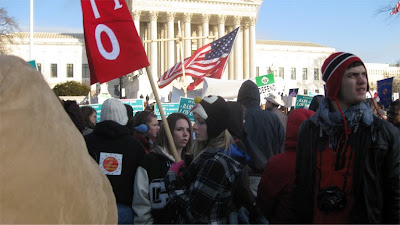 This has been the first time in many years since I did the March for Life. Last time I was there the march encountered several loud anti life groups along the march. There was a large visible presence of all the major networks. These are no longer there. The only media truck I saw was from EWTN and a few local news stations. The only anti life comments I heard were when we were walking to the mall I over heard a lady on her phone say, "Yea and they are making such a mess of the streets". - The other was when our bus (and several others) stopped 2 hours outside of DC I heard a trucker say, "I'm going to give money to the first pro-choice group I see." Hey, he was upset - a LARGE group of teenagers had invaded his truck stop.

The opposition has changed its tactics. They no longer confront because confrontation draws media. They now believe they are invincible and treat the pro-life movement as a child that does cute but stupid things.

When I first went there was a lot of political chanting - "End it now!" "No more Death!" etc. This year I heard several rosaries said, the divine Mercy chaplet was sung and I overheard one priest say to another, "We've lost Sister Mary Dominic." (OK that one just cracked me up).

When I first went the make up of the march was mostly middle aged white people. Now the majority of the participants were young and there was a large contingent of people of color. It was good to see the young there it lets me see this issue is being passed down and embraced.

I am not deluded to think that this issue will be resolved by the Supreme Court any time soon.

Certain demons can only be driven out through prayer and fasting.
Posted by Alan Capasso at 10:44 AM No comments:

Sonogram technol-oh-gee has come a long way. they can now pick up the faintest sounds in the womb

is it just me or are you excited and scared poopless at the same time by this
Posted by Alan Capasso at 6:50 PM No comments:

as if there were any doubt

Even at CNN they were gushing - although they tried not to.

Posted by Alan Capasso at 8:10 AM No comments:

Yes, read the article also read the comments. It seems that Rev. Herbert C. Mueller III started a fire storm in his support for the bishop. The comment thread outlines how much work is to be done. Once reality has been inverted it is hard to get it upright again.
Posted by Alan Capasso at 9:12 PM No comments:

I also noticed that the group that does the xtranormal films are using the same guy they used as G. K. Chesterton for Geiko commercials now calling him Sexy Grandpa. Not sure if Uncle Gilbert would approve or be laughing.

Posted by Alan Capasso at 3:40 PM No comments:

It is not enough to tolerate you must MUST approve.

"A purely libertarian society that only protected individual rights might let homosexuals form contracts and call them "marriages," but it would also permit every citizen to react to homosexual behavior by avoiding it -- if need be, by not hiring someone, or not letting him rent one's home. In a truly free country, people have the right to make such arbitrary decisions. We do not live in such a free country." (emphasis mine)
Posted by Alan Capasso at 3:34 PM No comments:

why work does not get done at work

When I was in the business world, as marketing manger and creative director, I was often asked why I did not have a cell phone so other corporate people could get in touch with me. I told them it was because there is no such thing as an art emergency.

One of the things I did well for the company was to budget the cost of a project because I always factored in think time and unnecessarily interruption time. The later was always created by the higher-ups since they don't actually do the work but feel the need to feel that they do. Higher-ups need to assign the work and then walk away. If they can't do that they are are either bad managers or hired the wrong people which means they are bad mangers.

The problem that faces all creative directors is that since everyone knows which end of the pencil makes the mark they think they are all artists. Or they think the artist eats lead and drinks ink then poops art - "so what's taking so long?!"

This of course is not just a problem for the creative types but any one working in an office trying to get something done. As a mathematical formula the higher the number of vice presidents a company has the less work gets done.

"It is perfectly obvious that in any decent occupation (such as bricklaying or writing books) there are only two ways (in any special sense) of succeeding. One is by doing very good work, the other is by cheating. Both are much too simple to require any literary explanation. If you are in for the high jump, either jump higher than any one else, or manage somehow to pretend that you have done so." -GKC

Many companies have managers willing to cheat surrounded by those who don't want to.

This guy has got it right. but will 'they' listen

Posted by Alan Capasso at 12:16 PM No comments:

I began this past Advent and Christmas time with a Lenten approach. I would stop being snarky (man I'm glad that's over) and I would stop listening to angry talk radio, (I don't think I will go back to that).

Sooo, from 'what could it hurt' department: A new way of educating: "The school stresses student independence over teacher-led lessons, scientific inquiry over rote memorization and freedom and self-expression over strict structure and discipline."

Open class rooms were tried in the early 70s (I was there) and were an unmitigated failure. The kids did not learn and if the personality's of the teaches were not a perfect mix they pulled the wagon in different directions or fought over who rules the fiefdom. And I never saw a perfect mix because the incentive to get along is not there. Teaching is a job, not a marriage.

“Fallacies do not cease to be fallacies because they become fashions.” GKC

“Men invent new ideals because they dare not attempt old ideals. They look forward with enthusiasm, because they are afraid to look back.” GKC
Posted by Alan Capasso at 3:10 PM No comments:

Posted by Alan Capasso at 3:48 PM No comments:

a bad idea in a sad time 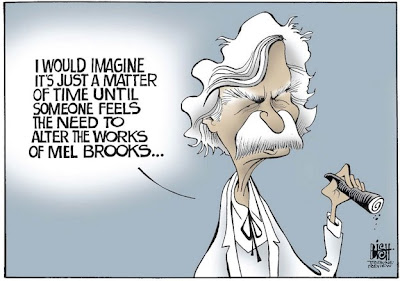 "They", the fanatically polically correct, are removing the "N" word and other offensive words from Mark Twain's "The Adventures of Huckleberry Finn". (here and here and almost everywhere).
I remember the uproar when Ted Turner started colorizeing all the Black and White films he owned. "It (colorizing) is a process of dissembling the historical and artistic fabric of our landmarks," Cates said. "Once you say you can add color, why can't you add a different score, add shots, re-edit it, or do anything you want?" Ted does not do this anymore.
The same can be said for books. Some publisher may not like the ending of a book so he changes it since the author is long dead - no law suit. No one owns the works of Mark Twain yet some feel it neccesary to change it, mostly those 'that have fallen off the left side of the boat white people'.
If this goes unchallenged imagin what They might do to Chesterton. Although most of Them don't know he ever existed.
In true fairness they should just remove all the Ns from Twain's work so the lead character will now be called Huck Fi.
Posted by Alan Capasso at 2:39 PM 1 comment:

E. C. Bentley
evidently
knew just what to do
with a clerihew.
Posted by A Secular Franciscan at 5:19 PM No comments:

I had a substitue assignment today with the High School music department - what fun! The String Orchestra is working on the Barber of Seville so this is what has been going through my mind all day:

Thought you would enjoy this.

A key point is the charitable way in which he debated. Would that we all had such charity in our words.

G K Chesterton, saint of the blogosphere CatholicHerald.co.uk
Posted by A Secular Franciscan at 2:35 PM No comments: