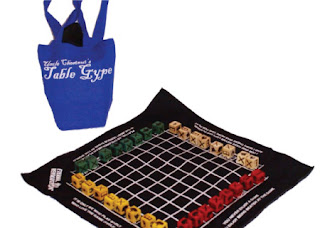 I have been trying to get deep into lent and especially Holy Week but this news was worth lifting my head for and sharing with all you Chesterton nuts.

Paul Novak’s Table Gype won the MENSA Select award for 2011!
And in the second edition the packaging has been improved as well as wooded game pieces – no longer will “some assembly be required”

If you have yet to get yours now is the time.
Posted by Alan Capasso at 9:40 AM No comments:

When Alexander Pope
slipped on a bar of soap
the couplet he muttered was neither stoic
nor heroic.
Posted by A Secular Franciscan at 6:38 AM No comments:

John Paul II sums up the inventible out come of the European existential world view:

"At the root of this loss of hope is an attempt to promote a vision of man apart from God and apart from Christ. This sort of thinking has led to man being considered as 'the absolute center of reality which makes him occupy — falsely — the place of God and which forgets that it is not man who creates God, but rather God who creates man. Forgetfulness of God led to the abandonment of man.' It is therefore no wonder that in this context a vast field has opened for the unrestrained development of nihilism in philosophy, of relativism in values and morality, and of pragmatism — and even cynical hedonism — in daily life. European culture gives the impression of 'silent apostasy' on the part of people who have all that they need and who live as if God does not exist."

But then JP2 is a phenomenologist so he concludes

"Be confident! In the Gospel which is Jesus, you will find the sure and lasting hope to which you aspire. This hope is grounded in the victory of Christ over sin and death. He wishes this victory to be your own, for your salvation and your joy.
"Be certain! The Gospel of hope does not disappoint! Throughout the vicissitudes of your history, yesterday and today, it is the light which illumines and directs your way; it is the strength which sustains you in trials; it is the prophecy of a new world; it is the sign of a new beginning; it is the invitation to everyone to blaze new trails in order to make the continent a true common home filled with the joy of life."
Posted by Alan Capasso at 5:09 PM No comments:

We don't know if Benito Mussolini
ever wore a bikini,
but there are reports he once sang a song
while wearing a thong.
Posted by A Secular Franciscan at 5:05 PM No comments:

Who doesn't love a good haunted guitar song.
The Guitar by Guy Clark

Posted by Alan Capasso at 3:55 PM No comments:

I was at the library when I spotted a book by Paul Johnson called Humorists: From Hogarth to Noel Coward. The title alone attracted me, but I would probably have passed it by, except on the cover among the list of the "humorists" was ... G.K. Chesterton.

Okay, I had to take it out. He refers to Chesterton as "A Living, Talking Gargoyle," and begins the chapter on GKC with "It is hard to think of Gilbert Keith Chesterton (1874-1936) without laughing. Or I find so."

He points out that Chesterton found humor in even serious subjects: "GKC never regarded humor as inappropriate, intrusive, or out of place. On the contrary. It was, or should be, welcome always and everywhere, especially in religious discussion."

He gives some background on GKC, noting that like many of his generation he could have become just another "aimless bohemian," but "He was saved by marriage, his wife, Frances, being a sensible and practical person."

I agree with that conclusion. Frances was a gift from God.

Johnson does raise the rumors about the marriage being unconsummated - I find in many of the other chapters in the book he also tends to wander into matters of sexuality - but questions that assumption and argues that it may just be a way GKC's enemies to attack him.

He goes on to provide some interesting (though familiar) insights about Chesterton as a humorist.

The book is clearly intended for folks who might not be familiar with the writings and humor of Chesterton, or who perhaps have not analyzed the humor of some of the other featured humorists (Benjamin Franklin, Laurel and Hardy, The Marx Brothers, James Thurber, and Charlie Chaplin being among some of the others).

If you spot it, check out what he has to say about Chesterton. It's worth the read - and it's a quick read.

Posted by A Secular Franciscan at 9:21 AM No comments: