Every now and then I search online and at news sites for mention of G.K. Chesterton.

Occasionally I’ll find an interesting essay focusing on him, or a discussion that cites his ideas and arguments at length.

But most often, I find the mention of him is in passing in the form or a quotation or a paraphrase of a quotation. That is all fine, and it certainly helps to keep him in the public eye. And he certainly said many clever, witty, interesting things, and given his prolixity, there's ample material with which to work.

But I also wonder if it may also have an unfortunate effect: Could this make it easier to relegate him to the dustbin of history – or to dusty editions of “familiar quotations”?

It almost seems that his eminently quotable nature makes it easy to focus more on what he said and less on what he had to say. For too often the quotations are simply treated as quips that are now divorced from the larger contexts of cogent discussions of some significant topics.

I was suddenly reminded of Dorothy Day who, when people used to talk about her being declared a saint, often responded that she did not want to be dismissed so easily.

I hope that by being so quotable Chesterton will not be easily dismissed. He has too much to say to our age to be relegated to collections of witticisms.
Posted by A Secular Franciscan at 5:59 AM 2 comments:

Would he, could he?

The recent announcement of a special provision that would allow Anglicans/Episcopalians to reunite with Rome en mass while retaining some elements of their denomination and its rites got me to thinking about C.S. Lewis.

There has been endless speculation already about whether he considered becoming Catholic - and if so, why he held back - or that even if he didn't give it serious thought in his time were he alive in recent years and given the direction of the Anglican Church would have have been more open to doing so. And he certainly espoused some ides - such as Purgatory - that were more Catholic than Anglican.

We can only speculate, of course. And the provision might not have made a difference to him one way or another.

I do wonder how many Anglican/Episcopalians will indeed decide to take advantage of the provision? I wonder how many readers of Lewis who were drawn back to a more active Christianity and Anglicanism will take the next step.

I also wonder what Chesterton would have made of it. He need no such provisions to conclude that the Catholic Church was where he belonged.

"I think I have known intimately by now all the best kinds of Anglicanism, and I find them only a pale imitation," he declared.

And now, at least one kind of Anglicanism can now be truly Catholic.
Posted by A Secular Franciscan at 5:12 PM 3 comments:

While visiting the local Catholic bookshop - with a gift certificate burning in my pocket - I discovered in the Christmas display (yes, even there the season is coming early) a little gem.

Advent and Christmas Wisdom from G. K. Chesterton, by the folks at the Center for the Study of C.S. Lewis and Friends.

It was published by Liguori in 2007, so others may have already taken note of it. But it was new to me.

Selections from Chesterton's writings along with Scripture and prayers. Interesting.

I have only glanced at it, but when I do get time to read it I will report back.

For now, I am occupied with William Oddie's Chesterton and the Romance of Orthodoxy.
Posted by A Secular Franciscan at 9:44 PM No comments: 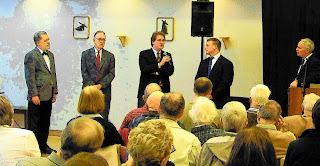 Dale Ahlquist seemed to be on a mission: To link everything to Chesterton.
During the September 26 Rochester Chesterton Conference, Dale, with a smile, somehow managed to get a mention of Chesterton or Chestertonian ideas into every discussion. He even said that Pope Benedict was a good writer - but he would be even better if he quoted Chesterton more often.
Okay, he's doing his job. What do you expect from a guy whose wife suggests he found reading Chesterton the highlight of their honeymoon!
Ahlquist added a lighter touch to the conference that, while it had some amusing moments (who picked an Irishman to introduce that old Irish Catholic basher Joseph Pearce?!), was at times a bit heavy going. Good, enjoyable, enlightening - but not quite what one might have expected from a conference whose title was "Re-Awakening Wonder."
The conference featured not only Ahlquist ("The Universe and Other Little Things") and Pearce ("Standing on Our Heads: Wonder as the Key to Happiness"), but also Tom Howard ("On Childhood, Art, and Eternity") and David Higbee ("Wonder in Holy Writ"). The latter two were the first two speakers, neither had the style that Pearce and Ahlquist had, and both read speeches that, to be honest, sounded like they would have been better as magazine articles, or college lectures.
Enough negativism. I did enjoy the conference. I alwuays enjoy Dale and Pearce, and I wanted to hear Howard, whose books I have read with pleasure. I left with a number of things to mull over.
Howard talked about the "capacity to see wonder in ordinary things." He pointed out that childhood, art and eternity are the three realms in which to experience glory. In childhood, we see the world with a sense of wonder. We lose that sense of wonder as we grow older, but art can help us to glimpse it again. He noted that "childhood and art seem to me to be the harbingers of eternity."
He then talked at length about C.S. Lewis, and in particular the Chronicles of Narnia,. Those seven books help us to rediscover the glory inherent in the ordinary. He made me want to reread Lewis - especially the Chronicles.
Higbee said that wonder is at the "heart of all true spirituality." He pointed out the sense of wonder and awe in multiple scriptural citations.
Pearce noted that while mature Christians are not childish, they should still be child-like.
He suggested that when God turned His back on Adam and Eve, he may have been laughing - as a parent might laugh after punishing a child. For God knew what was to come, and the glory that awaits us.
"Ultimately the key to happiness is learning to love as God loves, and learn to laugh as God laughs."
Ahlquist quoted Chesterton repeatedly - so much so that I wasn't sure at times what was Ahlquist and what was Chesterton. Which was absolutely fine with me.
Overall, a good day.
Posted by A Secular Franciscan at 5:53 PM 2 comments: