Benedictus XVI makes a TWEET.
Launching a new web page: news.va where you can get the latest news from the Vatican.
Oh yea, he also celebrates his 60th anniversary as priest today.
Posted by Alan Capasso at 9:55 AM No comments: 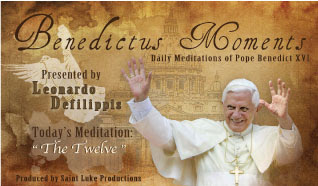 Daily meditations by Pope Benidict XVI in english.
Very Cool.
Posted by Alan Capasso at 11:10 AM No comments:

On Yahoo news you might have seen the blurb called ‘No 'him' or 'her'; preschool fights gender bias’. A little story about a preschool in Stockholm that does not use gender specific language or toys or I suppose bathrooms.

All this is done, of course, in the name of equality. I know many of you are shaking your heads thinking those crazy Swedes and you might even be afraid to read the article knowing that with each step in you will get closer to having your head explode from the onslaught of absurdity. However there was line in the story where the loony grenade went off in their hands. To show how right thinking they are they mentioned a book where you do not need a mommy and daddy just two caring adults, "From a bookcase she pulls out a story about two male giraffes who are sad to be childless — until they come across an abandoned crocodile egg."

I do not know this book but all I could think of was when that crocodile grows up it will eat its parents.

Maybe I'm just projecting reality on to the situation which will always get you twisted up.

"When logic and proportion
Have fallen sloppy dead
And the White Knight is talking backwards
And the Red Queen's "off with her head!"
Remember what the dormouse said;
'Keep YOUR HEAD'."

Another note on Fr Corapi

When I first heard about the problems Fr. Corapi was having I was shocked but not surprised. I had heard several of his talks about the possibility of this kind of thing happening to him as it has to other priests. Is it possible that the allegations are true - yes it is possible. However there was one allegation that did not ring true to me and that was his "occasional" drug use.

In his own story Fr Corapi admits of his previous drug use. He was an addict spending everything he had for a fix. In my work with junkies there are a few things that are always true. The first is the habit can be beaten but they are always and forever a junkie. It is impossible to go back to occasional use and when they do fall off the wagon it is always back to the drug of choice. Just like an alcoholic can never become a social drinker nor switch to crack, a crack junkie can not do an occasional line nor swith to whiskey.

There is another thing about junkies and that is the personality trait that made them addicts in the first place does not go away. So they do sometimes trade a hard drug for a hard philosophy. The field of social work and counseling is filled with ex-junkies. Some make the trade to bodybuilding, or drive harder back into their pervious profession or become Jesus freaks.

Fr Corapi had traded his drug habit for the priesthood and he had become a fame junkie so it did not take long for Fr. Corapi to go into full withdrawal when the scandal broke. After the attack all of his media outlets, except his website, were cut off to him. In one of his talks he had mentioned that if this kind of allegation happened to him he would just spend more time with his dogs and do a lot more fishing. His addictive personality could not let him do that.

His withdrawal first manifested itself in an attack on his accuser all over his web site. "Not my fault!" - "I was framed" - "She is unbalanced." This at first,for me, seemed way out of character until I remembered that for junkies it is never their fault and everyone is out to get them. And I knew then he was in deep spiritual trouble.

Then there was silence from him and I thought he was going to work through the process. Yes, the process is deeply flawed and one that fully states you are guilty until proven innocent and in time it will correct itself until then we just have to suck it up.

This past week Fr. Corapi has said he is leaving the priesthood. He said it in a whining-burn your bridges sort of way. Now not only is his accuser unbalanced his Bishop seems to be too. Here I was both shocked and surprised. In his many talks about Spiritual Warfare he has stated correctly that the devil attacks the priesthood because if there is no priest there is no Eucharist and no Eucharist no power. Yes, in some of his talks he made stuff up or exaggerated events of his past I forgave him those because they were stories used to high light a theological truth. The substance of those talks were true then and are true forever what he is doing now does not change that. He has just been overpowered and beaten by Satan and it is for that reason I pray for Fr. John Corapi.

There are two many examples from the saints that have gone through a beat down that Fr. should have modeled but no... he turned and walked away. Again that's what junkies do.

He now says that through his new Black Sheep Dog program he will be able to reach more people with his message, (note: it is now his message not Jesus'). I do not know how this will happen since EWTN gave him a world stage. Maybe he will become a radio talk show host or FOX news will make him a commentator all I know is that fame junkies do not end well. Maybe he needs to go through that fall again to get back on the right path.

Table Gype can now be played for free online at BoardGameArena.com!
Posted by Alan Capasso at 10:01 AM No comments:

The March/April issue of Gilbert Magazine just arrived (never mind that it's now June!), and it contained several of my clerihews.

Perhaps the editors have lowered their standards!

Lot's wife
ended her life
when she came to a halt
and proved her salt.

In his early life Thomas Merton
was often uncertain.
He ended his consternation
through contemplation.

Vladimir Kosma Zworykin
helped to make possible television.
His contribution to that form of mass media
is why he's one of the last entries in our encyclopedia

Anne Rice
found a pearl of great price.
But she had to make money first
dwelling on an unnatural thirst.

Prolific Stephen King
can make horror out of anything.
His wife fears what he'd do
if he tried to barbecue.

Of course, payment consists of the satisfaction of seeing my name in print and being part of that fine publication (subscribe if you don't already!).

I won't quit my day job.
Posted by A Secular Franciscan at 5:00 AM No comments: