Chesterton frequently uses the fence or wall as a metaphor in his writings.
My favorite and is this one:
“Catholic doctrine and discipline may be walls; but they are the walls of a playground. Christianity is the only frame which has preserved the pleasure of Paganism. We might fancy some children playing on the flat grassy top of some tall island in the sea. So long as there was a wall round the cliff's edge they could fling themselves into every frantic game and make the place the noisiest of nurseries. But the walls were knocked down, leaving the naked peril of the precipice. They did not fall over; but when their friends returned to them they were all huddled in terror in the center of the island; and their song had ceased.”

Personally I hate it when it takes a pile of bloody feathers to learn something.
Posted by Alan Capasso at 1:25 PM No comments:

In art a style can never be imposed nor predicted. It grows organically from any given epoch reflecting the needs, wants and desires of that epoch. Great art always reflects a timeless universal truth that moves through every epoch. Another way to say that is that every epoch has it’s own stories and story tellers. To truly understand the events and people in any point in history you most know their stories and story tellers.

The problem with many historians today is that they do not know the stories of the time they are reporting on or worse, they apply our stories to that time and that leads to a gross misrepresentation of that time. Otherwise know as revisionist history.

In Belloc’s book, The Crusades, he takes extra care to remind us of the story and the story tellers of that time. He points out the successes and failures of that first crusade in light of how the participants of that time viewed the world and themselves. The book reads like a detective story as told in flash back because he tells us the end in the first few pages.

The reason, of course, that this account of the Crusades is not used in schools is that the story of the time is Christianity and the cause of the Crusades was to save Christendom. Also Belloc, rightly so, connects he and us to that story and frequently uses phases like, “We failed…” or “Our fathers…”. Also he does not paint the Mohammedan forces as noble nomads just looking for a homeland as in Ridley Scott’s Kingdom of Heaven but as what they really were at that time a barbaric culture bent on destruction incapable of building and creating anything.

The other reason is that he predicts that since we lost the main goal of the crusades, “we have by no means seen the last of the results of the 12th-century Christian military failure against Islam.”

Much better review of the book is here
Posted by Alan Capasso at 4:09 PM 1 comment:

Belloc's Windmill To Be Closed

Hilaire Belloc's windmill, the largest working windmill in West Sussex, is closing its doors to the public. See BBC article Historic windmill forced to close for the sad details.
Posted by Joe at 11:42 AM No comments:

Epigram "On His Books" published in Sonnets & Verse:

When I am dead, I hope it may be said:
"His sins were scarlet, but his books were read." 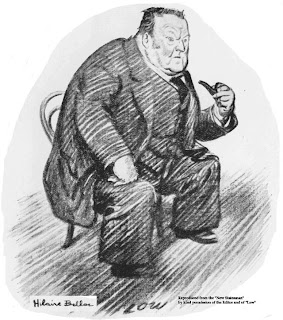 published today on ZENIT:
Interview on Possible Beatification of English Author
By Antonio Gaspari
Posted by Joe at 4:50 PM 2 comments:

In case you missed it A.N. Wilson’s review of The Paradox Who Was Chesterton
New evidence about the development of G. K. Chesterton's ideas and his progress towards Roman Catholicism
By William Oddie was posted here.

Whenever I see a review of Chesterton’s work in the Mass Media I always hold my breath a little thinking that at any moment it will mention GK “Antisemitism” or his "unfavorable view of women” which usually has nothing to do with the work being reviewed. This review, thankfully did not mention any of those. It did however pick up a new dig against Uncle Gilbert, again nothing to do with the book, when Wilson interjected this little nugget:“(for there is bizarre talk of GK’s canonization)”. I guess they just can’t help themselves.

Anyway here is an except from the review:

"Chesterton’s fiction and journalism were dashed off at speed. This is not to say that they were not on some levels deeply considered. It could be said, truthfully as well as Chestertonianly, that he was never deeper than when he was being superficial. Many of his wisest remarks are the throwaways, but you do not necessarily preserve the truth of a throwaway remark by patching it together with other throwaway remarks to construct a Summa. Chesterton’s observation about angels – that they can fly because they carry so little weight – applies to his own writings."

And yes Wilson got the quote wrong the true quote is "Angels can fly
because they take themselves lightly."
Posted by Alan Capasso at 9:19 PM 4 comments:

Paul Nowak, author of the recently published The Inconvenient Adventures of Uncle Chestnut, sent this note:

I've been meaning to let you guys @ Chesterton and Friends know a couple things:

1) A while ago you mentioned Neil Gaiman using GKC in Sandman - I got a small scan of a few panels here:
http://eternal-revolution.com/573/chesterton/gk-chesterton-comic-hero/

2) I've not managed to post about this myself, but Simpsons artist Luis Escobar did a cartoon of GKC/Uncle Chestnut on his blog: http://www.luisescobarblog.com/?p=334

The Gaiman/Sandman posts referred to are GK Comics in 2005 and GK and the Sandman in 2006. Aeons ago on a blog timeline. How wonderful that these bubbles can rise to the surface when someone gets the hankering to google.

"Uncle Chestnut" received a thumbs up from my 11 year old son. I greatly enjoyed it myself, and will post a review shortly.