An open letter to Melinda Gates

but will she listen
Posted by Alan Capasso at 9:14 AM No comments: 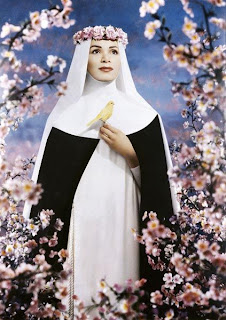 was plagued by earthly beaus.

To discourage their thoughts of marriage

she used pepper to spice up her visage.
Posted by A Secular Franciscan at 9:29 AM No comments: 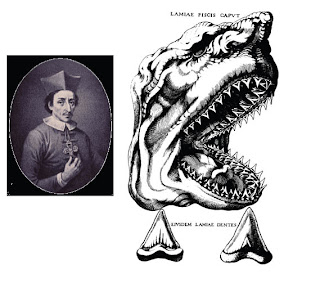 “Nicolas Steno was a Danish Renaissance man who believed in proving to himself long held beliefs and disgrading things shown to be false.  This strong drive for the truth led him to become the founder of geology and laid the ground work for the development of archaeology and paleontology.  His first major test was analyzing his Lutheran beliefs.  When Steno reasoned that Catholicism was more grounded in traditional Christianity than Lutheranism Steno converted.  He would study and follow his new faith all the way to becoming a bishop.

But geographers and other earth scientists better know Steno for his geological work.  Later on Steno discovered rock strata were actually layers of rock which formed on top of each other over time.  He stated the deeper one digs into the earth the older the material.  Before Steno this was too much a leap for scientists to realize due to the general scientific disinterest in anything below the Earth's surface unless it was for alchemy.  His discovery also ended the belief in an unchanging creationist Earth.  Since then all science has agreed the Earth is dynamic.

Steno's anatomical studies focused at first on the muscular system and the nature of muscle contraction -for example, he used geometry to show that a contracting muscle changes its shape but not its volume.
However, in October 1666, two fishermen caught a huge shark near the town of Livorno, and Duke Ferdinand ordered its head to be sent to Steno. Steno dissected it and published his findings in 1667.
The figure above shows the figure published by Steno of the shark's head and teeth. While examining the teeth of the shark, Steno was struck by their resemblance to certain stony objects, called glossopetrae or "tongue stones," that were found in certain rocks. Ancient authorities, such as the Roman author Pliny the Elder, had suggested that these stones fell from the sky or from the moon. Others were of the opinion, also going back to ancient times, that fossils naturally grew in the rocks. Steno's contemporary Athanasius Kircher, for example, attributed fossils to a "lapidifying virtue diffused through the whole body of the geocosm." Steno, however, argued that glossopetrae looked like shark teeth because they were shark teeth, that had come from the mouths of once-living sharks, and come to be buried in mud or sand that was now dry land. There were differences in composition between glossopetrae
and living sharks' teeth, but Steno used the "corpuscular theory of matter", a forerunner of atomic theory,
to argue that fossils could be altered in chemical composition without changing their form.”

Oh yea, he also sold his bishop's cross and ring to help the poor.

Posted by Alan Capasso at 9:30 AM No comments:

Jackson Pollock
facing possible painter's block
discovered that what matters
to the critics were his splatters.
Posted by A Secular Franciscan at 10:36 AM No comments:

Why yes I did go to Gilbert's house- you may envy me now. Ok maybe not. Gilbert's house is privately owned so there was no walking around the grounds. London has a Chesterton society that schedule several trips (they call them pilgrimages) to his house and grave sight however they were doing these the weekend before and the weekend after I was there. So I had to find these sites on my own which was no easy task. I had to take two subways to the end of the line and then grab a bus. I then missed my stop by two towns. The driver was very kind and gave me a transfer ticket back to  Beaconsfield. I can understand how Gilbert would get lost coming and going.

Once there I wondered around trying to get directions to Gilbert's and Frances' house, I was ill prepared. I thought everyone would know but noooo. The first six people I asked had no idea who I was talking about. I then went into the parish hall of St Mary's Church and still all I got was, "Who?". I finally ran into a lady mopping the floor who knew. It was a short walk away.

As I took the corner of Grove Road I saw a sign, "Chesterton Gardens", it was a dentist office. The next building was his house. I did not stay there long because walking up and down the side walk staring at this house even made me feel creepy.

I did have a beer at The Royal Standard Pub which I am sure was a place where Gilbert graced more than once.  I wish I had more time to wonder around the town but the buses do not run late.

Interesting that, aside from the circle plaque on GKC's house there is nothing in this town that says Chesterton was ever there. Even several of the web sites dedicated to Beconsfield don't mention him yet there is a larger than life statue of Sherlock Holms on Baker Street which draws more photo taking visitors than the Globe. Like the Rocky statue in Philly

One source of pride came from reading the London Chesterton Societies page where I came across this:
The American Chesterton Society
This must be the world’s most successful Chesterton organization, and is to no small extent responsible for the fact that Chesterton is taken very much more seriously in the U.S. than in the land of his birth. In its present form the society is the creation of Dale Ahlquist, whose larger than life personality is reflected by this extrovert all-singing all-dancing website.
Posted by Alan Capasso at 10:34 AM 5 comments: