Black and White and Chesterton

At the Rochester Chesterton conference I picked up a copy of Chesterton in Black and White. It's a collection of previously uncollected early Chesterton essays from Black and White and The Bystander
In the first essay, "That Black Is, in a General Sense, White," Chesterton discusses the nature of paradox, contending that paradoxes are actually quite common, "built into very foundations of human affairs," as exhibited in "universal and ordinary arrangements, historic institutions," and "daily habits." And he goes on to state, "As a matter of fact, it is the ordinary view and language which is paradoxical."
Chesterton uses the example of the word "white." A person may be described as "white," but that person is not really white. Nor are "white wine" or "white grapes" actually white.
He continues in that vein. While he is discussing linguistic "paradoxes," however, the essay got me to thinking about language and how we use - or misuse it. Words become vague or distorted in meaning - sometimes unintentionally, sometimes intentionally.
Take the word "love," for example. The word has been so overused that its meaning has been twisted out of shape. Thus I can say I love coffee, or the Buffalo Bills, or clerihews, or my wife. Obviously, there are varied levels of meaning or intensity. Indeed, my love for my wife is far deeper and richer than my love for those other parts of my life.
My examples of love cited above are all innocuous. But there are other uses of "love" that turn the meaning of the word on its head. Love can be taken as just a physical act - to make love - that really has nothing to do with the true meaning of love. When it comes to sexual matters, in fact, love is often used as an excuse rather than a reason. A person might declare he is showing love when he is cruel, violent, or destructive. Just look at some of the actions of terrorists who act out of love of country or of faith.
There are many other possible ways in which language is manipulated. Take the example of two people going for a walk in the woods. Birds are singing, insects and frogs are chirping, the breeze is rustling the leaves. Suddenly one of the persons unhappily blurts out that it is too quiet. It is certainly not quiet, but that person is unhappy that these sounds he is used to and desires are not there. But because it is not what he wants, he fails to see and appreciate what is there. Thus the word "quiet" has assumed a meaning separate from objective reality. It is now defined subjectively.
Which is one of the problems of our age. Words are more and more viewed through subjective lenses. They are too often set adrift from the "universal and ordinary arrangements, historic institutions," and the "daily habits" that once helped to define them, and to give them solid roots.
Thus words like "choice" or "family" or "racist" are cut of from their traditional, common sense meanings. We can have politicians say our borders are closed because the official ports of entry are closed, even though a mile to the east or west of those closed ports people are freely and in large numbers crossing that border.

We end up with a Humpty Dumpty situation with those in power in some form declaring in a scornful tone, "When I use a word, it means just what I choose it to mean — neither more nor less." Which gives them all the control - as, I suspect, some of them actually want.

In such an unstable verbal world, one might end up as Chesterton notes with an honest official actually speaking the truth, and then being accused of just making a joke, of saying something fantastic, and subsequently subject to reproach. In these less gentle times, that person might lose his job, be hounded on social media, perhaps even suffer a physical attack.
Indeed, we seem to be living in a dystopian time where words are deliberately manipulated to destroy and to control. Motherhood becomes a negative thing, for example, interfering with one's life and career, or becoming a kind of vulgar insult. A time where war is peace, or at least good business. Freedom is slavery. Ignorance is strength.
But fortunately there are still some folks who have enough common sense to recognize that nothing is completely black or white.
Posted by A Secular Franciscan at 3:32 PM No comments:

“You can’t go back and change the beginning, but you can start where you are and change the ending.” - C. S. LEWIS
Posted by A Secular Franciscan at 8:35 AM No comments:

The conference drew an enthusiastic crowd to St. John the Evangelist Church - St. John Fisher College, which hosted the previous conferences was not available - heard about Poetry: Fruit of Christian Joy. 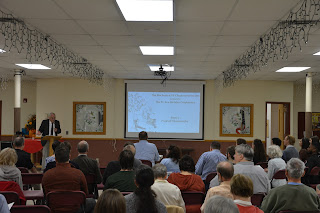 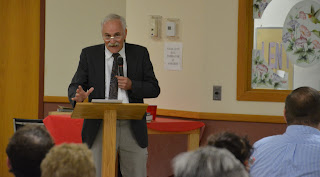 Ted Janiszewski discussed the poetry of the Psalms. 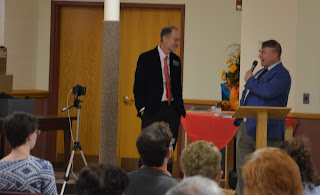 Joseph Pearce talked about poems every Catholic should know. 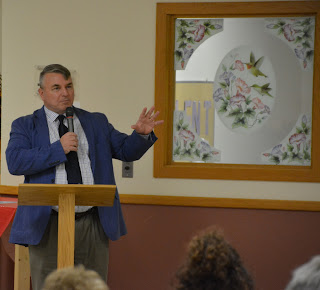 And then the conference concluded with a dramatic reading (led by Dale Ahlquist) of selections from Chesterton's The Ballad of the White Horse. 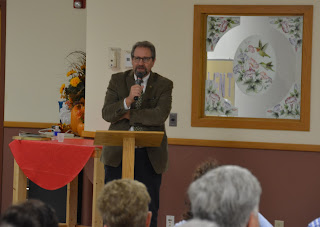 It was a typically delightful Chesterton conference, full of inspiration and laughter and ... Christian joy.

Posted by A Secular Franciscan at 9:05 PM No comments: 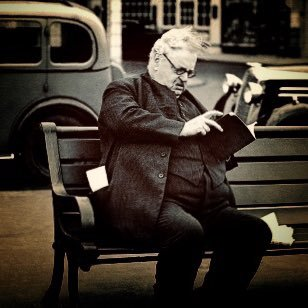 G. K . Chesterton, with Father Brown and The Detection Club, certainly plays an important tole in the history of mystery stories.

I am a fan of such stories - and not just of the Father Brown tales.

Sayers has Chestetonian ties - and inspired this clerihew:

Lord Peter Wimsey
was never deterred by evidence flimsy,
but his confidence suffered years of strain
when faced with the mystery of Harriet Vane.
Meanwhile, Hillerman's Navajo mysteries inspired the following:
Officer Jim Chee
studied the remains of a flea.
Although respect for nature is part of his Navajo beliefs,
he didn't appreciate this critter getting into his briefs.

I haven't tried my hand at a Sherlock Holmes clerihew. Maybe it's time!
Posted by A Secular Franciscan at 3:22 PM No comments:

A Chesterton hymn that fits our times

O God of earth and altar

O God of earth and altar,
bow down and hear our cry,
our earthly rulers falter,
our people drift and die;
the walls of gold entomb us,
the swords of scorn divide,
take not thy thunder from us,
but take away our pride.

From all that terror teaches,
from lies of tongue and pen,
from all the easy speeches
that comfort cruel men,
from sale and profanation
of honour and the sword,
from sleep and from damnation,
deliver us, good Lord!

Tie in a living tether
the prince and priest and thrall,
bind all our lives together,
smite us and save us all;
in ire and exultation
aflame with faith, and free,
lift up a living nation,
a single sword to thee.
Posted by A Secular Franciscan at 8:20 PM No comments: 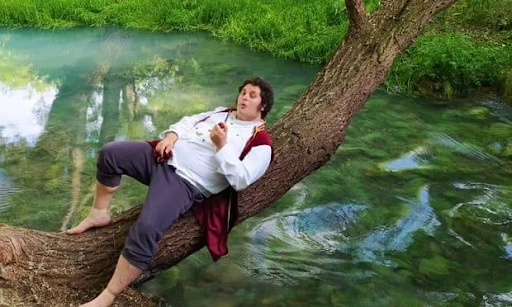 Nicolas Gentile, 37, has lived like a hobbit on two-hectares of land in the Italian countryside for over a year. Giacomo Savini e Luciano Masiello/ Courtesy of Nicolas Gentile
Here's the story about some of the actors from the movies appreciating his effort.
In the story, Gentile says, "I have always loved fantasy literature and movies, Dungeons and Dragons, and video games," he said. "But at some point in my life, I felt like I was living the adventures of others and not my own. I decided that I, too, would live my life like a character in the movies and books I loved so much."
Hmm. Given reality these days, maybe living in a fictional world for a while might be a reasonable choice.
Posted by A Secular Franciscan at 6:20 PM No comments:

THE MOST RELUCTANT CONVERT: THE UNTOLD STORY OF C.S. LEWIS | OFFICIAL ...

To be honest, I don't know much about the play - and I've not heard of the movie coming out until now.
Posted by A Secular Franciscan at 2:07 PM No comments:

While looking through a book I was thinking of donating to the library book sale (I'm in the process of culling my bookshelves to simplify my life), I came across a piece of paper on which I'd written this clerihew:

Harriet Beecher Stowe
dealt slavery a blow
with a powerful novel that "started a war,"
sadly few read it any more. 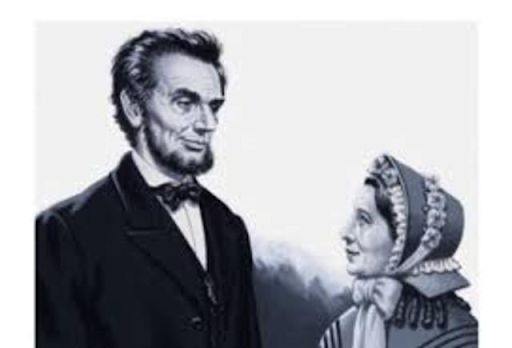 I don't know for sure when I wrote it, but i suspect it was when I taught Uncle Tom's Cabin a few years back.

Posted by A Secular Franciscan at 3:56 PM No comments:

He liked us, he really liked us! 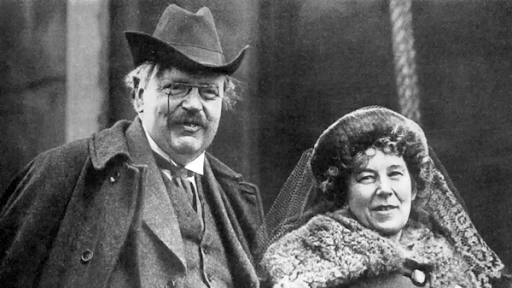 "Unlike most eminent English literary travelers in America, whatever their political or ideological views, Chesterton actually liked the U.S.A., both theoretically and emotionally, and his grounds for doing so are worth knowing about."

Posted by A Secular Franciscan at 7:00 AM No comments:

On the Road with C.S. Lewis 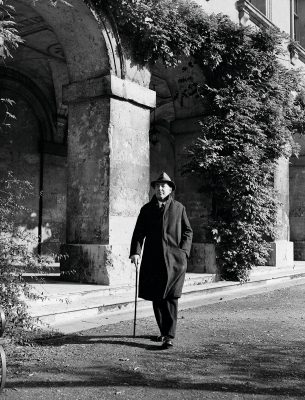 “One road leads home and a thousand roads lead into the wilderness.”- C.S. Lewis
Posted by A Secular Franciscan at 6:49 AM No comments:

Chesterton and the "superstition" of science 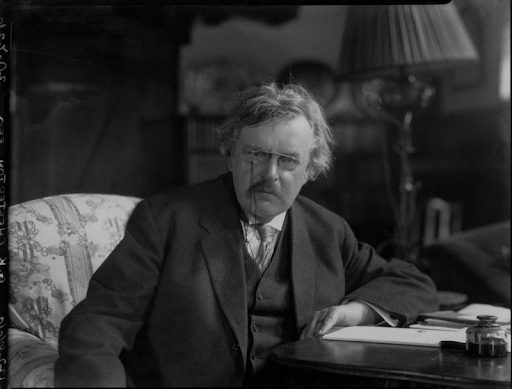 Unfortunately science is only splendid when it is science. When science becomes religion it becomes superstition. - G. K. Chesterton
Posted by A Secular Franciscan at 8:44 AM No comments:

I just took a survey sent out by The Society of Gilbert Keith Chesterton. One of the questions listed online resources - and blogs were not mentioned.

Now I know blogs are often viewed as outdated. But they still exist - as does this blog. But when I decided to look at this one after completing the survey, I discovered no one had posted in almost a year - and I was the last to do so. Indeed, I had made most of the most recent posts.

When this blog began, there were a number of contributors. Each of them took a day on which he would try to post. I was invited to join, and I became Thursday. I liked that.

But I was not as consistent as I should have been, and in the last few years only popping in a couple of times a year. And the other members of the team basically stopped.

I will try to keep this blog on life support.

Posted by A Secular Franciscan at 3:21 PM No comments: