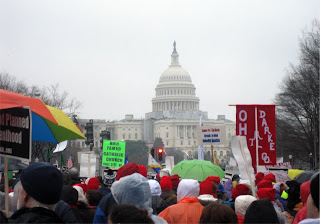 Those in the red caps is our group

It’s been said that the reason the Government Media Complex does not cover the March for Life is that, “Since it happens each year it is not news.” I would like purpose that since it does happen every year makes it news.” and here is another good reason why they stay away. Also the numbers that go is growing. Last year it was estimated that 400,000 people were there this year they are saying it is close to a half million. I don't know if that is true but I do know that we filled our bus this year and when we tried to take a break at a truck stop outside of DC we were told that there was no room for our bus. None of that has happened before.

I took my youth group to The March for Life in DC again this year. Yes it rained, it was cold, and we were tired from the red eye bus trip, but they knew why they were there why they had to be there. A couple of my kids smiled when one of the politicians said, "If only we had a republican president and control over both houses we could end this!" These kids knew the history. We had that and still nothing was done. Most of the Marchers know that the ruling class has no intention of seriously battling Planned Parenthood, NARAL and the like, they are learning what Chesterton meant when he said “....Hope means hoping when everything seems hopeless.” It is easy to feel discouraged and that the situation won't change. However many of us are encouraged. We can't expect someone else to do the heavy lifting for us anymore. Maybe this is an inadvertent positive change the current occupant gave us.

When he says stuff like this, “I remain committed to protecting a woman’s right to choose and this fundamental constitutional right.” we know he is full of crap.

New Year's
by Dana Gioia
Let other mornings honor the miraculous.
Eternity has festivals enough.
This is the feast of our mortality,
The most mundane and human holiday.
On other days we misinterpret time,
Pretending that we live the present moment.
But can this blur, this smudgy in-between,
This tiny fissure where the future drips
Into the past, this flyspeck we call now
Be our true habitat? The present is
The leaky palm of water that we skim
From the swift, silent river slipping by.
The new year always brings us what we want
Simply by bringing us along—to see
A calendar with every day uncrossed,
A field of snow without a single footprint.
Posted by Alan Capasso at 1:52 PM No comments:

I was reading a recently published collection of the best Chesterton essays when I thought of a local Chinese restaurant.
I wasn't thinking of Chesterton's dining habits. Indeed, I have doubts that Chesterton ever ate what we think of as Chinese food - though I don't know that for certain. Maybe he did enjoy an egg roll or some chow mein at some point.
The restaurant in question serves meals, but the bulk of its business is its buffet. It has four rows of various Chinese and non-Chinese foods - pizza?? - with heated pans and heat lights. Most diners just grab plates and wander up and down the rows taking a little bit of this and a little bit of that, though there are always some individuals who grab a lot of this and a lot of that until their plates are piled so high one wonders how much of the food will actually make it to their tables.
Once while eating in this restaurant I began to reflect on differing styles of enjoying a buffet of this sort. I observed some people who would go to one row, fill their plates from that row only, and then head back to their seats to eat. When they finished their first plate they would then go back and load up from the second row, and so on, in order until they had visited each row. Did some of them methodically take a little bit of everything? Perhaps.
Then there are those who circulated among the rows, taking this from this row and that from that row. When they went back, they continued the pattern. Perhaps they had favorites and only ate those foods. Perhaps they were afraid to try new things. Or perhaps they were like me, vegetarians who avoid meat dishes.
Recalling this restaurant got me to musing about reading styles when approaching collections of any sort.
There are some people who seem to enjoy by sampling pieces in various sections of the book. Perhaps they seek out particular topics or writers, or maybe they just trust to luck and read whatever they come to that captures their interest.
There are some collections that lend themselves to this sort of sampling.
Then there are those people who methodically work their way through the collection from preface to index.
There are some collections that lend themselves to this approach.
Both methods have their pluses and minuses.
The sampling method ensures that one will enjoy what one reads for such readers tend to gravitate toward those things for which they already have an interest.
But in doing so, such readers might miss out on gems that just didn't happen to catch their attention.
The methodical readers take in everything the collection contains, good and bad, and thus might have a complete understanding of the organizing principle behind the collection, and along the way perhaps discover unknown treasures and nuggets of information they might otherwise never have encountered.
On the other hand, they might also run into a patch of less interesting pieces that might lead them to stop reading.
When it comes to Chesterton, either approach is acceptable. You can just plunge in and sample as the spirit moves you. Or you can work your way through from beginning to end, knowing that because it is Chesterton there won't be any less interesting pieces to get you questioning whether or not to go on.
When it comes to the restaurant - and many collections - I tend to be a sampler.
With this collection of Chesterton, I'm going the cover-to-cover route.
Either way works well when accompanied by a nice cup of tea.
Posted by A Secular Franciscan at 1:22 PM No comments:

I've been busy with school work - and the sickness that now has me on antibiotics. But I did manage to squeeze in some good reading.

First up was Exiles, by Ron Hansen, and interesting account of Fr. Gerard Manley Hopkins and the five nuns that became the inspiration for his poem, "The Wreck of the Deutschland." I've always enjoyed historical "fiction," and this gave me some insights into his life. Good read.

I also just finished (while sitting in the doctor's waiting room) The Man Who Invented Christmas, by Les Standiford. It's an account of Dickens' writing A Christmas Carol, and the effects it had on his career and how the book helped to revive the celebration of Christmas. Also a good read - especially for fans of Dickens and Christmas (like me).
Two thumbs up.
Now, back to those Chesterton essays.
Posted by A Secular Franciscan at 2:23 PM No comments: