The Patron Saint of Television! There's a legend that St. Clare
appeared at the '36 World Fair.
Some folks at the television display claimed they did see
on the screen the face of the fair saint from Assisi.
Posted by A Secular Franciscan at 8:01 AM 1 comment:

EWTN rebroadcasts this wonderful show Monday mornings at 6:30. What a pleasant way to begin the week.

Though it is odd seeing Dale without a beard!

Posted by A Secular Franciscan at 6:52 AM No comments:

The 100th anniversary of Chesterton’s conversion—and its ripple effect 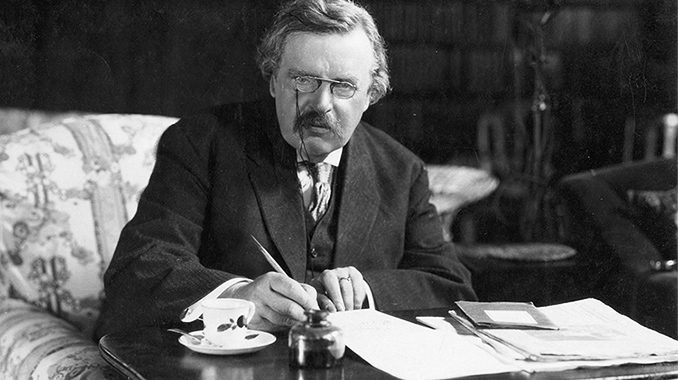 When G.K. Chesterton was received into the Catholic Church one hundred years ago, on Sunday, July 30, 1922, it was big news. Except it wasn’t. It didn’t quite qualify as “news” because nobody knew about it. The two priests who received him into the Church – Fr. John O’Connor, his long-time friend who was also the inspiration for Chesterton’s immortal fictional detective Father Brown, and Dom Ignatius Rice, a Benedictine monk from Douai Abbey – vowed to say nothing about the ceremony. Not for any religious reasons. They just wanted to see how long it would take the press to find out.

And it was big news when it was finally reported. Except it wasn’t. At least for part of the reading public. Many of them thought Chesterton was already Catholic. After all, he’d been defending the Catholic Church for years, and taking the Catholic position at every turn, on every topic, and in every controversy. And he’d already written two dozen popular stories featuring the aforementioned Father Brown.

But there was also many Chesterton admirers and devotees who were genuinely surprised because they refused to believe he would ever do something so inconceivable as actually joining the Catholic Church. This group included both Catholics and non-Catholics, from his best friend and faith Papist Hilaire Belloc to his good friend and philosophical opponent George Bernard Shaw who had long made fun of what he called Chesterton’s “Roman Catholic hobby.” When Shaw heard the news, he fired off a letter to his debating partner saying, “Gilbert! This is going too far!” And Belloc, in genuine and pensive awe, wrote: “I never thought it was possible.”

The reaction within the Church of England, to which he belonged, also ran the gamut. When the local vicar in Beaconsfield heard the news, he said, “I’m glad Chesterton is going over to Rome. He was never a very good Anglican.”

On the other hand, an editorial in the Anglican weekly, The Church Times, said what was strange about Chesterton was not that he had become Catholic, but that he had remained so long in the Anglican communion. The growing liberalism within the Church of England was driving away the educated laity, and had never “attracted one educated man to the church” but rather “robbed that church of the genius of G.K. Chesterton.”

In contrast, the Catholic papers were ecstatic. THE TABLET’s headline crowed: “THE HOMECOMING OF MR. CHESTERTON.” It likened the conversion to that of John Henry Newman, and expressed happiness over having Chesterton’s happiness in the Church. “He will not let the devil have all the frolic.” But it also expressed what many felt: that Chesterton would not change.They wanted the same Chesterton they had already come to know; not a new one, just a Catholic one.

Chesterton called his conversion “the chief event” of his life. And we can say that in his writing and in his public persona, he didn’t change. In fact, there is not a discernible difference in his post-conversion writings from his pre-conversion writings. Except there is. He does in fact take on specific Protestant doctrines and is more specific in his rebuttals of them. He had always challenged Calvinism, but he zeroed in more on Luther. He had always demonstrated a mastery of Scripture but took apart the “Bible-worshippers” whom he found as small minded as the “Bible-bashers.”

He said there were ten thousand reasons, but they all amounted to the same reason. It was because “The Catholic Church is true.”

But when asked, these were some of the other reasons he gave.

The most striking answer: “To get rid of my sins.” Only the Catholic Church can do that.

Another answer was the sober realization that the Anglican Church wasn’t Catholic. “I always believed in the Catholic view of Christianity, at least I have believed it for twenty years. Unless the Church of England was a branch of the Catholic Church, I had no use for it. If it were a Protestant Church, I did not believe in it. In any case the question is whether the Church of England can claim to be in direct descent from the medieval Catholic Church …

“It appears to me quite clear that any church claiming to be an authoritative church must be quite definite when great questions of public morals are put. Can I go in for cannibalism or the murder of babies to reduce the population, or any other scientific and progressive reform? Any church with authority to teach must say whether it can be done. But the Protestant churches are in utter bewilderment on these moral questions.”

One of the moral questions was contraception. When Anglican bishops became champions of what Chesterton called “a low and poisonous trick, not far removed from infanticide,” he realized they were taking a position that was essentially heathenism. They were speaking with no unity, no authority, and could not denounce open immorality. He wanted to be part of the Church Militant. As he explained to his mother, he was joining “the one fighting form of Christianity.”


He was accused – and dismissed – as having a romantic attachment to a love of ritual and the aesthetics of the high Middle Ages with its Gothic Cathedrals reaching towards heaven.

But in a letter to a man named Bertram Hyde, who had raised these very concerns and asked him truly why he became Catholic, Chesterton responded: “I ought to say first that, saving the grace of God, my own conversion to Catholicism was entirely rational; and certainly not at all ritualistic. I was received in a tin shed at the back of a railway hotel. I accepted it because it did afford conviction to my analytical mind. But people can see the ritual and are seldom allowed to hear of the philosophy. About ritual itself I think the truest thing was said by Yeats the poet, certainly not a Catholic or even a Christian; that ceremony goes with innocence. Children are not ashamed of dressing-up, nor great poets at great periods, as when Petrarch wore the laurel. Our world does feel something of what Wells says, because our world is as nervous and irritable as Wells himself. But I think the children and the poets are more permanent.”

Which brings us to the ripple effect of Chesterton’s conversion. G.K. Chesterton might be one of the greatest makers of Catholic converts of the last century, and the ripples continue to be felt.

But here’s another ripple. Because I became Catholic, my wife became Catholic, too, that is, she returned to the Catholic Church in which she had been baptized and confirmed, but it was a faith she had never really lived, until we both embraced it. We had the great pleasure and blessing of getting married again, by having our marriage validated by a priest. And because we became Catholic, for some reason we had four more children. And because we had those children, we eventually started the first Chesterton Academy. And because we started the first Chesterton Academy, there are now almost 50 other Chesterton Academies in five countries, with more schools in the works. These schools have led to young men becoming priests and young couples getting married in the Catholic Church, and revival of Catholic classical education across the country and across the world.

Posted by A Secular Franciscan at 8:53 AM No comments: