My Country Right or Wrong? 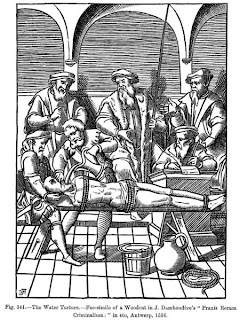 I see that Sean over on the Blue Boar put up a post of Mark Shea's about waterboarding, and linked to a "Hannitized" T Shirt making light of the practice. I really applaud Sean(Dailey, not Hannity) et al for really calling this out as a life issue and something to be condemned as dehumanizing and not to be condoned by a Christian society.

My thinking on this is in the process of changing....Im somewhat close to these circles. My award for an ARCOM coming out of Iraq includes "587 Interviews conducted" in the Achievement #2 paragraph box. For the purposes of my unit's information requirements, we were considered passive intelligence collectors, and soft interrogators, to use the proper term. In 2003, most of the folks we ran into were somewhat happy to help us. There was an energy in the air of potential despite the chaos and upheaval. I know that the practice of waterboarding is associated more with Gitmo, and the more clandestine activities of certain agencies, but Ive questioned myself many times about my Iraq experience, in terms of where I was in my head at the time and how I would have viewed certain things. This is the task of a lifetime, so Im patient with myself on it. As Ive thought and read more and more about the Gospel, Just War, Augustine, and Chesterton, I end up coming to what I feel are solid conclusions. Some I feel like sharing, others not.

I feel at one hand we are on a slippery slope towards micromanagement of hour by hour soldier tasks. Most combat is based off of ambush/counterambush. Once the element of surprise is taken away, one comes closer and closer to an organized, ritualistic duel. As a PSYOPper, I know about tactical loudspeaker, and surrender appeals, which are appropriate for certain situations. What I am afraid of is the requirement for the offering of surrender as part of the law of land warfare. This could ultimately lead to MORE loss of life on both sides, as an intransigent enemy could use those vital seconds or minutes to fortify a position and prepare to take on an entry team or counter them in mid-maneuver. What this has to do with waterboarding? There is a tough, brutal reality to the situation that just does not come across through the media, and certainly not through the politicians. Some of these bad guys are very, very tough, well conditioned, and trained to resist questioning and frustrate the process. I see many defending the practice of waterboarding in a similar fashion to how the NRA used to deal with gun rights....no room to maneuver, and concession can only lead down a road to defeat. I can picture certain politicians who would not allow a prisoner to be questioned without due process, attorneys present, and the accompanying administrative mess.

I think that those of us who spend time delving into Chesterton(perhaps Belloc even more so) are deeply aware of the concepts of nationalism, worship of the state, "Prussianism", and distributism. From this body of material, one has to question the legitimacy of most of the conflicts which have occurred since the industrial revolution. Mass production of war material, and mass transportation of foodstuffs are necessary for fielding the vast land and naval (later air) forces of a national power. It is ironic that the Middle Ages are seen as so bloodthirsty when they could only fight about 40 days a year due to the requirements of manpower needed to maintain agriculture. CS Lewis made the chilling observation that if war is sometimes just, then peace is sometimes sinful. Most of us know theology of the body enough to recognize the true beauty and goodness of sexuality, and how pornography and promiscuity are shadows and abberations of that good. Likewise, greed and monopolization are distortions of the just use of the goods of this world. I dont think we have even developed the vocabulary to truly make distinctions between the just and holy application of force, and the violent gruesome phantasms of that good. Due to the thoughts of our contemporary pundits, Holy War and Jihad can only be manifestations of fundamentalist rancor. There is a professional and just way of approaching combat and the military life. However, if one is facing a prisoner who, due to time and circumstances of capture can reasonably be known to be in possession of certain knowledge. What does one do when he only stares back, plainfaced or smirking, when being questioned about operations in motion targeting US soldiers or civilians? I think what one must keep in mind, or at least be aware that I have in mind, is that there is a distinction between a 15 year old shepherd thrown on a truck and drafted into the army(or have his family killed), and someone who has been trained at terrorist camps, indoctrinated, and connected to the larger terrorist infrastructure.

I honestly think that the Petreus doctrine really is the answer to this situation, and should be seriously studied by philosophers of Just War, as the factors of modern, multinational, multi-front, and multimedia warfare are vastly different than the type of situations that JW theory developed (evolved :-) ) within. I dont want to talk down to people, but I should provide a very quick summary --also dont want to breach security clearance stuff. The Petreus doctrine turns a counterinsurgency force from being a battlefield maneuver force into behaving more like a highly armed community police force. Winning hearts and minds is accomplished not merely through media efforts, but through putting US bodies in the line of fire in the same neighborhoods where people are being pressured by militias. Rebuilding is done even before insurgent group numbers are eliminated. It is hoped that the populace then sees the militias as standing in the way of progress. In this situation, the necessity of waterboarding and aggressive interrogating is lessened, as the pool of information sources are increased....there are neighborhood leaders and citizens who will likely "snitch" on events, lessening the importance of the information of a single individual.

For as goofy as this sounds, just like theology of the body, I believe that the truth lies not in eliminating negatives, but in adding a positive-- a proactiveness, and structures that affirm humanity and human interaction.

Very informative post, Kyro. And thank you for your service and sacrifice!

I think your blog entry does well to begin bounding a difficult issue. You have some experience in detainee operations and I have been to both SERE and Advanced SERE in my military training. While this definitely gives us some insight, I believe many have too little information to make a definitive ruling on the use of waterboarding and even other methods of coercion in an interrogation environment. Not that they can’t comprehend the issue or make comments but rather a lack of the whole picture. I can say during my experience at SERE, the instructors were able to fool everyone in the class using a variety of tactics whether hard or soft. And some of the “hard” ones were not pleasant by any means. Now if waterboarding becomes out of bounds, does the next “worst” tactic then come under scrutiny. While certainly a glib statement on my part, one man’s discomfort under waterboarding may be the next man’s bath. What I mean by that is everyone has their own flaws that can be exploited and could ultimately be described as “torture”. So again, we come back to actually defining “torture” and it isn’t easy. Now you have brought the “Petreus Doctrine” into the discussion (which I agree with) but I don’t think that is the total answer to this problem as any war will certainly put us in a situation where we need to get tactical information from a non-cooperative belligerent. I’m certainly open to discussion on this issue but to date I don’t think we (as a group here or as a society) have gotten the foundations of the argument down yet for coming up with an answer.

I'm wondering what you and Stu (and Sean and anyone else with military experience) think of John McCain's position which is to say--its inhumane AND it just doesn't work.

Newsmax had what I think is a horrible piece on how McCain is a hypocrite because obviously torture worked on him, because his autobiography confesses that he gave up his name rank and serial number and his intended target after being tortured unmercifully and being threatened with withheld medical treatment.

But I still think that McCain is not speaking out of nowhere--do they have any studies, so to speak, of how effective waterboarding actually is in obtaining valid information?

I too have little patience with such treatment of Senator McCain's wartime experiences. Every man can be cracked in such a situation. While he did technically break the existing Code of Conduct at the time, he gave up no tactically usable information and it was because of the experiences of the POWs in Vietnam that the Code of Conduct was changed to where the objective is to resist as much as one is able and not surrender useful information. It serves no good purpose to be beat for refusing to give up say, information regarding what aircraft you flew, when the wreckage is behind you in smoking hole in the ground.

As to waterboarding. It did work on Kalid Sheik Mohammed. But even with that, I don't think it would be at the top of the list in interrogation techniques for effectiveness. From what I have been taught, it is the softer methods that work better in the long run. But does that mean we want to take it out of our "bag of tricks" given difference in people and situations?

Senator McCain, and others, may think it over the line. I suspect some would say solitary confinement is over the line. I think our problem is that there isn't an acceptable definition of torture.