A review of Table Gype 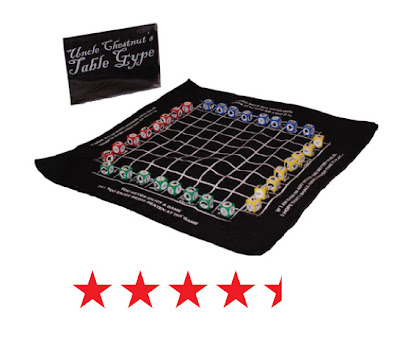 A while back I mentioned Table Gype as a good idea for a tournament at the Chesterton Conference. At the time that was only speculation for I had not played it yet.

I now have this game and highly recommend it to those of you who enjoy playing board games with friends and family.

I know some of you out there have contact with Dale Ahlquist so see if you can get a Table Gype tournament going next year. Add a tankard of beer and some muffins to the night and a good time will be had by all.

While Table Gype is reminiscent of classic abstract strategy games such as Chinese Checkers, it features several elements that make it stand out from other board games. It is played on a cloth mat, and the lines on the board are made to look like they were drawn with white chalk, (something Gilbert always carried in his pocket). The playing pieces are in fact fat colored dice, which get rolled over whenever they are jumped - an effect that limits long-range strategic planning. The side of the dice that is up determines how that piece can move.

The faces of the playing pieces, which Chesterton referred to as "mysterious and significant shapes," are all taken from Chesterton's writings, such as Fire, Swords, and a Tree. The most wildly moving piece is a Hat, and every die has the chance of becoming the dreaded Gype's Ear when rolled. Four of Chesterton's quotations regarding games and playing decorate the board, and several more quotes appear in the rule book. One of the rules that me think of Chesterton is “…it is not polite to touch another player's piece in the course of the game.” It is not forbidden just not polite, something that was mentioned several times the last time I played it with my kids.

The game also has variations; one is for those who don’t like or can’t handle the random element such as small children.

The game is for 2-4 players and is most exciting with 3-4 players.

The only reason I gave it 4-1/2 out of five stars is that when I first received this game in the mail I was ready to play but there is some assembly required. This however was blessing in disguise. While my daughter was putting it together I read the rules. When I was done she was done and we played. It turned out to be an "inconvenience rightly considered". Also as a former marketing director I was not thrilled with the packaging. But hey, you don’t play the box.

Uncle Chestnut's Table Gype is available for purchase from Eternal-Revolution.com,

Table Gype was played at the 2010 Annual Conference of the American Chesterton Society to rave reviews, and a good time was had by all.

It wasn't a tournament, just a bunch of amateurs enjoying the game, which I think Gilbert would have liked. :-)

Guitar Hero from my personal perspective I resolved my concerns artisitc real, I do not want to play at being a musician, I really want to play this kind of music I can listen to Guitar Hero, I congratulate the people I collaborate in this concern.