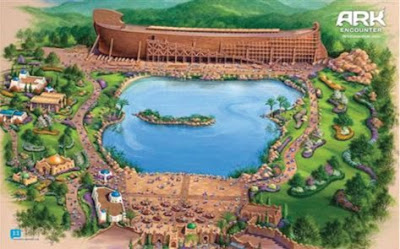 Full Scale replica of Noah’s Ark will indeed big be a big draw at the $150 million biblically inspired theme park, scheduled to open 2014 in Northern Kentuky. Wonder if they will use the same plans from Evan Almighty?

No mention was made if there will be animals in the ark nor if visitors must pass through 2 by 2.
I also wonder if they post this poem by the entrance:

Wine and Water
by G.K.Chesterton

Interesting side note: In nearby Lexington KY., “Evolution World” is also in the works. Although it’s a small novelty vending machine right now, it is expected to develop into a fully functioning theme park in approximately 2 million years.
Posted by Alan Capasso at 9:00 AM