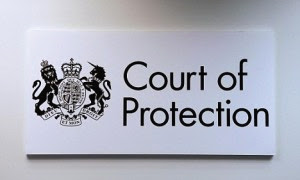 We have all heard of the “Death Panels”in our new health care bill and this begs the question: will we get a Court of Protection?

"A New Theory of Biology" was the title of the paper which Mustapha Mond had just finished reading. He sat for some time, meditatively frowning, then picked up his pen and wrote across the title-page: "The author's mathematical treatment of the conception of purpose is novel and highly ingenious, but heretical and, so far as the present social order is concerned, dangerous and potentially subversive. Not to be published." He underlined the words. "The author will be kept under supervision. His transference to the Marine Biological Station of St. Helena may become necessary." A pity, he thought, as he signed his name. It was a masterly piece of work. But once you began admitting explanations in terms of purpose – well, you didn't know what the result might be. It was the sort of idea that might easily decondition the more unsettled minds among the higher castes – make them lose their faith in happiness as the Sovereign Good and take to believing, instead, that the goal was somewhere beyond, somewhere outside the present human sphere, that the purpose of life was not the maintenance of well-being, but some intensification and refining of consciousness, some enlargement of knowledge. Which was, the Controller reflected, quite possibly true. But not, in the present circumstance, admissible. He picked up his pen again, and under the words "Not to be published" drew a second line, thicker and blacker than the first; then sighed, "What fun it would be," he thought, "if one didn't have to think about happiness!" Brave New World - Aldous Huxley

Yes, G. K. Chesterton thought Huxley’s book sadly laughable, observing that, “However grimly he may enjoy the present, he already definitely hates the future. And I only differ from him in not believing that there is any such future to hate.” Maybe this could be the only place where Gilbert got it wrong, that future is here.