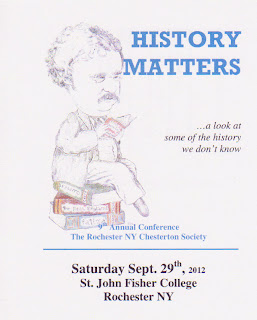 I attended the Rochester (NY) Chesterton Conference September 29th. It's the ninth such conference hosted by the local Chesterton group, and it was one of the best attended ones I've been to. The picture below was taken as people were coming in after a break. Many of these empty seats were actually full. 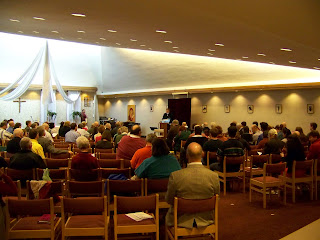 The theme of the days was "History Matters," and we were treated to a number of fine presentations - all delivered with typical Chestertonian levity and wisdom. 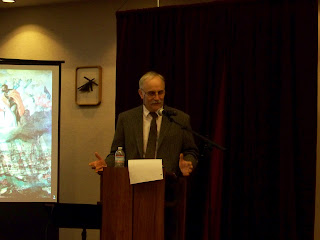 Lou Horvath of the Rochester Chesterton Society served as emcee. 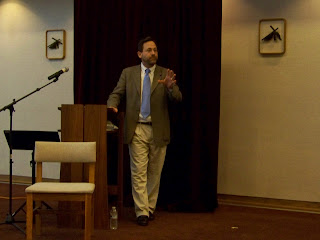 The day began with Christopher Check of Catholic Answers giving us a witty history of the Battle of Lepanto, and then dramatically recited Chesterton's Lepanto - from memory! He deserved the round of applause he received. 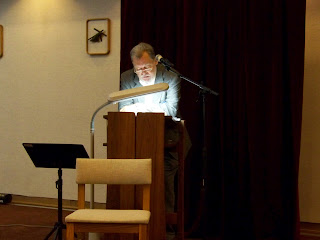 David Higbee of Rochester's St. Irenaeus Center then explored the implications of the appearance of Mary at Fatima. Fatima was a wake up call, he said, and suggested that maybe we still need to wake up. The path to heaven is a narrow one, he noted: "I pray more of us will wake up and pursue that narrow way." 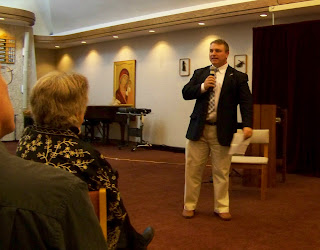 After lunch, writer and editor Joseph Pearce was welcomed warmly, and not with the customary pretend abuse, which took him off guard. (The "abuse" is a running joke, which he always takes in good humor.) Once he recovered, he talked about the history of true England - Catholic England - dating back to Roman days. 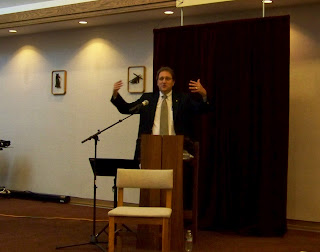 And then there was Dale Ahlquist, who allegedly has something to do with the American G. K Chesterton Society - President or some such thing. Beside talking about the fish that got away, oh wait, different talk. Actually, Ahlquist talked about Arthur, The Most Famous King Not in History.  Ahlquist pointed out how important Arthur has been celebrated throughout English history up until the modern era, and briefly analyzed the significance of Excalibur, the Round Table, and the Holy Grail. He brought Chesterton in, of course. He also humorously referred to the Dark Ages as the "unlettered interlude in history" (a couple of times, savoring the words).
But getting serious, he warned that the Dark Ages are returning. We are witnessing the return of an age of barbarians. But he also reminded us that the Church is the thing that brought us out of those first Dark Ages - and the Church remains.
Indeed, amid all the humor and the wit tossed about by the speakers and during conversations between talks and at lunch, there was a subcurrent of concern about the direction our nation and society are taking. A Dark Ages and a return of barbarians? Maybe.
Overall, a great conference. On a lighter not, after all my years of attending the conferences and entering the raffles, I finally won something: A wonderful Chesterton tee-shirt! And, of course, I bought some books. Plenty of fine reading awaits
And maybe some extra praying as the barbarians draw nearer.
Posted by A Secular Franciscan at 12:00 PM