A Reflection on Andy Rooney and Chesterton 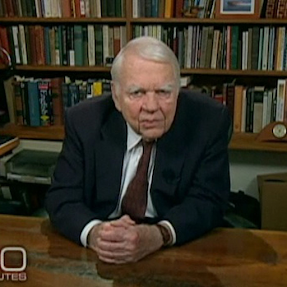 I’ve been reading a collection of short essays by the late Andy Rooney. Anyone familiar with his short commentaries for years on 60 Minutes will find these essays true to form.

I always enjoyed his commentaries. Yes, he was frequently cranky and a bit of a curmudgeon, but so am I.

When I think of the two men, I can imagine Rooney yelling at the kids to get off his lawn, while Chesterton would amble out and join in whatever game the young folks were playing.

As I read, I was suddenly reminded of the essays of G.K. Chesterton. No, not that Chesteron was cranky or a curmudgeon. He was passionate about issues and ideas, but he never showed in his writing the suggestion of anger that underlies some of Rooney’s. And their writing styles are very different. Colloquial language has changed over the years, and Rooney’s writing appeals more to a contemporary American audience demanding short sentences and simplified language. Rooney’s essays are also short when compared with Chesterton’’s. Again, shortness is more the style of contemporary Americans who are more used to sound bytes than sound explanations. Indeed, some of Rooney’s essays seem to end abruptly, almost at a point where Chesterton would just be warming up. And consequently, Rooney’s essays, while they often make valid points, don’t go far enough, certainly not to the depth of thought and insight a Chesterton essay offers..

But there were some things in Rooney’s essays that did remind me of Cheterton’s.

Rooney, like Chesterton, viewed himself as primarily a journalist.

While Rooney could be cranky with an edge of anger, he never seemed mean-spirited, even in criticizing others. In that, he was like Chesterton, who often made good friends of his foes.

The essays also tend to be very personal in nature - much as were so many of Chesterton’s. In the middle of a discussion of some international subject Rooney will suddenly insert a personal experience or memory inspired by the subject at hand.

But what struck me as most similar is that Rooney, like Chesterton, writes about everything, even commonplace seemingly trivial things. He does not necessarily celebrate them as Chesterton does, but he certainly is aware of them in a way most of us are too busy or oblivious to do so. In this particular collection, Rooney expounds on going to the dump, cookies, music, the Super Bowl, newspapers, cooking, semicolons, baseball, cars, and more. I don’t know if he ever wrote about things he found in his pocket, but you never know.

And as he writes about all these seemingly trivial things he often uses them as starting points to ruminate about the world and human nature. Indeed, as happens in some Chesterton essays, when you get to the end you have almost forgotten what he was originally talking about.

Of course, unlike Chesterton, he tended to focus on the negative, If, for example, both men ate a breakfast cereal, Chesterton would probably celebrate the creativity that went into making that cereal and use that as a jumping off point to expound on human creativity in general, while Rooney would more likely wonder about the chemicals and additives in the cereal and the possible negative effects of eating that cereal on his waistline.

I like both writers. I enjoy reading both. But I also recognize that while the essays of Rooney are of their time, the essays of Chesterton are timeless.

Posted by A Secular Franciscan at 1:28 PM