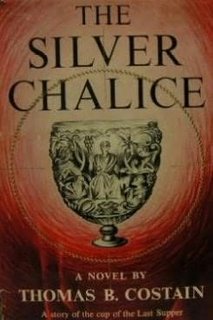 I want to talk, briefly, about Thomas B. Costain.
Born in Brantford, Ontario in 1885, Costain would eventually become one of Canada's most delightful novelists and historians, producing dozens of excellent books. He was the editor of the city of Guelph's newspaper at the age of 23, and the editor of Maclean's at the age of 30. He only began his career as a literary writer, however, after moving to the United States to become the editor of the Saturday Evening Post. His first book, For My Great Folly, was published in 1942; he was 57. He died in 1965 (the anniversary of that death was yesterday, in fact), and is, like our beloved Gilbert, largely forgotten today. In addition to his novels, which could conceivably be "ignored" on the grounds of merely being fiction, he also produced invaluable popular histories on all manner of subjects, such as William the Conqueror and a well-received series about the Plantagenets.
Two of his books concern me here, however, for they are my very favourites of his considerable body of work, and they are certainly both pleasing and accessible to the sort of people likely to be reading this. The two in question were written two years apart from each other: Son of a Hundred Kings in 1950, and The Silver Chalice in 1952.

Son of a Hundred Kings is the remarkable story of one Ludar Prentice, a mysterious child who arrives in Canada, from England, with a hopeful message scrawled across the back of his jacket and no idea where he's supposed to go, or from whence he has come. The man to whom he was supposed to be travelling took his own life on the eve of Ludar's arrival, and he finds himself in a small town of Balfour, Ontario with no past, no future, and something of an odd present. He is taken in by a kindly carpenter named Billy Christian (Costain is occasionally heavy-handed in this way), and the mystery of his past is slowly unravelled. I first read this book while I was down with the flu, and even now I can remember how warm and happy it made me feel. It is not without sadness and villainy, but there is something tremendously cheering about it that burns through. Costain's style is, in contrast to Chesterton's, rather direct and to the point; "unadorned," one might call it. He is certainly capable of delightful linguistic flourishes and edifying digressions, but he keeps them to a minimum.

A more solemn and substantial work, however, may be found in The Silver Chalice, a book that has vied with Tales of the Zombie for my ever-diminishing leisure reading time. A more cynical man might say something observant at this point about the contrast in subject matter, but luckily for us there are no cynics around. I fear I digress, however. The Silver Chalice is a story of the Holy Grail, put simply, but in a more complex sense it's about lots of other stuff too. Basil is a young Greek artist, cruelly deprived of his rightful inheritance by Linus, the brother of his late adoptive father, Ignatius (but not the Ignatius) of Antioch. He eventually comes under the employ of Joseph of Arimethea, tasked with the creation of a glorious receptacle for the cup from the Last Supper, safely hidden away in Joseph's mansion for many years. Basil must travel the length and breadth of the Holy Land - even as far as Rome - to capture perfect likenesses of the Apostles for inclusion in the work. Along the way, he must engage in a spiritual awakening if he is to finally see the face of Jesus in his mind's eye, as His disciples do. The story takes place just after the Ascension, and I think I do not spoil anything by saying that the capture of Paul by the Romans is a pivotal event in the first half of the book.

It is in The Silver Chalice that Costain's craft shines through most beautifully. Everything is plainly and beautifully described; characters are well-drawn but not overdrawn. Much is said about one man or another by the way he stoops his shoulders or taps the bridge of his nose, and Basil's attempts to capture the likenesses of those he meets in clay proves to be a surprisingly effective vehicle for exposing their personalities. And, what's more, I am happy to say that the way in which Costain describes and "writes" the Great Men is nothing short of magical. Here is Luke:

"He had a broad brow and a kindly eye and a smile of such gentleness that each strand of his great red beard seemed to curl in amiability. He was watching, familiarizing himself no doubt with the new faces in the gathering. [His face] was still clear in [Basil's] mind even when the contour of his own father's features had become dim and uncertain. What made it stay was a hint there of seeing things which other eyes missed, of hearing sounds, perhaps of music, in the stillest air."

"The first close glimpse that Basil was thus afforded of this remarkable man was in the nature of a shock. He was surprised to find how old the great apostle had become. Paul's hair and beard were white, and there were both fatigue and suffering in the lines clustering about his eyes and accenting the hollowness of his cheeks. It surprised the youth also that the face that had been turned to him was not an agreeable one. The features seemed to have been cut out of the hardest granite, and the expression was stern. But at the same time he realized it was a compelling face. The eyes under straight white brows were the color of the moon in a daylight sky, strange eyes, disturbing and at the same time fascinating. Basil realized after one glance at this frail old man in his short and unadorned woolen tunic that no one else in the room seemed to matter."

When reading this for the first time, I found myself realizing that this is precisely how I had always pictured Paul in my head, which then led me to consider the fact that the description of Luke was so novel to me because I had never, for whatever reason, attempted to picture Luke in my head at all. I have no idea why.

The point, anyway, is that the books are absolutely worth your time. They are compelling and engaging reads, full of good humour and power. Give them a try, if you ever see them lying around. They tend to crop up in used book stores fairly frequently, so many great deals may be had. If you're more upscale, there's a new edition of The Silver Chalice currently available from Loyola Press which includes an introductory essay by the stalwart Peggy Noonan. It refers - darkly and understandably - to the contrast presented by a comparison of The Silver Chalice to The Da Vinci Code. Both books were at the top of the bestseller list for protracted periods of time, but, of course, fifty years apart. The difference is horrifying. If you can get this edition, or at least browse it briefly in the book store, it would surely be worthwhile.

Note: The Silver Chalice is further notable in that it was adapted into a kind of subpar film in 1954. This would be mildly interesting in its own right, but it's also worth noting that the film served as the launching point for Paul Newman's film career; he played the not insubstantial role of Basil. The film also features an astonishing turn by Jack Palance as Simon Magus, which is itself alone worth the effort to find it.
Posted by Nick Milne at 1:15 AM

Pleased to have found both books on our library exchange program!