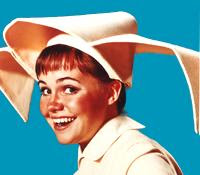 When it comes to the performing arts I subscribe to the basic statement that:

Theatre is life.
Film is art.
Television is furniture.

It is because of this that I generally have no interest in the Emmy awards but it seams this year I missed a lot. Even Bill Donohue of the Catholic League got involved. But Kathy Griffin’s comment was only one of many that made the news. The one that struck me the most funny, (not the Ha Ha funny but the other one), was Sally Field’s comment, “If mothers ran the world there would be no God damn wars.” Griffin’s comment was a lame attempt at comedy that went too far but Sally Field was serious. Putting her blasphemy aside history says she is wrong. Female leaders of countries have and still do send their children to war.

The comment also reminded me of GKC’s comments in What’s Wrong with the World: “Openly and to all appearance, this ancestral conflict has silently and abruptly ended; one of the two sexes has suddenly surrendered to the other. By the beginning of the twentieth century, within the last few years, the woman has in public surrendered to the man. She has seriously and officially owned that the man has been right all along; that the public house (or Parliament) is really more important than the private house; that politics are not (as woman had always maintained) an excuse for pots of beer, but are a sacred solemnity to which new female worshipers may kneel; that the talkative patriots in the tavern are not only admirable but enviable; that talk is not a waste of time, and therefore (as a consequence, surely) that taverns are not a waste of money. All we men had grown used to our wives and mothers, and grandmothers, and great aunts all pouring a chorus of contempt upon our hobbies of sport, drink and party politics. And now comes Miss Pankhurst with tears in her eyes, owning that all the women were wrong and all the men were right; humbly imploring to be admitted into so much as an outer court, from which she may catch a glimpse of those masculine merits which her erring sisters had so thoughtlessly scorned.”

Women were in his time and are now no longer satisfied in being equal in dignity with men they want to be the same as men. Or as my dad once said about the feminist movement, “Women have always run the world. Now they want the title too.”

When women like men run a Government they know that “Government does not rest on force. Government is force; it rests on consent or a conception of justice. A king or a community holding a certain thing to be abnormal, evil, uses the general strength to crush it out; the strength is his tool, but the belief is his only sanction.” (GKC)

Sally thinks that a mother would run a Government like she would run her household which in essence is true and when a household is threatened a women will defend it far more tenaciously than a man. So if she ran a country she could not say to her enemies “Go to your room.” She would spank them and spank them hard with the rod of war.
Posted by Alan Capasso at 7:06 AM

Realistically, has history shown this to be true, that countries under a woman's leadership are at war more often?

I did not say that female leaders have taken their countries to war more often than male leaders it is just that contrary to Fields assumption: female leaders have gone to war and are not immune to the corruptions inherent in power by the mere fact that they have a womb. Probably the two strongest female leaders in modern history were Golda Meir and Margaret Thatcher and they both sent their countries to war. Now IF Fields is saying that if ALL countries were run by women all war would end, she is either naive about the nature of political power or the nature of those who seek it, male or female.
GKC again: “…government is ultimately coercion, that coercion must mean cold definitions as well as cruel consequences.” There are no exceptions for gender.

Indira Ghandi obviously slips the mind of such enlightened folks as these.

Again, as GKC would note, why should facts and examples get in the way of preconceived notions.

I will wage money that, if elected, Hillary will be at least three times the militarist that George W. Bush ever was.

What is that supposed to mean? Are we betting in dollars, euros, dinars, or Yuan? If Hilary wins, some will be worth far more than others........