Date With A Broken Record 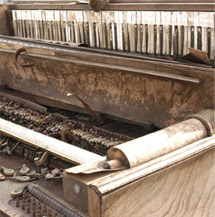 I was thumbing through a new Art History Dictionary I received and the following made me smile, as this kind of comment always does.
------------------------------------
AD or A.D. - Abbreviation for "Anno Domine," which is Latin, and means "in the year of Our Lord." It is conventionally placed before a number to show that it refers to a year following the birth of Christ, although contemporary experts generally agree that Christ was probably born in 3 BCE. These are fundamentals of the Christian calendar. Other cultures designate years according to other schemes. An alternative term for AD is CE, standing for Common Era. Although CE is a less traditional term, it is globally preferred because it avoids the bais inherent in an insistence upon referring to Christ.
Quotes:
"Every scholar I know uses B.C.E. and shuns A.D."Harold Bloom, contemporary conservative scholar, Professor at Yale University, in correspondence quoted by William Safire in No Uncertain Terms, 2003, NY: Simon & Schuster, p 150.
"[The D. in] A.D. [standing for] Dominus means 'lord,' and when the lord referred to is Jesus, ... a religious statement is made. Thus, 'the year of our Lord' invites the query 'Whose lord?' and we're in an argument we don't need."William Safire in No Uncertain Terms, 2003, NY: Simon & Schuster, p 152.
----------------------------------------------------------------------------------
First of all Safire’s book No Uncertain Terms is a fun read and sometimes enlightening but his quote above is of course absurd for the argument he is trying to make. This is because, “…invites the query Whose lord? and we are in an argument we don’t need” it is precisely that argument along with “Who is Lord”, and “What is the nature of our Lord” that shaped and unified the “Common Era”. When someone says “the Common Era” what if another asks, “What makes it the Common Era?”, what answer will be given? I have yet to hear one that did not include the Judeo and Christian ideals. Also it is exactly the argument we do need.
And if we use the nomenclature B. C. E. (Before the Common Era) what is it that makes it uncommon or unattached to each other in that pagan era? There was no consistent common story (outside of the Jews). Or as GKC said “The term "pagan" is continually used in fiction and light literature as meaning a man without any religion, whereas a pagan was generally a man with about half a dozen.” Oops back to a religious statement.
We are the family of man and what is the common thread that binds a family, it is blood and a story. A.D. gives us the unifying blood of Christ and a story that is about His family, which would be us – warts and all.
However, what struck me funny was that it was used in an art history book. If you pile up all the art done before Christ you get different people working out their ideals on different views of the transcendent. If you pile up all the western art done for the past 2,000 years 99% of it is of a religious nature. Even the early 20th century artist grappled with religious issues. It can be argued that weakest art produced in history has been done in the past 6o years where a denial of our story has been the vogue. And the fruits of the denial of universal truth are always banality and boredom. B.C.E and C.E. are boring terms because they have no meat to them.
[As a side note: what really gets me rolling on the floor with laughter is when the HistoryChannel uses BCE and CE when talking about Bible History]
Next let’s look at Harold Bloom who put together the western cannon of must read literature. I will not impute Mr. Bloom’s intelligence on this list but I question two of his entries which relates to the above quote.
The first is he included, under The Ancient Near East Category, The Holy Bible - King James Version. Not only is the King James Version bereft of several books known in the Ancient Near East it is also full of translation errors in the books it keeps.
Secondly and the bright spot on this list is that he does include G. K. Chesterton (collected poems and The Man Who Was Thursday) but he includes him as a 19th century writer and The Man Who Was Thursday was published in 20th. And Bloom does not include any of his other writings – To religious I suppose.
And he puts G. B. Shaw (a long list of books) as a twentieth century writer. He also places H.G. Wells in the twentieth century saying all his science fiction work is a must read. Maybe it is one of the rules at Yale, a former divinity school, that religious thought has to be pushed back to the 19th AD where it’s stuffy but cute and right thinkers are pushed to the 20th CE where he lives.
Posted by Alan Capasso at 3:24 PM

I second your feelings about the use of BCE and CE. I despise them, they are meaningless to me. And how intolerant of Mr. Bloom (et.al.) to be so uninclusive of my feelings.

Bloom includes Chesterton because he wrote a book on Chesterton. However, he perhaps has not actually read much Chesterton, or he would be more Chestertonian. ;-)

The one thing the BCEers and the CEers never mention is what event divides the two.