When You Sing You Pray Twice 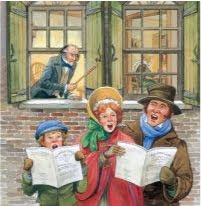 "The modern evil, we have said, greatly turns on this: that people do not see that the exception proves the rule." GKC Eugenics and Other Evils

It is like this: the wall is the rule and the gate is the exception that proves it. The gate proves there is a wall the wall does not prove there is a gate. So the evil Chesterton is talking about is now we have a great expanse of gates and very little wall left.

There are many "social issues" today that bare this out including but not limited to the acceptance of the new Eugenics of assisted suicide.

But this is Advent so let us just look at one expanse of gates; Christmas Songs.
You can do any search for the top 10-20 or 25 Christmas songs and only one (some lists have 2) song talks about Jesus. The winner on most lists was The Little Drummer Boy followed by Silent Night. But then again how can they compete with Santa Baby and I Want a Hippopotamus for Christmas.

The weeks before Advent the Church had been telling the story of the Macabee's. I know the protestants don't "do" those books because Luther cut them due to the fact that they contradicted his personal theology and Henry-duh-8 kept them cut cause the story was a dangerous one for him. The story however is important for us today as it has ever been. It is a story where the people of God finally say "Enough! The government is not our religion and the king is not our God."

Of course I'm not suggesting we do what they did and go into prairie dog town and shoot some holes. But I am saying that we need to speak up and stop the madness.

Changing this simple song list is not as hard as trying to stay safe behind a barrier of gates. And songs have a powerful effect on how we view the world. Call your local radio station and request a true Christmas song. Do it once a day, have your friends do it and then their friends so without a single letter to the editor we can rebuild the wall.
Posted by Alan Capasso at 7:53 PM

I have to say, I have been asking people what their favourite Christmas carols are for a few weeks now, and nearly everybody seems to prefer religious carols. Of course, carols are different from Christmas songs.