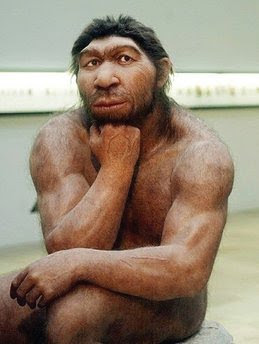 In 2004 Svante Paabo, a paleogeneticist at the Max Planck Institute in Germany, announced he was going to reconstruct the Neanderthal genome. He has yet to succeed in that but is getting close and has a rough draft of the sequence complete. This sequence came from several cells from different samples. But he has yet to find a complete fully intact DNA specimen. But that has not stopped some of the groupies of the scientific community to speculate, "Will we ever clone a caveman?"

Since my son and I are Sci-fi nuts this prompted a lively discussion. Since Neanderthals are not considered human is there an ethical question? If the non-human speculation is correct they would not have souls? But what if the assumption is wrong - who decides? (These questions got batted around but they were beyond our pay grade and won't help with our screen play anyway. Where is Michael Crichton when you need him?)

How do you find a woman to carry this cave man to birth? The reality show fame alone would attract hundreds. "We could easily get those girls who want to sleep with Flava Flav." my son said.

What about the the new modern life of this cave man? Can you see him in public schools? A boy scout making his first fire? What about when he enters Junior High and the peer pressure to look good makes him ask his Mom for a piercing? Can you say sitcom?

As an adult he would have a career as commercial actor for insurance or a great career as a NFL linebacker.
Posted by Alan Capasso at 6:46 PM