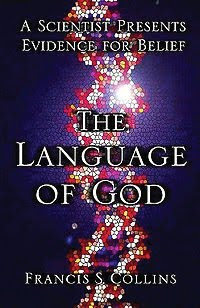 In the, for lack of a better word, battle between science and religion some voices of reconciliation are being heard. Not because of their volume but from where they speak. Francis Collins is one such voice. He is one with impressive credentials being the director of the Human Genome Project and all; that little hobby of his that mapped the vast vocabulary of life's indwelling "grammar". Collins calls this grammar the language of God.
In his book, The Language of God, Collins systematically lays out a philosophy that science and religion are not only complementary but are both essential for a complete understanding of the world.

Yea, yea I know the premise of the compatibility of God and reason has been expressed elsewhere and with better poetry as with Thomas Aquinas, " For Faith is not opposed to reason but is of that which reason cannot reach." Or as JP2 said, "Faith and reason are like two wings on which the human spirit rises to the contemplation of truth..."
The cool thing about this book is how he came to write it. Collins was homeschooled in an non-religious home - "freethinkers". Religion to him was something quaint and unrealistic so atheism was his logical choice for a world view. That was until he became a doctor and noticed the difference between the religious and non religious patients in how they faced grave and mortal illnesses. The religious ones faced it bravely and peacefully the later spent their time in a panic. When one of his patients asked him about his belief system he knew, as a scientist he could only answer this question with research and careful consideration.

His study led him to Christianity. True, that's an old story but I never grow weary of hearing it. Collins openly credits our friend C. S. Lewis' book Mere Christianity for his spiritual Big Bang moment.

True not all of his writing and many of his other views do not square-up to orthodox Christianity but he is still young in this strange new land and he is courageous.
As he is willing to debate all comers on what Collins calls BioLogos, including Richard Dawkins.

For you Homeschoolers Collins' book would be a good addition to your science library and its a good read for us science groupies.
Posted by Alan Capasso at 10:37 PM