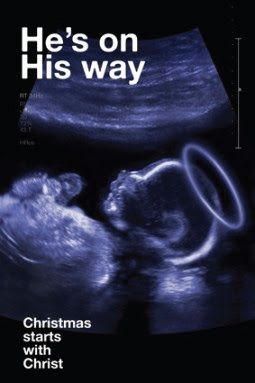 Around this time each year we are bombarded with messages that try to get Christmas removed from the calendar. Personally I love this ad but the chattering class is "offended" by it.

Here’s a sample of the criticism this ad campaign is receiving:“It gives the impression that it was politically motivated, that they are trying to put across some sort of subliminal message,” said Terry Sanderson, director of the National Secular Society. “The image is too specifically associated with pro-lifers to be seen in a benign context. They should go back to angels and cribs.”

Angels and cribs???!!! Don't they know that Angels are militantly politically, they are working and fighting to get everyone into THE Kingdom. And what, today, is more counterculture than the image of a crib.

In Philip Schaff's, History of the Christian Church, Volume III: Nicene and Post-Nicene Christianity. A.D. 311-590 we read: "For this reason the Saviour assumed humanity, that man, united with life, might not remain mortal and in death, but imbibing immortality might by the resurrection be immortal. The outward preaching of redemption would have to be continually repeated, and yet death would abide in man.”. The object of the incarnation is, negatively, the annihilation of sin and death; positively, the communication of righteousness and life and the deification of man. The miracles of Christ are the proof of his original dominion over nature, and lead men from nature-worship to the worship of God. The death of Jesus was necessary to the blotting out of sin and to the demonstration of his life-power in the resurrection, whereby also the death of believers is now no longer punishment, but a transition to resurrection and glory.—This speculative analysis of the incarnation Athanasius supports by referring to the continuous moral effects of Christianity, which is doing great things every day, calling man from idolatry, magic, and sorceries to the worship of the true God, obliterating sinful and irrational lusts, taming the wild manners of barbarians, inciting to a holy walk, turning the natural fear of death into rejoicing, and lifting the eye of man from earth to heaven, from mortality to resurrection and eternal glory. The benefits of the incarnation are incalculable, like the waves of the sea pursuing one another in constant succession."

Some see dem as fighting words
Posted by Alan Capasso at 1:41 PM