"St. Jerome lived with a real lion; a good way to avoid being lionised. But he was very sociable with the lion. In his time, as 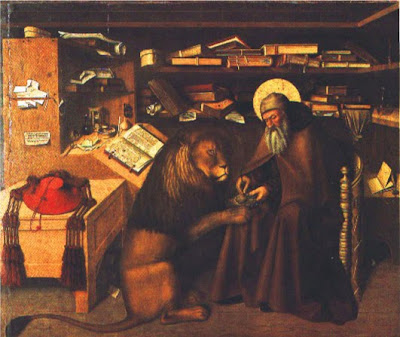 in ours, sociability of the conventional sort had become social suffocation. In the decline of the Roman Empire, people got together in amphitheatres and public festivals, just as they now get together in trams and tubes. And there were the same feelings of mutual love and tenderness, between two men trying to get a seat in the Colosseum, as there are now between two men trying to get the one remaining seat on a Tooting tram. Consequently, in that last Roman phase, all the most amiable people rushed away into the desert, to find what is called a hermitage; but might almost be called a holiday. The man was a hermit because he was more of a human being; not less. It was not merely that he felt he could get on better with a lion than with the sort of men who would throw him to the lions. It was also that he actually liked men better when they let him alone. Now nobody expects anybody, except a very exceptional person, to become a complete solitary. But there is a strong case for more Solitude; especially now that there is really no Solitude."
G. K. Chesterton: The Case for Hermits

God’s angry man, His crotchety scholar
Was Saint Jerome,
The great name-caller
Who cared not a dime
For the laws of Libel
And in his spare time
Translated the Bible.
Quick to disparage
All joys but learning
Jerome thought marriage
Better than burning;
But didn’t like woman’s
Painted cheeks;
Didn’t like Romans,
Didn’t like Greeks,
Hated Pagans
For their Pagan ways,
Yet doted on Cicero all of his days.

A born reformer, cross and gifted,
He scolded mankind
Sterner than Swift did;
Worked to save
The world from the heathen;
Fled to a cave
For peace to breathe in,
Promptly wherewith
For miles around
He filled the air with
Fury and sound.
In a mighty prose
For Almighty ends,
He thrust at his foes,
Quarreled with his friends,
And served his Master,
Though with complaint.
He wasn’t a plaster sort of a saint.

But he swelled men’s minds
With a Christian leaven.
It takes all kinds
To make a heaven.

From "Times Three" by Phyllis McGinley

Thanks for the great quote from G.K. I enjoyed it! Very apropos.