Dicit ei Pilatus quid est veritas (Jn 18:38)
Alan's post of last Thursday, Still wearing my ID bracelet, sparked some good comments. In the combox, “Chestertonian” mentioned a favorite story of mine: Tolkien's creation myth in The Silmarillion. Tolkien, a man considered here to be a friend of GKC, loved truth, and he loved myth as an expression of truth. The word myth seems to be defined as “a delightful lie” in the mind of many, but it should not have this connotation.

Joseph Pearce, biographer of both Chesterton and Tolkien, was interviewed by James Person for The University Bookman (Fall 2004, link); in the interview Pearce says “What I call Tolkien’s philosophy of myth is the fact that mythology is the only means of expressing adequately metaphysical truth—because truth is metaphysical, facts are physical. Now, let’s go back a step for a moment: G. K. Chesterton wrote, 'Not facts first, truth first.' This is the key thing, because we need to differentiate between facts and truth. Facts in the sense that Tolkien and Chesterton were referring to them are physical realities. Truth is the metaphysical realities that inform the facts.”

John Paul II made a similar point when talking about Biblical interpretation. In an October 1981 address to the Pontifical Academy of Sciences he said: “The Bible itself speaks to us of the origin of the universe and its make-up, not in order to provide us with a scientific treatise, but in order to state the correct relationships of man with God and with the universe. Sacred Scripture wishes simply to declare that the world was created by God, and in order to teach this truth it expresses itself in the terms of the cosmology in use at the time of the writer. The Sacred Book likewise wishes to tell men that the world was not created as the seat of the gods, as was taught by other cosmogonies and cosmologies, but was rather created for the service of man and the glory of God. Any other teaching about the origin and make-up of the universe is alien to the intentions of the Bible, which does not wish to teach how heaven was made but how one goes to heaven.” (link)

I don't know from where this exact quote comes, or even if Chesterton wrote it that way; but it is certainly a good synthesis of what Chesterton wrote. A fact, or a collection of facts, is not the whole truth. Chesterton's interest was in pointing towards the whole truth. In so many things he wrote Gilbert was helping his readers to overcome misconceptions of facts and truths. In his fiction: “'Facts,' murmured Basil, like one mentioning some strange, far-off animals, 'how facts obscure the truth.'” (The Club of Queer Trades); in his philosophy: “I am concerned with a certain way of looking at life, which was created in me by the fairy tales, but has since been meekly ratified by the mere facts.” (Orthodoxy); and especially in his biography St. Thomas Aquinas when Chesterton wrote that St. Thomas “was willing to allow the one truth to be approached by two paths, precisely because he was sure there was only one truth.”

St. Thomas was ready to fight for the doctrine that the Faith and scientific study would not yield two opposing 'truths' (whatever that could even mean); Chesterton thrills us this with the sentence: “So, in his last battle and for the first time, he fought as with a battle-axe.”

The Dumb Ox went off to war, to fight for the Truth, and it seems the battle never ends. 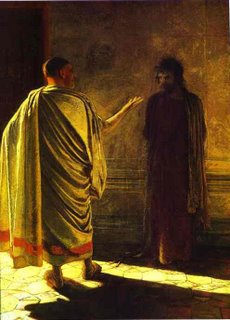 It does seem that Superman may have arisen from an unconscious desire for the Messiah to come, considering the age in which the tale began.

Of course for us Christians, we know that technically, when the Messiah comes, this would be His second return.

Have attempted to explain to non-Christian friends who do not acknowlege Christ as their Messiah, that He came to champion us from the inside first, to make us worthy of the Kingdom of Heaven-

But that He is indeed the same Guy.

Pardon- this was posted in the wrong combox...

Then again, didn't Chesterton say that there's really no such thing as a different subject:)

Northrop Frye wrote that "The myth is the story that is more true than fact." Myths are about BIG things - the Life, Nature, Existence itself. There are myths about how the world came to be, because the mere fact that it IS is more perplexing than any mechanical question of what might have happened where and how.